Last Saturday, on January 31st, we celebrated Jean Simmons’s 86th birthday. Unfortunately, I was busy with The Dueling Divas Blogathon, so I didn’t have time to write a tribute to her like I always do when it’s the birthday of a star I love. Instead of waiting next year (I’m not patient enough for that), I decided to write this tribute today because Jean Simmons was a fantastic actress and she really deserves a tribute. Sometimes, I wonder what classic films would have been like without Jean Simmons. She may not have been the MOST influential star of the screen, but her presence was, for sure, a big privilege for us, classic movie fans. If you have seen my top 10 favourite actress, you may have noticed that Jean Simmons is my 6th favourite one. It goes without saying that I love her a lot and, today, I’m going to explain you why. 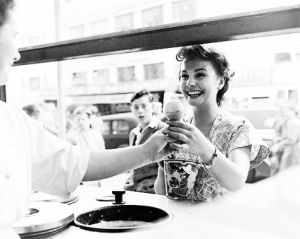 First of all, you may know that I love the classic British cinema and its stars. Jean Simmons starred in American films, of course, but she started her career with roles in British films as she was born in London. Jean was only 15 years old when she starred in her first movie: Sports Day, directed by Francis Searle. That was certainly not her most famous movie. From her early British career, the Jean Simmons’s films that we remember the most are Great Expectations (David Lean, 1946), Black Narcissus (Michael Powell and Emeric Pressburger, 1947) and Hamlet (Laurence Olivier, 1948). She received a Best Supporting Actress Oscar nomination for Hamlet. Jean Simmons never won an Oscar and, according to me, that’s a shame because, from what I’ve seen, she gave memorable performances that deserved an Oscar more than some other performances that actually won one.

The fact that Jean Simmons was an English actress had a good influence on her voice. Because yes, Jean Simmons voice is just one of the nicest actress’ voices to hear. It’s sweet, calm, very well articulated. It’s music to our hears; when she talks and when she sings too. It’s a voice I could recognize everywhere. 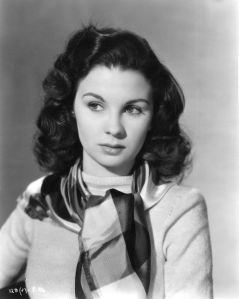 What I also love about Jean Simmons is her acting versatility. She can be tragic in movies like Spartacus, or funny in movies like Guys & Dolls. However, it seems that she plays, quite often, a very likable character, someone with whom I would l like to be friend with. I know, it’s not the case for all her films (Great Expectations, for example), but it is for those I have seen so far: Guys and Dolls, Spartacus, The Big Country, She Couldn’t Say No and Uncle Silas. You may say five is not a lot, but one was enough for me to add her to my list of favourite actresses. Watching the rest just confirmed my huge admiration for her. There is, of course, many of her movies I would LOVE to see: Elmer Gantry, Hamlet, Great Expectation, Young Bess, Angel Face, The Blue Lagoon, Black Narcissus, etc. Anyway, so much fun’s coming for a fan of Jean Simmons!

The beautiful Jean Simmons sometimes makes me think of Audrey Hepburn who is my favourite actress. She’s lovely, bright and lively. She also looks a little like her. And did you know that she was William Wyler’s first choice for the role of Princess Ann in Roman Holiday?! I would have been curious to see her in that film. I’m sure she would have been great, but I’m happy they finally chose Audrey as it is my favourite movie of her and my favourite performance of her also. Luckily, we had the chance to see Jean in another William Wyler’s film, the excellent The Big Country.

I will now talk to you more precisely about Jean Simmons’ performances in the films I saw. Let’s start with Guys & Dolls, a movie directed by Joseph L. Mankiewicz in 1955 and starring Jean Simmons, Marlon Brando, Frank Sinatra, and Vivien Blaine. This is my favourite movie of hers. It’s a colorful film with great musical numbers and four unforgettable stars. Believe it or not, the first time I saw it, I didn’t like it that much. I found it ok, nice, but not more. And then, long after my first viewing, I decided to buy it and give it another chance. Immediately with my second viewing, it became one of my favourite movies. I really don’t know why I didn’t like it that much the first time I saw it! One thing I love about this film is the fact that it was directed by someone who had never made a musical before. We know Mankiewicz for movies like All About Eve, The Ghost and Mrs. Muir, Julius Caesar, Cleopatra, all movies that have nothing to do with musicals. On the same idea, except for Vivien Blaine and Frank Sinatra, he cast two other leading stars who had never played in a musical before: Marlon Brando and our Jean Simmons. And the most fantastic thing about that is that he decided to use their own singing voices! Jean Simmons’ voice was beautiful, as I said earlier, and it’s a good thing they didn’t double it. Jean Simmons performance in this film is unforgettable. We love to see her sing and dance with Marlon Brando. She’s also very funny. That was her second movie with Marlon Brando, who is my second most favourite actor, and I must say that their chemistry together is great. Well, it seems to be! This moment when they’re having dinner in Havana, Cuba is memorable. Now, let’s watch Jean sings If I were a Bell, one of my favourite tunes of the film!

The second Jean Simmons’ film I saw was The Big Country, a western directed by William Wyler in 1958 and starring Jean Simmons, Gregory Peck, Charlton Heston, Carroll Baker, Burl Ives, Chuck Connors, and Charles Bickford. All great stars, as you can see. Something that many people love about this film is the wonderful score composed by Jerome Moross. On my side, I also love the story and the cast, especially Jean Simmons and Gregory Peck. They were great together. In this Western, Jean Simmons plays the role of Julie Maragon, a young girl from the country who owns a ranch and has to face her annoying neighbors who want to buy the ranch. She plays a strong and courageous woman who is also a strong leader and who knows how to handle the problems she has to face. She plays an intelligent woman and her performance was intelligent too.

Jean Simmons’s performance in Spartacus (Stanley Kubrick, 1960) is, for me, her best one (so far). It’s that performance that confirmed to me that she was an immensely talented actress. It was a strong, touching, emotional and unforgettable performance. Her acting in the final scene is just perfect. In my opinion, she should have won, at least an Oscar nomination for this role. In Spartacus, Jean Simmons plays the only female role. She is Varinia, a prostitute slave who falls in love with Spartacus, the famous historical slave of the Antic Rome who led a slave revolt. One more time, Jean Simmons chemistry with the leading man (Kirk Douglas) is very good. I mean, she often seems to have a great chemistry with the other actors. Did they really get along in real life? I don’t know a lot about Jean Simmons life. I know more her films and her performances in those films, but she didn’t seem to be the kind of person we can get mad with.

Jean Simmons, Kirk Douglas and Tony Curtis on the set of Spartacus

Not a long time ago, I watched She Couldn’t Say No (Lloyd Bacon, 1954). This was the second movie starring Jean Simmons and Robert Mitchum. The first one was Angel Face, a Film Noir directed by Otto Preminger in 1952. She Couldn’t Say No is a comedy. It’s always nice to see Jean Simmons in a film of this genre (and Robert Mitchum too!) because she knows how to be funny and it’s always a delight. In this film, she plays the part of the wealthy Corby Lane, a young woman who is back to a little town where the residents had paid for her critical medical operation when she was a child. Grateful, she is back here to give them money anonymously. She meets the doctor Robert Sellers and then, nothing will be the way she would have liked. This is a nice and easy movie to watch. I wouldn’t say it was Jean’s best performance, but it certainly is a worth watching film for Jean’s fans.

Yesterday, I watched Uncle Silas ( Charles Frank, 1947), which stars Jean Simmons, Derrick de Marney, and Katina Paxinou. In this British mystery, Jean is Caroline Ruthyn, uncle Silas’ niece, who becomes his guardian after her father’s death. The uncle seems to be a nice man at first, but Carolyn, who is the heiress of her father’s fortune, has to be careful, especially when she discovers that her uncle works with her former governess, the horrible Madame de la Rougière. This was one of Jean Simmons’ early British films and also the first one I saw. She was only 18 when she played in it. I always love to see a star acting in a movie when she is almost my age (I’m 19). It’s another way to identify with her. I loved her performance in this film. It was brilliant and full of sensibility. She was so adorable in it and, when something sad happened to her and someone was mean to her, I just wanted to go in the screen and console her. The moments when she cries are heartbreaking because we don’t want anything bad to happen to Jean! Jean’s close-up at the end of the film was marvelous and shared all her beauty. 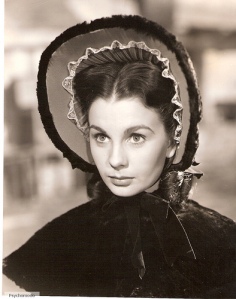 Well, Jean Simmons was an incredibly beautiful and talented actress. I always enjoy watching her movies and I want to see much more of them. I think it’s impossible not to like this actress. Or, if you do, you better have a very good reason!  I know her birthday was on the January 31st, but I can’t help it: Happy belated birthday wonderful Jean, wonderful angel of the silver screen! 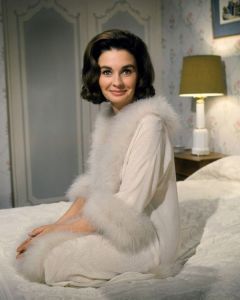 8 thoughts on “Jean Simmons: Angel of the Silver Screen”