I didn’t know what to expect, but when I saw it for the first time,  Airport became one of my favourite movies of the 70’s. Directed by George Seaton (Miracle on 34th Street, Apartment for Peggy, The Country Girl) in 1970, it tells the story of many people who have to deal with a snowstorm in an airport in Chicago and with an explosion in a plane. Many great stars are in this disaster movie: Burt Lancaster, Jacqueline Bisset, Jean Seberg, Dean Martin, George Kennedy, and, of course, Helen Hayes. My text will focus on this last one because her outstanding performance in Airport is the topic I chose for the first subject of the 31 Days of Oscar Blogathon: The Actors.

Helen Hayes’ performance was my favourite one in this film. I mean, she was so great! After I watched it, I said to myself: “Well, it would have been nice if she had won an Oscar for this film.” You can’t imagine my surprise when I read on the web that she DID win an Oscar! She was awarded Best Supporting actress and truly deserved it. I was so happy for her when I read that! This was not Mrs. Hayes’ first Oscar-win. Earlier, she won the Best Actress Oscar for her performance in The Sin of Madelon Claudet (Edgar Welwyn, 1931). She wasn’t at the Academy Awards ceremony when she won the Oscar for Airport, so actress Rosalind Russell accepted it for her and said some shorts, but beautiful words about Helen. She described her as “the first lady of theater”. I didn’t know Helene Hayes very well because the only movies I have seen with her before Airport were A Farewell To Arms (Frank Borzage, 1932) and Anastasia (Anatole Litvak, 1956). These were some beautiful performances, but it’s really Airport that made me fall in love with her talent. Now, I can’t wait to see more of her movies, but, for the moment, let’s concentrate on Airport and her wonderful acting in this film. 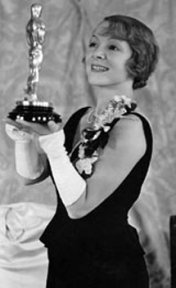 In Airport, Helen Hayes plays the role of Ada Quonsett, a funny little old lady who is arrested by the airport authorities and brought into the airport manager’s office because it has been discovered that she is a stowaway, without paying a plane ticket. She explains to the manager, Mel Bakersfeld (Burt Lancaster) and to Tanya Livingston (Jean Seberg), the customer relations agent for TGA, that she does that to go see her daughter in New-York. So, she tells them how she gets on the plane without paying. Tanya is discouraged, but Mel thinks it’s quite funny. So, Tanya asks to Peter Coakley (John Findlater), a young man who works at the airport, to watch her before they put her on a plane to send her back to California where she comes from. Not a long time after, she fakes a faintness and goes to the ladies and asks Peter to go find a doctor. Well, it’s just one of those trick to run away and go on the plane for Rome, flight Two, and not the one for California. As always, she succeeds going on the plane without paying a ticket. Unfortunately, the passenger seated next to her, Mr. D.O. Guerrero (Van Heflin), a desperate man who has a bomb in his suitcase and who wants to blow up the plane. Mrs. Quonsett doesn’t know anything about that. The aircraft crew, who is now aware that Mrs. Quonsett is a  stowaway and also that Mr. Guerrero carries a bomb in his suitcase, asks for her help. So, they organized a mise-en-scène to take possession of Gerrero’s suitcase:  the chief stewardess, Gwen Meighen (Jacqueline Bisset) gets mad at Mrs Quonsett so this one begins to panic and then asks for Guerrero to help her while holding his neck. Gwen seizes the occasion and tries to take his suitcase, but Gerrero succeeds to keep it and runs away next to the plane’s bathroom. The checkride captain (Dean Martin) tries to calm him, but someone comes next to him and Guerrero panics, goes in the plane bathroom and there’s an explosion. Gwen, who is standing next to the toilets, is badly hurt and the aircraft crew has to handle the situation and comfort the passengers. The plane has to go back to Chicago Airport and lands there to be safe, but there is another plane stuck in the snow on the airstrip. Joe Patroni, the chief mechanic (George Kennedy), succeeds the procedure and the plane from flight Two succeeds its landing. Gwen is brought to the hospital and Mrs. Quonsett is going to the flight for California, but in first class, because she helped the aircraft crew. 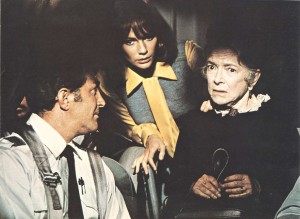 What I love about Helen Hayes’ performance in Airport is the fact that she is just so funny and so adorable. She sure does some illegal stuff, but we can’t be mad at her because she is just so nice and so friendly. She always has this big smile on her face that makes her look so innocent even if she’s not. She certainly knows how to handle the situation! What’s also fantastic about Helen Hayes’ performance is that she has a great aptitude to change her emotions easily. She has this innocent smile and then, she has a worried face because something goes wrong with her plan. Helen Hayes also knows how to play the comedy. That’s why Ada Quonsett becomes someone very important in the film even if she is not the main character. I mean, what would be this film without her? It’s a good movie, I love it, but her presence brings a little extra that is well appreciated.

Helen Hayes acting in Airport is excellent on every level: when she talks, but also when she moves. All her moves are made with such precision and fit perfectly her character’s personality. She is a stowaway but she has good manners. She walks with little footsteps and holds her handbag with both hands. Her back and her neck are very straight, her eyes a wide open because she watched the surroundings. The scene where she goes in the plane’s toilets and then checks if the stewardesses have finished checking the passengers’ tickets is also pretty funny, just like the moment when she thinks that Gerrero is participating in a contest and has to guess the plane arrival in Rome, or when she takes this snobbish attitude because she is going to travel in first class for her flight back to California. I also love the chemistry she has with the other actors in the film, especially with John Findlater. He has to watch her, but he becomes his confidant in a certain way. He is also the type of person who is easy to manipulate.

Anyway, I just love Helen Hayes in Airport, from the moment she walks in Mel’s office until the end of the film. The moment where Mel and Tanya see her coming is quite funny because they are so surprised! They just don’t expect that this dangerous stowaway is an innocent-looking little old lady! Every moments of the film with her are the best and really amaze me because they show Helen Haye’s versatility (in A Farewell to Arms, she is dramatic, but in Airplane, she is funny). I’m so happy to have seen this great film, especially for this brilliant performance. Another character who is very interesting in this film was Mrs. Harriet DuBarry Mossman played by Jessie Royce Landis in her final feature film. Unfortunately, she only has a two minutes scene. I would have loved to see more of her. 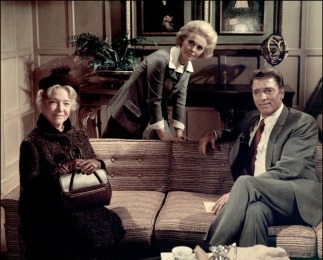