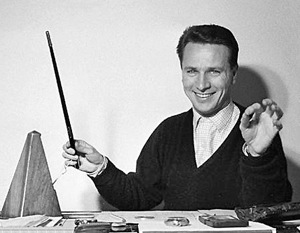 My friend Carol from The Old Hollywood Garden just posted her top 10 favourite movie scores that you can read here. I thought it was a marvelous idea and I’ve decided to do the same. Of course, I wasn’t able to stick only to 10, so decided to go with a top 20 instead. And well, it was about time for me to make a new top on this blog. Wasn’t it? 😉 While I’m writing this, the beautiful Casablanca score is playing. 🙂

Just like Ingrid Bergman was, Spellbound score is completely fascinating. I could listen to it for hours. It’s so bewitching. Miklós Rózsa perfectly composed it and knew how to include it in the film. Together, the moving images and the soundtrack create a wonderful choreography. I just love love love this score. It hypnotises me.

#2. How the West Was Won (Alfred Newman)

For a long time, this was my favourite movie score (until I discover Spellbound‘s one). I think the perfect word to describe it would be “EPIC”. It kind of gives you strength when you listen to it.

When the film starts, you are immediately captivated by it and that’s because of the brilliant and thrilling score composed by Franz Waxman. It greatly reflects the tension in this film.

This one is not often cited as a favourite, but you have to listen carefully to it to discover that it’s such a beautiful music. It sounds like it was composed for a fairy tale. Well, Roman Holiday is almost one, but still isn’t one. We can, for sure, perfectly associate it with Audrey Hepburn’s character: a princess.

Isn’t that one of the most well-known movie score? The first time I watched the film and heard that score, I immediately recognized it. When you hear it, you can imagine Lawrence of Arabia or blue-eyes Peter O’Toole crossing the magnificent desert on his camel.

Rebecca’s score cleverly starts the film with those images of the growing vegetation around Manderley. We are then led to Joan Fontaine’s voice saying one of the most famous opening line “Last night I dreamt I went to Manderley Again” (Daphné Du Maurier).

#7. The Inn of the Sixth Happiness (Malcolm Arnold)

This glorious score is one of the many reasons why this film is so powerful. It makes a perfect team with Ingrid Bergman’s performance and makes us appreciate how great orchestral music is.

Well, looks like Ingrid Bergman knew how to be part of movies with great music! Did she inspire the composers? Max Steiner composed a magnificent score, mixing it with La Marseillaise. And how can we forget that tune, “As Time Goes By”?

That is another EPIC score for sure. I think it reflects perfectly the era in which the film takes place, the Roman Empire. It’s the perfect score for this type of film.

John Williams most well-known collaboration with Steven Spielberg is certainly “Jaws”, but Schindler’s List score is by far the most touching one. This sad and poetic music illustrates perfectly the mood of the film, just like its quality.

Bernard Hermann was well-known for its several collaborations with Alfred Hitchcock, but we have to admit that his Taxi Driver‘s score is one of his best. Sadly, it was his last one, but it ended his career in an unforgettable way. I adore the opening titles of this film. When we see the cab coming out of the smoke and the music starts: a unique moment.

John Williams before Steven Spielberg. The film was released in 1966 and it’s certainly not this one that made John Williams a star, but we have the right to enjoy it. This enchanting music remains the work of a genius.

What I like about this score is that it’s so relaxing. It makes you think of summer vacations. It makes you want to be on the beach, swimming or doing nothing. Well, I think that was the objective. The music in this film plays a great role. It marks the beginning of the days and it seems to be the only music that exists in this world.

Well, my list wouldn’t be one without a Hans Zimmer’s score. In my opinion, he is one of the most brilliant contemporary movie composers. I don’t know what I like specifically about this score. It’s kind of bewitching I guess. I also love the film as well and when I listen to this score, I always say to myself “Why am I not the one who directed this film?”

What I like about this score is that it doesn’t sound like it was composed for a film. There’s also something very “modern” about it. It adds a great dimension to The Third Man.

Now, this wouldn’t be a  top of mine without a Hitchcock-Hermann collaboration. North by Northwest score was once my favourite one, that’s why it’s my choice. Well, also because it’s a truly great score!

Ok, let’s all whistle together! 😀 Once we’ve heard this score, we can’t forget it. I remember there was a time I was ALWAYS listening to it.

Just like the film is not very famous, it’s not Alex North’s most famous score either, but it remains a clever one. Here, we dive into a more military music. This moment when the Canadian arrives, marching on this music is simply the best part of the film.

Alfred Newman started his career in film in 1930 and 40 years later he was still able to prove to us that he still was an excellent movie composer with Airport. Sadly, it was his last movie score, but one we can’t forget.

Gone With the Wind‘s beautiful score brings us into the world of Scarlett O’Hara. When you listen to it, it gives you chills but makes you feel good and strong at the same time.

Well, that’s it. I’d be curious to know your choices!

You know, listening to those marvelous scores just makes me want to WATCH FILMS! That’s what I’m about to do now.

3 thoughts on “Top of the World: My top 20 Favourite Movie Scores”