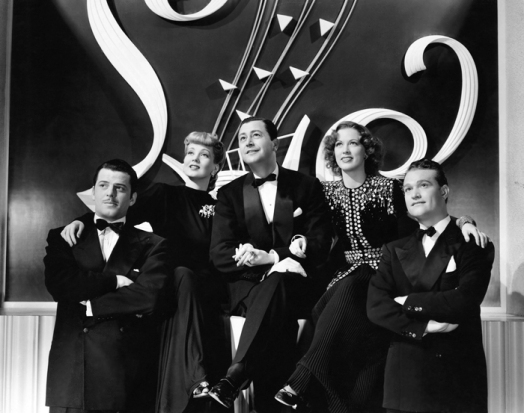 What is the result when you combine Gershwin’s music to Berkeley’s choreographies? Lady Be Good, of course! A lovely 1941’s backstage musical directed by Norman Z. McLeod. Today, it’s the perfect occasion for me to talk about this film as I am participating to the Backstage Blogathon hosted by Movie Silently and Sister Celluloid.

Lady Be Good starts in a tribunal when singer Dixie Donegan (Ann Southern) explains to the judge what led her to ask for a divorce. Her friend Marilyn Marsh (Eleanor Powell), a talented dancer, is here as a witness. Dixie had met composer Eddie Crane in a restaurant and they actually made a team together when they discovered Dixie had the talent to write lyrics for his music. Their compositions became successful and they eventually get married. But once a husband, Eddie had no longer “time” for work, which didn’t suits Dixie’s lifestyle. She obtains the divorce, but she still loves him. As Eddie is much more productive when he’s not married, they continue collaborating together and compose big hits such as “Lady Be Good” and “The Last Time I Saw Paris”. Marilyn, who knows that they still love each others, will do the impossible to bring them back together again.

Lady Be Good is not a masterpiece, neither an “excellent” film. Just like its title, it’s a “good” film. It’s actually very pleasant and entertaining. It makes you feel good, just  like a breath of fresh air. On my side, the reason why I first saw this film is because I wanted to watch more Robert Young’s films. So, I checked what was available on iTunes and saw this one. Really, I had never heard of it so, yes, we can say it’s the title that appealed to me. Also, I love musicals and I had never seen any Eleanor Powell’s movie before. So, why not?

Lady Be Good regroups a very interesting cast. Every actor can “do something” if you see what I mean.

Ann Southern has a truly beautiful melodious voice. She certainly is one to discover for her singing talent. Concerning her acting skills, she has a great sense of comedy and makes an interesting partnership with Robert Young. What I particularly like about her character, Dixie, is that she makes you want to compose a song. She makes it look easy, but, of course, it’s only a film.

The main reason why I love Robert Young might be because he reminds me of James Stewart (my favourite actor). He isn’t as much a great actor, but his on-screen presence is so appreciated. If we saw him in some films noir such as Crossfire, Robert Young was particularly known for his roles in comedies. His “cutie pie” smile makes him look quite friendly and we can’t help smiling when he makes his first entrance. I can say this is probably one of my favourite roles of his. However, what makes me laugh is that, even if he plays a pianist in this film, we easily can say he wasn’t a pianist at all, or maybe not as good as Eddie Crane. You know, this moment when a character plays piano and closes his eyes at the same time, looks somewhere else or has a very philosophical conversation with someone while playing? I can tell it’s fake. Except if you play a short and easy tune, playing piano requires a minimum of concentration. However, we can boast Robert Young for another musical talent: his singing voice. I was surprised to hear him sing in this film, first thinking he was only playing piano, but it turned out that he doesn’t have a bad voice at all! 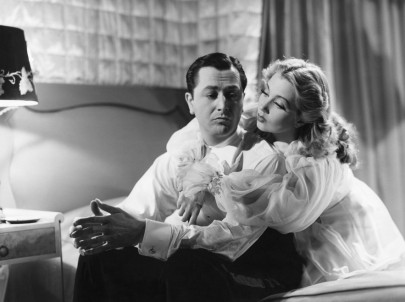 Eleanor Powell embodies the art of dance in Lady Be Good. Some people told me that she was, according to them, the best dancing actress to ever grace the screen. I can see what they mean because she is indeed incredible. Her feet move so fast while she is tap dancing, but, in a way, it looks easy. I must admit, when I see people tap dancing like this, it makes me want to do the same. Of course, Mrs. Powell was a professional! We only see her dancing twice in the film: when she does that unforgettable routine with her dog Buttons; and toward the end when she is the dancing star of a big musical number brilliantly staged by Busby Berkeley

When she is not dancing, Eleanor Powell develops her acting talent. She is a valuable supporting actress and adds a lot of pep and charisma to the film.

Virginie O’Brien as Lull and Red Skelton as ‘Red’ Willet make a funny couple. Lull always eats, but never gets fat and Red is honestly the funniest actor of the film.

Lionel Barrymore plays the judge. Even if it’s a small role, it was perfect for him and, so far, it’s my favourite performance of his. In a much more different role than Mr. Potter (It’s a Wonderful Life), Lionel plays a judge who tries to be serious, but who, inevitably, has a great sense of humour.

Finally, John Caroll plays a singer, Buddy Crawford. His presence is appreciated, but I can’t say it’s the most outstanding performance of the films. It’s a bit forgettable. However, we have to give him good credits for his beautiful deep singing voice.

We also have to mention the Berry Brothers (playing their own roles). They are incredible dancers and each one of their moves are extremely creative. Such a dynamic trio!

Apparently, Doris Day plays an extra in this film, but I couldn’t recognize her.

Lady Be Good is a film full of colours (despite being filmed in black and white!) that makes you want to sing, dance, and laugh. Of course, we can’t not talk about its music as it is a musical. In the story, the music is composed by Eddie and the lyrics are written by Dixie, but, in reality, George Gershwin composed the music and his brother, Ira Gershwin, wrote the lyrics. Now, you CAN’T go wrong with those twos. It’s not as glorious as “Rhapsody in Blue”, but it remains very pleasant to listen. However, some of the songs like “The Last Time I Saw Paris” (not composed by Gershwin), were composed before the film.

What I find interesting about Lady Be Good, is that the characters often talk about the Gershwins. They pay tribute to them in their own way.

This film is more about music than dance, but we some unforgettable choreographies were created by Busby Berkeley. Those are not as impressive as the ones in 42nd Street or Dames, but they remain a proof that Berkeley was the king of backstage musicals. At first, he was supposed to direct the film, but Norman Z. McLeod finally did the job. I think the following musical number is the best example of Berkeley’s creative genius for this film. As for the music, it’s a melody you all know.

I can’t leave you without talking about the costumes. Here, we explore the refine fashion of the 40’s. What I particularly like about Lady Be Good‘s costumes are Ann Sothern’s hats. Remember how Katharine Hepburn often wore very original hats in her films? Well, Ann Southern adds a new challenge to the fashion competition!

Ladies all wear very classy gowns in this film and it makes me regret to have been born in the 90s… The costumes were designed by Adrian. 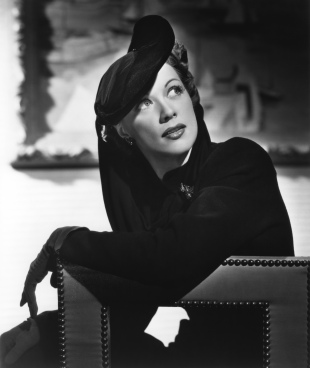 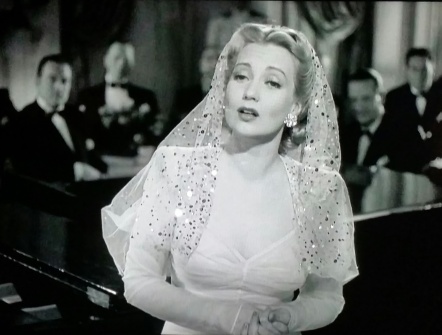 A big thank you to Movie Silently and Sister Celluloid for hosting this great event. It was a pleasure for me to explore an extremely amusing backstage musical.

I invite you to read the other entries. You’ll discover that backstage life is not always “happy” and “successful”…

18 thoughts on “Lady Be Good, a Backstage Musical”