Katharine Hepburn. The only thing that is not unique about her is this last name “Hepburn”. As for the rest, the lady was, and will always be one of a kind. Today, the one who was also called “The Great Kate” would have been 109. Unfortunately, Katharine left us in 2003 at the fair age of 96.
Even if she’s not with us anymore, that’s not a reason for us, her fans, not to honour her on this marvellous day. For the occasion, Margaret Perry is once again hosting The Great Katharine Hepburn Blogathon. Of course, it’s with joy that I’m participating to it again, as I had so much fun last year. You see, Katharine Hepburn is one of the most interesting subjects to talk about. For my contribution, I won’t write about a particular film of hers, but will simply honour her with a text explaining why she’s a favourite of mine.

At first, Katharine Hepburn is generally known for having won no less than four Oscars (Morning Glory, Guess Who’s Coming to Dinner?, The Lion in Winter and On Golden Pond), for her love affair with Howard Hughes (we are now all thinking about Scorsese’ The Aviator), for creating Hollywood’s most famous love story with Spencer Tracy (as well as starring in some movies with him), for her partnership with Cary Grant in four films and for often been under the direction of George Cuckor. But Katharine Hepburn, it’s much more than that. I can’t say I know a lot about her personal life, but what the lady simply transmits to us by her presence on screen is enough for us to have our attention kept and, if this one is (which will obviously be the case), to be more and more curious about her.
I perfectly remember when I first saw a photo of Katharine Hepburn. Like most of my favourite movie stars, it was in this book called “Les stars de cinéma”. I was looking at the pictures of all those marvellous stars that I was about to discover with my mother. I remember, when we arrived at Kate’s pages, my mother said “Oh yes, Katharine Hepburn is a great actress”. It’s funny, because my mother hadn’t really seen any of her movies except On Golden Pond, but this only proves us that Katharine Hepburn has a great reputation, even among those who don’t know her very well. Of course, my mother has seen more Katharine Hepburn’s films now, thanks to me, and I think she’s a favourite of hers too now! I was very happy when, after watching Women of the Year for the second time together, she told me: “Yes, I pretty like Katharine Hepburn! She’s a great actress” 🙂 Or well, something like that.
Before I saw any of her films, Katharine Hepburn was always presented to me as “The greatest actress ever”. So, of course, I had to discover her. If my memory is good, the first Katharine Hepburn’s film I ever saw was Holiday (George Cukor, 1938). Of course, it has the right ingredients to be a very representative Katharine Hepburn’s film: It was directed by George Cukor and her male co-star was Cary Grant. I’ve only seen this film twice. First time I watched it, I liked it, but I liked it better the second time (which was very recently). There is some stuff that I could understand better after a few years. However, the thing magical with Katharine is that, even if the film isn’t really good, she’s always there to save it. I recently watched Pat and Mike and honestly didn’t really like it. I don’t say that it’s not a good film, but I found it somehow boring. It just didn’t grab my attention. Luckily, the best thing about this film was her beloved Kate. I wonder what it would have been without her. She has such a presence!

This song is forever stuck in my head:

That “presence” stuff makes me think about why Katharine Hepburn is so admired. Everything she does on screen is so perfectly well-calculated, depending on her character, the story, the situation, etc. The way she talks, moves, look at the other character (I love the way she looks at Cary Grant in Bringing Up Baby), etc. is always neat. That voice! That unique voice! Some people could find it annoying, but it’s part of her personality, we can’t take it away from her. I must admit I’ve tried to imitate it, but no one can do it better than Kate herself. It’s a voice we’ll recognize everywhere. I can perfectly hear her saying “Oh but I can’t, I have a lease.” while I’m writing those words.
Yes, Katharine Hepburn certainly put all the energy she had in her on-screen performances. Thanks to her, her characters are so vivid, so present. She’s like a filter for the whole movie. She never hesitates. She’s such a great actress that it makes us wonder how she was in real life. Certainly a great lady! But what I mean here, is, how can you stop acting when you’re so talented? It simply seems addictive. Ok, I guess that’s why certain actors are called talented. It’s because they themselves can make the difference between a film and reality. I’m not an actress!

However, Katharine Hepburn doesn’t only amaze us by her acting. To satisfy us, the lady simply needs to “be”. Cary Grant once said “Everybody wants to be Cary Grant, even I want to be Cary Grant”. Well, Kate should have said that about herself too. Do I want to be Katharine Hepburn? DAMN YES! Even if Katharine Hepburn is my fifth favourite actress (but I consider her to be among the three most talented), she’s certainly one of those who inspire me the most. There’s so many things that Kate says in her films that I would like to say in everyday life. I must be frank with you, I’m impatiently waiting the occasion to say “Go on Baby, down the stairs!” Ok, I wonder when this will happen… I must admit that I often said to myself that I should try the “Susan Vance method” to grad a guy. 😉 Kate also makes me do weird things, but that’s part of the amusement: I’ve tried TWICE to do the egg trick from Woman of the Year (separate the white and the yellow with a strainer). I’ll tell you, IT DOESN’T WORK, but it’s really nice to do because you have the feeling you’re Kate (I’m so thankful that eggs exist). ❤ For a 15 second of glory, why not being Kate? 🙂

But, overall, Kate is the perfect strong woman model . She can be admired alright, not only for her acting abilities, but also for what she transmits to us. From what I know of Kate’s life, I think she was a very independent woman and somehow a feminist model. Some marvellous things she said certainly prove my point:
” I don’t regret anything I’ve ever done; As long as I enjoyed it at the time.”
“[on marriage] It’s bloody impractical. “To love, honor, and obey”. If it weren’t, you wouldn’t have to sign a contract.”
“I find a woman’s point of view much grander and finer than a man’s.”
“Only when a woman decides not to have children, can a woman live like a man. That’s what I’ve done.”
She certainly knew how to talk and how to be clear!
It was known that the lady was mostly wearing trousers, making her a revolutionary fashion icon. But, even in her movies she was one. How can we forget all those hats she wears in her films. Kate certainly was a hat’s head! As for the clothes, everything always seems to suit her perfectly, even rags. I think Katharine Hepburn was often wearing a red vest. Well, I have one myself, and, each time I  wear it (which is often), I think of Kate. 🙂 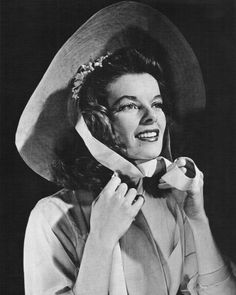 Anwyay, what the world would have been without Katharine Hepburn? What her co-stars would have been without her? Katharine Hepburn always seemed to have a perfect chemistry with the actors and actresses she was working with (young and old). Not always necessarily and  good off-screen chemistry, but certainly a good on-screen one. That was part of her professionalism. Kate made shining stars shine even more. She didn’t overshadowe them, she made them her equal (ok, I’m talking like James Stewart in The Philadelphia Story) in an unconscious way. She was a great and respectable lady from A to Z. She was a queen.

Before leaving you, I have to reveal a little top list of my 10 most favourite Katharine Hepburn’s films. What do you think? Otherwise it wouldn’t been  a worthy article for this blog. 😉
1- Bringing Up Baby (and my second favourite movie of all times)
2- The Philadelphia Story
3- The African Queen
4- Little Women (I just love this scene with Joan Bennett when she shows her how to faint!)
5- Woman of the Year
6- On Golden Pond
7- The Rainmaker
8- Suddenly, Last Summer
9- Guess Who’s Comming to Dinner
10- Holiday
The film itself is not on the list, but I have to give an honorable mention to The Lion in Winter, because that certainly was one of Kate’s greatest performances.
I also invite you to watch my video tribute to her.
https://www.youtube.com/watch?v=fCH5oDj8BWI
Since last Thursday, I watched a bunch of Katharine Hepburn’s films (some I had never seen, some I already saw). Of course, I’m going to watch more today. I will cook her famous brownies as well and read the other contributions for the blogathon. What a grant Kate’s day it will be!

I, of course, want to thank Margaret for organizing this great event again. You can read the contributions here:
The Great Katharine Hepburn Blogathon.
I’ll leave you with this quote by Katharine Hepburn that is a favourite of mine, because it makes me think so much of me. I love Kate’s mentality!
“If you always do what interests you, at least one person is pleased.”
Happy heavenly birthday beautiful Kate! ❤

8 thoughts on “Remembering the Great Kate”