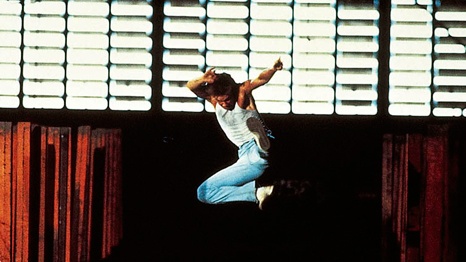 When Bonnie from Classic Reel Girl announced that she was hosting the Gotta Dance! Blogathon, celebrating dance in the world of cinema, I, of course, had to participate to this highly appealing event. You see, apart from my passion from classic films, I also have a passion for dance. I love watching dance television shows, dancing myself (I did two years of dance when I was in CEGEP). When there’s music around, I can’t help swinging. And, of course, I love dance movies because they are the perfect combination of my two passions.
In this field, when I think of a movie that makes me want to dance, the first one that comes to my mind is Footloose (Herbert Ross, 1984) Of course, the 80s were a great decade for dance movies with movies such as the one previously named, Flashdance or Dirty Dancing. Of course, dance in films already existed with the Fred Astaire and Gene Kelly of this world, but here I’m mentioning films were the only performing art is dance (not dance and singing). They are movies who really celebrate dance, movies about about dance. It’s the central subject. 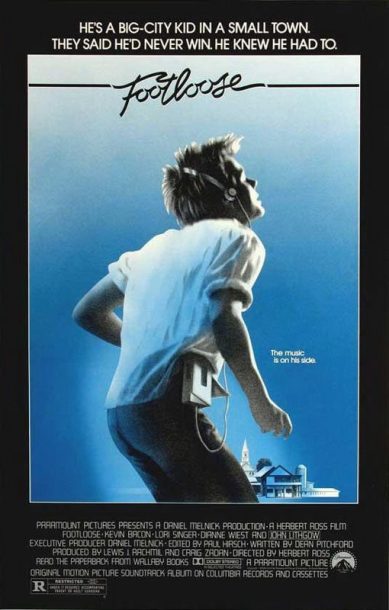 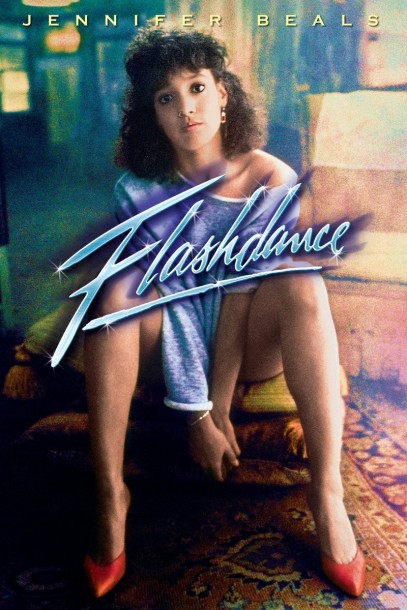 Footloose takes place in the boring little town of Beaumont. Ren McCormack (Kevin Bacon) and his mother Ethel (Frances Lee McCain) have left Chicago to come live in the city with Ren’s aunt and uncle. The problem in this city is that dance and rock & roll music have been forbidden by city reverend, Shaw Moore (John Lithgow), after a fatal road accident. That’s a problem for Ren as dance is his passion. He makes new friends, including Willard Hewitt (Chris Penn) and Rusty (Sarah Jessica Parker) and falls for the reverend’s daughter, Ariel (Lori Singer). Ren has to compete against her boyfriend Chuck (Jim Youngs). Things don’t start too well for Ren as he always seems to get himself into troubles. However, his only objective will be, with the help of his new friends, to bring back the art of dance in the city.

Footloose story was based on a real life event that happened in the very religious town of Elmore City, Oklahoma in 1978. Dance was forbidden for 90 years and a group of teenagers decided to challenge this. (IMDB) 90 years! Imagine the nightmare.

I don’t know where I first heard about this film, but one thing is sure, it’s the kind of film everybody knows the existence of. I was curious to know what kind of film it was. So, I watched the trailer and was amazed. Those dance moves, this music; all this was everything I needed to be entertained. So, I immediately borrow the film at the video club and it turned out to absolutely be my kind of film. I later bought the dvd and watched it over and over.
Footloose is  the perfect representation of the dance style at the time, which was much more cool than today’s one.
The film starts in a perfect way with the opening credits where we see different pair of feet doing dance moves, some being quite imaginative and creative. Our attention is immediately grabbed with this scene and we feel like getting up and dancing too. However, we have to sit down to watch the rest of the film.
https://www.youtube.com/watch?v=CSWlpZSdu4E
Of course, this is not the only moment that makes us want to get up and dance. My favourite dance scene is the one when Ren dances in a warehouse. Things aren’t going very well for him and that’s his way to externalize his anger. We can easily say that it’s the most impressive scene of the film with some amazing dance moves and stunts. Kevin Bacon could dance, however, for this scene, he had four stunt doubles for the more difficult tricks.
https://www.youtube.com/watch?v=e0rmSkHzoi0
A very amusing dance scene is the one when Ren teaches to Willard how to dance. Of course, we laugh a lot while watching this scene, but, just like Ren, we are really impressed by Willard’s improvement. The interesting thing about this scene is that Chris Penn really couldn’t dance so he had to be taught on the set. This scene was added precisely because of that. Mixing fiction and reality can sometimes be worthy.
https://www.youtube.com/watch?v=Z5N-_pO6zAE
We don’t only remember Footloose for its dance, but also for its music. How can we forget the theme song “Footloose” sung by Kenny Loggins or “Let’s Hear for the Boy” sung by Deniece William (both nominated for an Oscar), or “Holding out for a Hero” sung by Bonny Tyler??? If you like 80’s entertaining music, Footloose‘s soundtrack certainly is a must to your musical library.
https://www.youtube.com/watch?v=Fn7d_a0pmio
Footloose‘s main objective is to celebrate dance, how this one can cheer us and feed us. Just like Ren wants to prove it to the people of Beaumont, dance is not a synonym of debauchery and danger. Dance, after all, remains an art.
So, has David Bowie said “Put your red shoes and dance the blues”!
A big thanks to Bonnie for hosting such a nice blogathon. I invite you to read the other entries as well:
Gotta Dance! Blogathon
And a happy National Tap Dance Day to all! 🙂 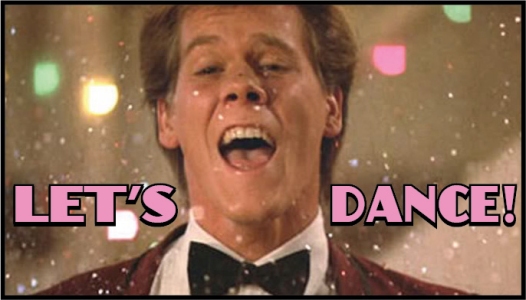 7 thoughts on “Put your Dance Shoes and Watch “Footloose”!”