Last January 16 marked the 75th anniversary of Carole Lombard’s passing. This luminous actress tragically lost her life at the young age of 33 in a plane crash. To honour her memory, my friends Crystal from In the Good Old Days of Classic Hollywood and Laura from Phyllis Loves Classic Movies are hosting the Carole Lombard: The Profane Angel Blogathon. The event started on January 16 and is coming at its end today. I still haven’t seen a bunch of Carole Lombard’s films (six, I think), but just to see one was enough for me to appreciate her. So, I obviously couldn’t miss the occasion. My choice for the blogathon is My Man Godfrey, a 1936 screwball directed by Gregory LaCava and also starring William Powell (Carole Lombard’s first husband before Clark Gable). Carole Lombard received her first and, unfortunately, only Oscar nomination for her dynamic performance in this picture. It was also nominated for Best Director (LaCava), Best Actor (Powell), Best Supporting Actor (Mischa Auer), Best Supporting Actress (Alice Brady) and Best Screenplay (Eric Hatch and Morrie Ryskind). Interestingly, My Man Godfrey was the first film to be nominated in all the four acting categories (Wikipedia). I personally think all the cast deserved a nomination!

My Man Godfrey presents a clash of societies during the Great Depression. It all starts when Irene (Lombard) and her sister Cornelia (Gail Patrick) Bullock detrain in a dump to find a “forgotten man” for a scavenger hunt. Cornelia sees one, Godfrey (Powell) and offers him 5$ to be her “forgotten man”. Annoyed by the idea, he asks her to leave. While he advances towards her, she falls in a pile of ashes. She leaves, bitter and angry. Irene, who is a much likeable character, stays, and Godfrey suggests to be her forgotten man to beat Cornelia at the contest. After Irene’s team win thanks to Godfrey and after he meets her family, she gives him their address as they need a new butler. So, the next morning, Godfrey arrives at their place to be hired for the job. He soon realizes that the Bullock is far from being an ordinary family (except maybe for the father played by Eugene Pallette), but he turns out to have a pretty good endurance. He, however, has to face Cornelia’s shenanigans against him and soon realizes that Irene is deeply in love with him an who had decided to make him her “protégé”.

There are so many things happening in My Man Godfrey. The moments of calm are rare, so, if you haven’t seen it, I can assure you, you won’t be bored.

It’s not without any reason that I personally like to call Carole Lombard “the queen of comedy” and My Man Godfrey is the proof that she was. I mean, she could play drama well too, but I believe she would mostly be remembered for her perfect comic timing. She and William Powell weren’t married anymore at the time they made the movie together (they divorced in 1933), but interestingly, it’s William Powell that suggested Carole for the part. IMDB informs us that it’s because their real life relationship was similar to Irene and Godfrey’s one. Miriam Hopkins and Constance Bennett were among the choices for the part of Irene, but to Powell’s eyes, Carole was the perfect one for the part. And he was right! She’s hilarious from the beginning until the end.

What I’ve always liked about Carole Lombard is the when you see pictures of her, “staged pictures”, she can look very serious and dramatic, but when you see My Man Godfrey or Nothing Sacred, you realize that you have been fooled and that she is, in reality, a real clown. Although, she doesn’t look like a clown, but like a very distinguished lady, who could play comedy. 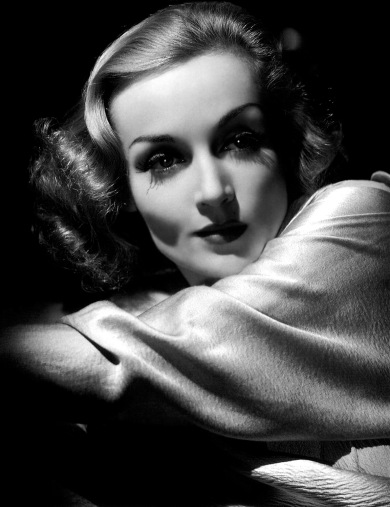 In My Man Godfrey, Carole Lombard is… motivating. Seriously, I couldn’t pick a better world. Her energy is contagious and makes you want to be like her, even if she’s a little crazy. As we would say in French “elle fait la comédie” (“she plays the comedy”) and becomes tragic to fool people around her or to show her deception about something. But, as we know, she’s kind of faking it, so it remains hilarious. Irene Bullock makes me think a little of Susan Vance (Katharine Hepburn) in Bringing Up Baby, a lady who will never be ready to give up her man hunt!

Carole makes a good team work with her fellow actors. Her chemistry with Powell is unbelievable and that might be one of the best things about the film. Her opposition with Cornelia (Gail Patrick) is perfect. They are like real sisters if you see what I mean. 😉 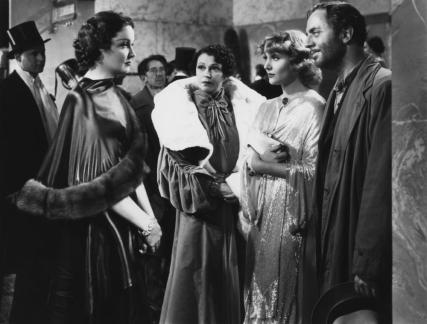 Something I also like about Carole Lombard is the fact that she has some of the best lines. I think that along with Network’s ” I am mad as hell and I am not going to take it anymore”, “Godfrey loves me! He put me in the shower!” is my favourite movie line. It doesn’t make much sense, plus Carole’s facial expression when she says it is priceless. So, it remains a pretty hilarious moment.

Here are some other Carol Lombard’s quotes from My Man Godfrey that are quite memorable and reflects quite well the atmosphere of the film:

1- Godfrey: Do you think you could follow an intelligent conversation for a minute?

2- Irene: You have a wonderful sense of humor. I wish I had a sense of humor, but I can never think of the right thing to say until everybody’s gone home.

3- Godfrey: These flowers just came for you, miss. Where shall I put them?

Irene: What difference does it make where one puts flowers when one’s heart is breaking?

Godfrey: Yes, miss. Shall I put them on the piano?

As we were honouring Carole Lombard in this blogathon, I mostly decided to focus on her for my article, but, of course, there will be many other things to discuss. I’ll leave you with that fun movie bloopers video for your own entertainment. Enjoy! 🙂

A big thanks to Laura and Crystal for hosting this event! You can read the other entries by click on this picture: 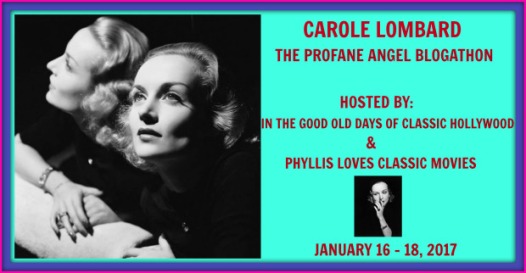 Carole Lombard left us too soon, but she’ll be in our hearts forever ❤ RIP beautiful angel.