Something special is happening at Hometowns to Hollywood as Annette is hosting a blogathon for the very first time! The classic film enthusiast has chosen to honour the world of musicals with an event dedicated to the golden age of Hollywood choreographer Busby Berkeley. For those like me who like the musical genre, Berkeley is an essential. His choreographies had something that was proper to him and didn’t only allowed the dancers to prove their skills, but for some, became real pieces of art. The kaleidoscopic spectacle was to be his trademark and made him a real magician. 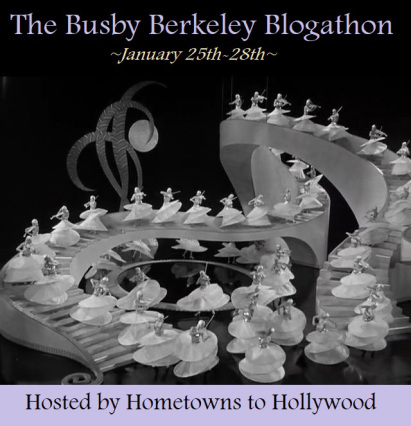 For my participation in the Busby Berkeley Blogathon, I’ve decided to discuss my favourite musical numbers directed by him. Five films would be explored: 42nd Street, Gold Diggers of 1933, Footlight Parade, Dames and Lady Be Good. Of course, Berkeley worked on many more films, including the well-known family classic The Wizard of Oz.

42nd Street is the first film choreographed by Busby Berkeley that I saw. I was not much older than 15 or 16 years old and, to be honest, didn’t really love it. I just found it ok. Then, I watched it a second-time years later (actually, I think it was last year) and simply adored it. It’s amazing how our tastes can change. Despite not being so impressed by it on my first viewing, the final musical number always had a place among my very favourite movie scenes. I remember watching it often on YouTube and trying to learn the song by heart. But it’s only when I was in Cegep that I really heard of Busby Berkeley or, more precisely, that I learned that this musical number that I loved so much was choreographed by him. In one of my film history classes, my teacher discussed musical films and introduced the class by teaching us about backstage musicals, those films telling the story of a Broadway show. Busby Berkeley was an essential figure in backstage musicals.

But let’s now explore two musical numbers of this film in greater details:

Shuffle Off to Buffalo

Shuffle Off to Buffalo starts in a quiet way with Ruby Keeler and Clarence Nordstrom playing a newly wed couple. They are on the boat, on their way to Buffalo. The boat suddenly becomes a train and the visual effect impresses us as well as the applauding public in the movie. The other train passengers participate in the number with their chorus voices while Rudy and Clarence execute some jolly tap dancing. The melody of the voices and the rhythm of the steps are in perfect harmony for this sympathetic musical number. My favourite part of the scene really is the singing duo between Una Merkel and Ginger Rogers who don’t seem to believe much in marriage. According to them “Matrimony is baloney”!

The final choreographic number starts with Ruby Keeler singing about the famous street and its people. She then proves us her potential as a good tap dancer. The camera moves and reveals us that she is in fact, dancing on the roof of a car! The car goes away with Ruby and reveals us a complex stage that has been transformed in New-York City with its cars, numerous people, scandals, and lights. We realize that, although it is supposed to happen on a stage, cinema and cameras allow a better potential for such an impressive scene. Some parts of this scene don’t contain any visible cut and make us wonder how it is possible. It really gives us the illusion that it was filmed in a gigantic studio. Dick Powell eventually introduces himself to the song while my favourite extra is mixing a drink in the background. The other dancers, dressed like Ruby arrived to close the numbers and their lively silhouettes become enlightened buildings in the New-Yorkian night. I love the singing voices at the end of this musical number! 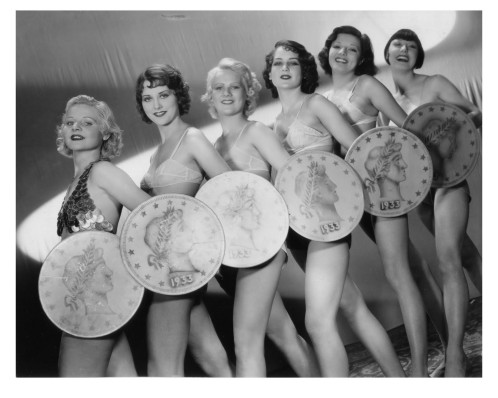 The first time I heard about this film was when I saw Bonnie & Clyde. Remember, there’s this scene where the two dangerous lovers and their comrade C.W. Moss go hide into a theatre after Clyde has killed a man? The movie playing precisely is Gold Diggers of 1933 and we’re at the beginning of it with its introducing number, “We’re in the Money”. At the time, I had no idea this film would eventually become a favourite.

We’re in the Money

Ok, if I become rich one day, I want to re-enact this scene, covered with coins just like Fay Fortune (Ginger Rogers). This musical scene is an interesting way to begin the movie as it makes a contrast with the real-life situation of 1933: the economic crisis. Yes, Americans were far from being “in the money” and this musical number, therefore, becomes an ideology, the expression of their desire to come out of this difficult situation. The practice is indeed abruptly interrupted by the creditors and producers of telling people to stop the show as they haven’t got enough money to finance it. There’s a lot of joy in this dance and the whole thing is embellished with big coins forming interesting fans. I once gave myself the challenge of learning this song by heart, which I succeed, except for the pig latin part!

Pettin’ in the Park

You like pre-code? Well, here is some pre-code for you. “Pettin’ in the Park”, even if it seems innocent at first, is one of the most daring musical numbers of Berkeley’s filmography. It starts with a naughty Dick Powell and a shy Ruby Keeler singing about “pettin in a park” and “pettin in the dark”. They are soon joined by other dancers and the stage becomes a real snowy scene with skating and amusing snowball fights. Busby Berkeley films the dancer with their false giant snowballs with his usual high angle shots which shows us kaleidoscopic forms. Then it’s Spring and the ladies and their beaux are sitting together. A little boy (played by dwarf Billy Party) sneaks into their intimacy and when the girls go hide behind a curtain to change their wet clothes, he starts to pull this curtain! ;). This is a complex scene so there’ll be much more to say. I’ll let you watch see for yourself. Unfortunately, I could only find it in three separated parts.

Joan Blondell is the star of this closing number. In opposition to the optimistic opening number, Forgotten Man takes us back to the reality of the economic crisis and men leaving their houses to fight for their country during the first World War. For this impressive scene, Busby Berkeley used a German Expressionist aesthetic playing with shadows and contrast. The end of the scene indeed offers us some impressive views on the silhouettes of the marching soldiers. 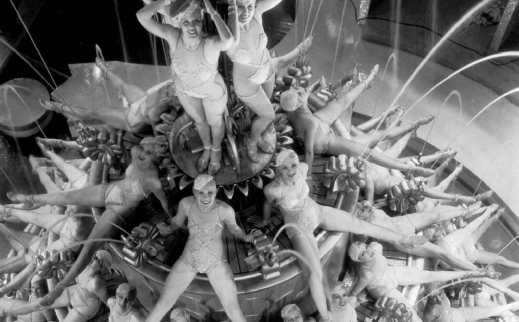 Footlight Parade is a good movie allowing us to witness James Cagney’s talent as a dancer. However, I must admit that this film doesn’t contain most of my favourite musical numbers, but I think one is worthy of mention:

This complex choreography is a bit long but remains a great entertainment for our eyes. The particularity of “By a Waterfall” is that it was filmed on the water with graceful swimmers. No, Esther Williams didn’t do it first! Berkeley offers us a poetic vision of the aquatic life with swimmers drawing beautiful abstract patterns on the water and even a giant human waterfall!

Apart from being a deliciously funny movie, Dames might contain some of my most favourite musical numbers created by Busby Berkeley. The film was first introduced to us when my Film Aesthetic  teacher showed us some clips. I was amazed by the way it was filmed and so were the other students we couldn’t help applaud at the end of them (this is not something you witness often in university classes). Of course, it immediately made me want to see the film.

I Only Have Eyes for You

Here, you’ll see plenty of Ruby Keeler. She is literally everywhere in this scene as if she was an idolized goddess. The scene contains some magical effects made on a black background and takes us from one shot to another with an incredible fluidity and ways that no one could possibly imagine.

The impressive part of this scene starts with these ladies’ morning routine. They are revealed to us behind large clocks and start their day, smiling and fresh. Honestly, I never had a smile like that on my face while waking-up in the morning. Kudos to them. They then go to work and enter by the stage doors. Then starts the Berkeley touch with a pretty choreography on a white background making a contrast with their black leggings. Of course, high angles and kaleidoscopic effects aren’t missing.  The final moments are amazingly impressive and were probably the reasons why my classmates applauded after the viewing of this clip. But honestly, it’s too wonderful for words. I’ll let you watch it.

I couldn’t find the entire clip, but here is the best part anyway!

Lady Be Good isn’t Berkeley’s most well-known work but it’s one that deserves to be explored. The film starring Ann Sothern, Robert Young, Eleanor Powell and Red Skelton gives a new approach to the filmography of Berkeley. Here, the musical numbers find a certain simplicity that is in opposition to the ones from the pre-code era but don’t lack dynamism. Far from it!

Here, the notorious trio formed by the Berry Brothers sing a song composed by Ann Sothern’s character while executing a breathtaking choreography in their chic clothes. They aren’t only dancers, they are amazing acrobats as well! This classy musical number is the proof that Berkeley was able to show us different things than kaleidoscopic effects to take our breath away.

If there was a queen of tap dance, Eleanor Powell maybe was the one. Anyway, we agree that she surpasses Ruby Keeler’s level. In this scene, her character “only” do a dance practice. But what a practice! Here she wears what seems to be the most comfortable pants ever and start with lively and fast steps. She simply dances like a fish swims, with incredible gracefulness. The amusing part of the scene occurs when she is joined by her dog Button who turns out to be quite an appreciated dance partner! Ellie’s smile seems to be an invitation to dance with her!

Lady Be Good‘s last musical scene is the most complex one and, somehow, takes us back to the age of Gold Diggers and 42nd Street. Just like with “Forgotten Man”, Busby Berkeley plays with the shadows, this time the ones of the band musicians and the Berry Brothers. Connie Russell starts singing the song and is soon joined by the three dancing brothers and their usual dynamism. Eleanor Powell eventually makes her entrance dancing among pianos and accompanied by a ground of gentlemen who only make her shine.

Unfortunately, I wasn’t able to find the beginning of the scene with Connie Russell singing. But you can still watch the Berry Brothers and Eleanor Powell’s dancing!

Of course, much more of Busby Berkeley’s work deserves to be explored, but I hope this post gave you a good preview of his work and my own personal tastes!

Many thanks again to Annette for hosting this fun blogathon!

Don’t miss the other entries: