The Barrymores were to Hollywood what the Redgraves were to England: A “royal” family of talented actors, expended on more than one generation. My friend Crystal is one of the Barrymore’s great admirers and she reminds it to us every year with her always expected Barrymore Trilogy Blogathon that she hosts on her blog In The Good Old Days of Classic Hollywood. This is already the fourth edition and I’ve participated to all of them. The first year, I wrote an article on Ever After starring Drew Barrymore. The second year, I reviewed the spellbinding Portrait of Jennie starring Ethel Barrymore. Last year, it was Dinner At Eight which stars both John and Lionel Barrymore. This year, I’m back to the lady, Ethel, with my review of The Spiral Staircase, a spooky psychological  thriller also with Dorothy McGuire, George Brent, Kent Smith, Gordon Oliver, Rhonda Flemming, Elsa Lanchester, Sara Allgood, Rhys Williams and James Bell. The 1945 film was directed by Robert Siodmak and I think is among his very best work. I have to thank Crystal who actually made me discover this film. You see, it’s her all time favourite. So, one of these days, I decided to watch it for this very reason and I was not disappointed. Far from it! 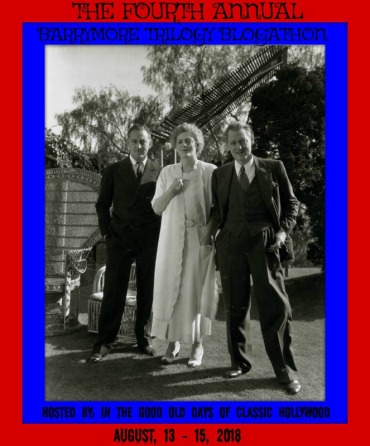 The Spiral Staircase takes place in Vermont during the early 20th century. Helen (Dorothy McGuire), a mute girl is attending a screening in the parlor of an inn. During the projection, a resident of the inn, a crippled woman, is murdered in her room. But this is not the first murder taking place in this small village of New England. It’s actually the third one. The victims all have two things in common: 1- they are women, 2- they suffer from a physical or psychological handicap. Helen, who is mute do a traumatism, might be in danger. Helen works as a live-in companion for Mrs. Warren (Ethel Barrymore) who lives in a large mansion with her two sons, Albert (George Brent) and Steven (Gordon Oliver), and with their few domestics: Mrs. Oates (Elsa Lanchester), a housekeeper, Mr. Oates, the handyman; Blanche (Rhonda Flemming), the secretary (and Steven’s love interest) and  Nurse Baker (Sara Allgood) whom Mrs. Warren simply detest.

After the projection, Helen’s friend (and love interest), Dr. Parry (Kent Smith), drives her home to make sure she is safe. On their way, they meet a little boy who begs the doctor to come and see his father who is sick. Dr. Parry hesitates, but Helen reassures him that she’ll be alright. She manages to enter home safe and sound. But even under a roof, Helen might not be able to avoid the unknown murderer. And why does Mrs. Warren insists on her to go away? I’ll let you see the film to solve the mystery. 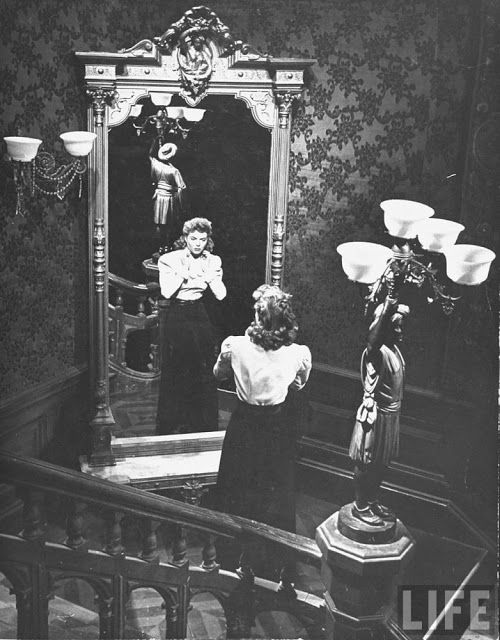 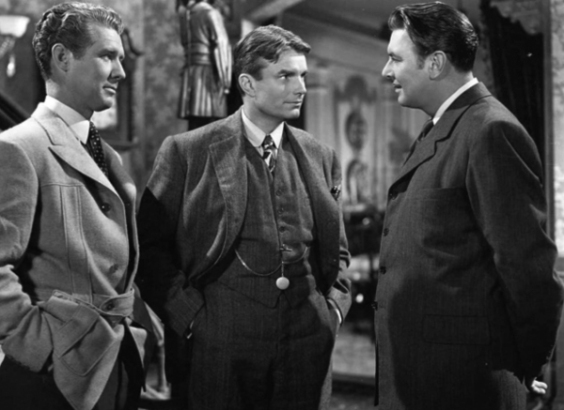 The things that always amazed me about Ethel Barrymore’s performance in this film is how creates such a strong aura around her and manage to give an incredible strength of character to her role for a part who was mostly entirely spent in bed. Mrs. Warren is someone who knows everything about everything without even living her bed (she is sick that’s why she stays in bed all day- not because she is lazy like me). She is the center of attention when present and could be compared to a majestic queen. I  haven’t seen many Ethel Barrymore movies, but from what I saw, I rarely saw her play weak people or damsel in distress. Ethel’s chemistry with Dorothy McGuire is a beautiful one and we appreciate the touch of humour there is between the two despite the tense atmosphere. The contrast between the two characters, the sweet and gentle Helen, and the daring Mrs. Warren is also what makes this movie so good. Ethel totally owns this film. When she starred in The Spiral Staircase, she had been in the movie industry (and theatre) for long and you can see she was comfortable playing roles on screen. She was born to be an actress. And I wonder how it was for Dorothy McGuire (The Spiral Staircase being only her fifth movie) to work with her. I feel she was this kind of woman who was impressive but great, from whom you could learn a lot. Maybe Crystal could confirm!

But Dorothy McGuire deserves good credits too. As I said before, her role is very different from Ethel’s one but she is as mesmerizing. Ethel’s challenge was to appear as a mentally strong person (despite lying in bed all day). McGuire’s challenge was to play the role of a mute girl. Not talking isn’t that easy! You need to find a way to deliver your emotions without words but without exaggerating the facial expressions too much either, the silent film acting style being long gone. In some scenes, she truly breaks our hearts. 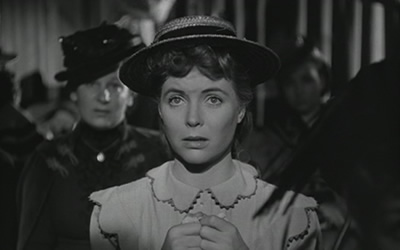 Ethel Barrymore received a highly deserved Oscar Nomination for Best Supporting Actress for her unforgettable performance in this film. I think Dorothy McGuire should have received one as well. She was an underrated actress.

The rest of the cast is great as well, but I don’t think they shine as much as Ethel and Dorothy. Except maybe Elsa Lanchester who always is such a delight and was among the great character actresses. I love her as well in this film as the eccentric housekeeper. She is fun and plays the role of a maid like no other. 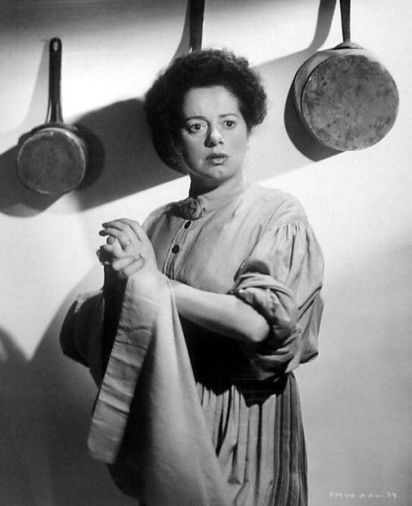 Apart from the performances, The Spiral Staircase remains worth watching for its noirish and gothic film composition. After all, it was a Robert Siodmak film. And he knew how to create strong images. Nicholas Musuraca was the cinematographer for this film. The film visually explores different contrasts as well as haunting and mysterious images. We can think, for example, of this extreme close-up of the murder’s eye each time a murder is about to be committed. Interesting facts: the hands and the eyes of the murderer were actually those of Robert Siodmak himself. The visual style also has an important role to play in the psychology of the characters. We can think, for example, of this scene where Helen visualizes herself marrying Dr. Parry but she isn’t able to say “I do” due to her inability to speak. The dark visual atmosphere in this scene reflects her feeling of weakness and despair. Due to strong key lights, the characters observing her seem very menacing. The Spiral Staircase is, after all, a psychological thriller and Siodmak knew perfectly how to team the narratives and visual aspects to make us feel the complexity of this psychology. 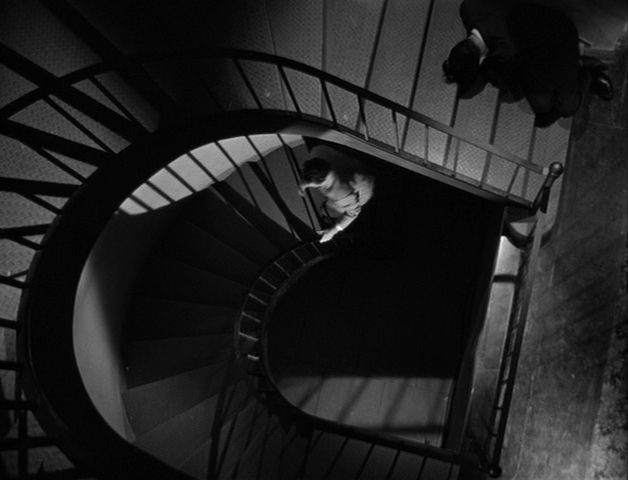 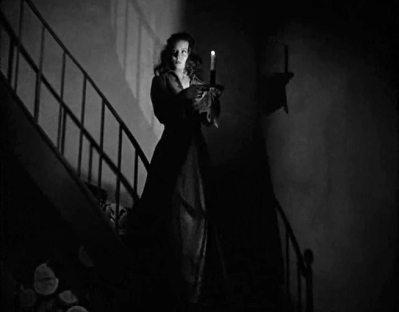 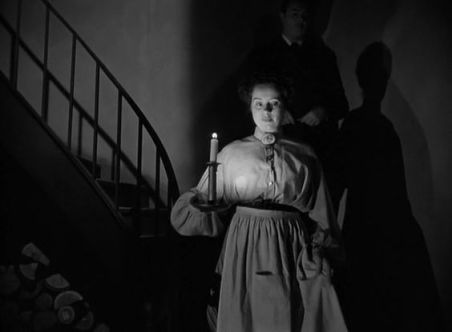 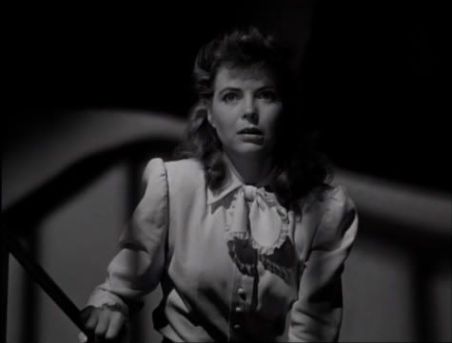 The Spiral Staircase is a movie that keeps you at the edge of your seat for its intriguing story and the impeccable acting and mesmerizes you for its visual composition. If you haven’t seen it, I strongly recommend you to do so as soon as possible.

A huge thanks to Crystal for hosting this blogathon! And yes, I was late but better late than never! 😉

5 thoughts on “The Haunting Spiral Staircase”