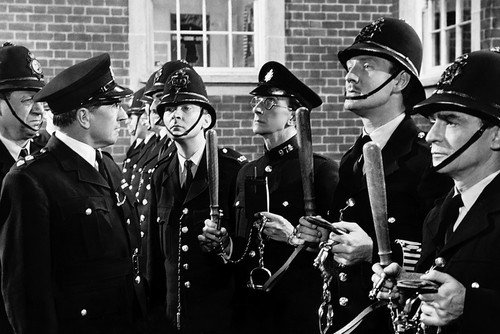 I can’t believe I’ve already reviewed three of the Carry On films! And here we go for a fourth one: Carry On Constable (1960)! I know, it’s just four out of 31, but I feel that is looking more and more like a blogging series, no? By the way, I just went to the library and borrowed two books on Carry On films! Yes, it exists! Those are The Carry On Companion written by Robert Ross and What a Carry On: The Official Story of the Carry On Film Series by Sally Hibbin and Nina Hibbin. Hopefully, they would be great additions to the development of this blog series.

Carry On Constable marks an important step into the series as it was the first film to introduce Sidney “Sid” James, who became one of the iconic faces of the franchise. However, Kenneth Williams is the one who appeared in the largest number of Carry On films with a total of 25, while Sid James appeared in 19 of them. Sadly, James passed away in 1976 at the age of 62 when he was the victim of a heart attack. (1) He was incrusted into the series as a replacement of Ted Ray who was supposed to appear in more Carry On films after Carry On Teacher‘s released but, unfortunately (well, depends how you see that), had to withdraw due to contractual reasons (2). Sid James was then to play the rational figure opposing the craziness of Williams, Sims, Connor, and Hawtrey. But wouldn’t have we liked to see both of them in the Carry On films? James and Ray, I mean. Sid James’s last appearance was in Carry On Dick in 1974. 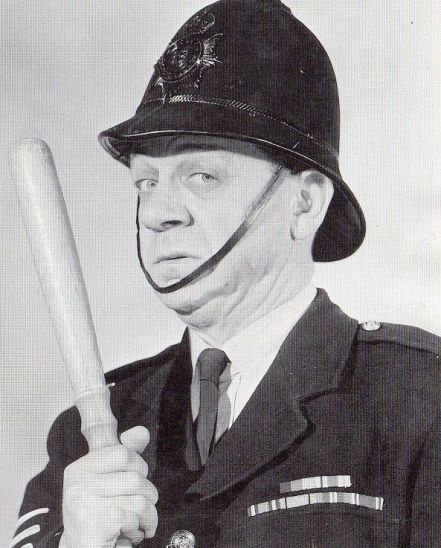 In Carry On Constable, Sid James plays Sergeant Frank Wilkins. Due to a flu epidemic, there’s a lack of employees at the police station where he’s working. Luckily, three new recruitees are about to arrive to complete the missing staff: Constable Stanley Benson (Kenneth Williams), an amateur psychologist; Constable Tom Potter (Leslie Phillips), a playboy, and Constable Charlie… Constable! (Kenneth Connor), a highly superstitious man. At the station, Special Constable Timothy Gorse (Charles Hawtrey) will complete the team. Sgt. Wilkins has to count on his new men for good work as he is under the pressure of his superior, Inspector Mills (Eric Barker), who notices Wilkins’s lack of capacities more than anything. Wilkins expects his new men to prove Mills wrong and avoid him to be transferred to another station. But, as you can expect from a Carry On film, that won’t be easy, and the companions will be led in zany adventures from the start. Luckily, Sgt. Laura Moon (Hattie Jacques) is here to support him and also becomes a helping hand for Constable Constable who is very much interested in Constable Gloria Passworthy (Joan Sims). 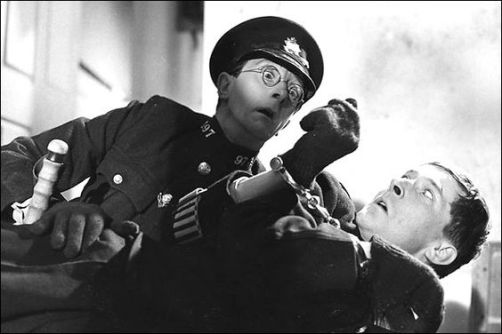 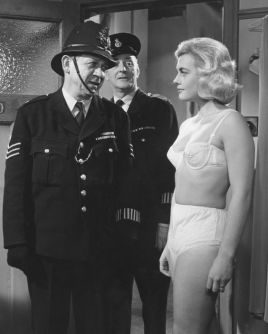 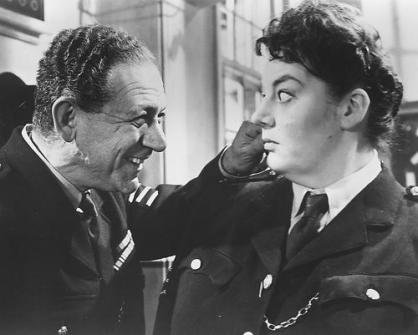 With such a storyline, you’ll agree with me that it’s easy to compare Carry On Constable to Carry On Sergeant. Indeed, as it is indicated on the website BFI Screen Online, both films make fun of the authority. Both team leaders hope on their team capacities to make a good impression. Despite the hard work to accomplish this, they aren’t vile authorities and are fair to their men despite the ridiculous situations in which they are involved. (3)

I have to say; I love the way the three new constables are introduced to the story: Kenneth Williams, Kenneth Connor, and Leslie Phillips. We see them walking on the street en route for the police station; all dressed in their constable uniforms. First of all, they look adorable and, second, it just feels great to see these faces again. Doesn’t it? Constable Potter wears a tennis racket under his arm which gives us the impression he is a constable who likes to have a bit of fun once in a while. Constable Benson has this theory that he can guess if someone is a criminal or not just by looking at his/her face (he’s always wrong). On his side, Constable Charlie Constable doesn’t only ridicule himself with his name but also with his superstitious nature which leads him to many embarrassing situations and awkward moments with his love interest played by Joan Sims. Sgt. Passworthy (Sims) is also fairly new to the station and desires to make her proofs with seriousness and devotion to her work. She indeed manages to do so but, despite her responsible behaviour, she is eventually warmed up by Constable’s attraction to her.  However, she never loses her dignity. 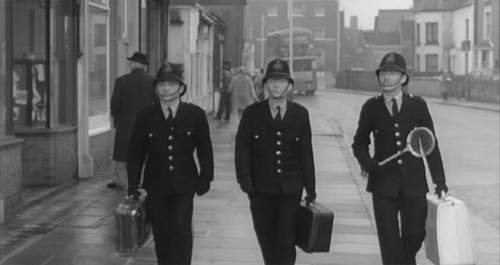 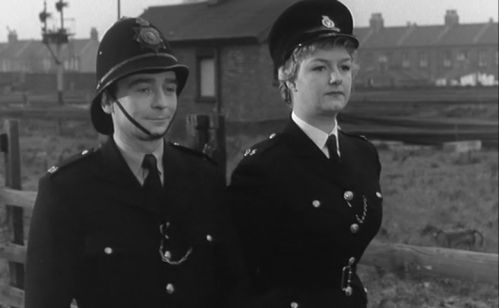 Note: Although this was James’s first Carry On film, sadly, it also marked the last appearance of Leslie Phillips in a Carry On film for a very long time. He appeared years later in Carry On Columbus (1991) as the king of Spain. His presence surely will be missed! 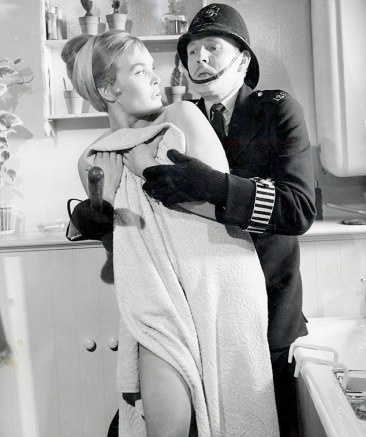 Carry On Constable had the particularity of being the first film of the franchise to show some nudity. Well, bare butts remain innocent enough. It happens when the four “young” men are taking their shower in the morning and are surprised by very hot water. They run out of the showers barely covering themselves with their towels at the great scandal of Mrs May (Joan Hickson)– a regular to the station due to drunkness. Constable Passworthy arrives at that moment and acts as if it was perfectly normal, which makes the scene even funnier. 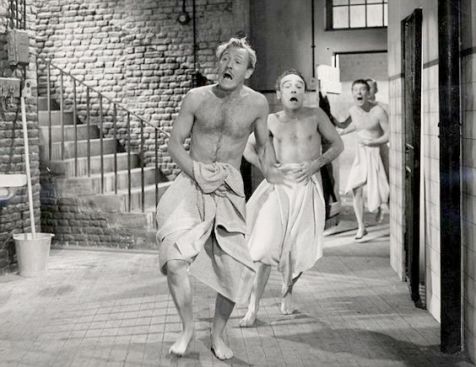 Carry On Constable goes from joke such as Kenneth Connor mistaking a radio show for a crime to Charles Hawtrey amusing himself with a scooter, passing by Leslie Phillips being spontaneously kissed by one of his many loving conquests while on duty, and by Kenneth Williams being convinced that a man is a criminal when he is, in fact, a detective. However, my favourite scenes may be the following ones:

Special Constable Gorse (Hawtrey) makes his most expressive entrance with flowers under one arm and a birdcage under the other. Well, one expects Hawtrey to make a remarkable entrance in a Carry On film! 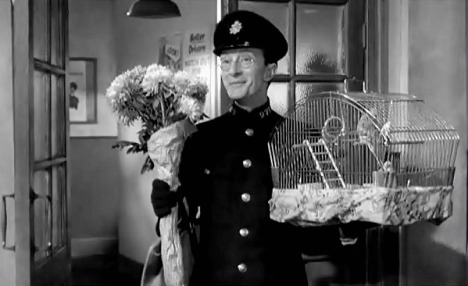 Sgt. Wilkins then introduces him to the new employees. I love that part:

Gorse: How do you do?

Gorse: How do you do?

All together (except Wilkins): Hello, Bobby.

The faces Kenneth Connor makes when Sid James calls him “Him” instead of “Constable Constable” is just priceless.

Otherwise, I love the part where Kenneth Williams and Charles Hawtrey are in this department store to spot thieves. To pass incognito, they disguise themself as Ethel and Agatha!

Benson: Are you rrready Agatha?!

Gorse: If you are, Ethel!

A few moments later as they are walking in the store:

Benson: Do you have to keep your glasses on?

For the reasons we’ve enumerated and more, Carry On Constable remains an important one in the series. If you’re in for something not too serious (far from it), a ton of memorable gags, and the best of British comedians, then Gerald Thomas (director), Peter Rogers (producer), and Norman Hudis (writer) have created something perfect for you! 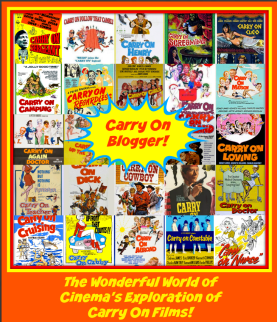