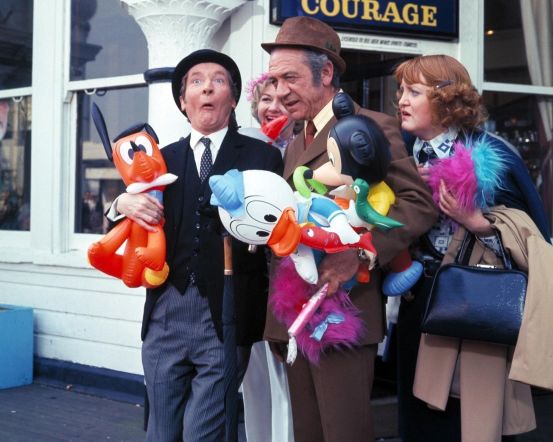 Carry On at Your Convenience revolves around toilet manufacturing. The story, more precisely, takes place at W.C. Boggs & Son, Kenneth Williams playing Boggs and Richard O’Callaghan playing Lewis, the son. One of the manufacturers, Vic Spanner (Kenneth Cope) is the union representative and constantly puts the factory into trouble by regularly organizing strikes. His only true supporter is Bernie Hulke, played by Bernard Bresslaw. Spanner is also in competition with Lewis as they are both interested in one of the employers, Myrtle Plummer (Jacki Piper). Myrtle is the daughter of Sid Plummer (Sid James), the site foreman of W.C Boggs & Son. Plummer doesn’t appreciate Lewis as he belongs to the upper class. Aside from that, Lewis and toilet designer Charles Coote (Charles Hawtrey) try to convince Mr Boggs that bidets would be a great addition to his company. 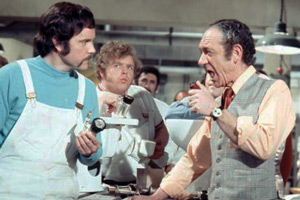 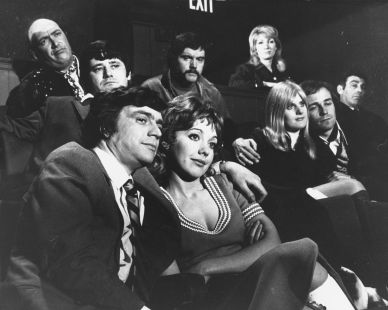 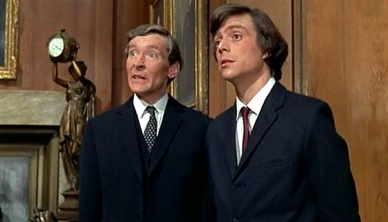 The story, even if it has its main theme, goes in a lot of directions and establish many relevant connections between the characters. So, it’s hard to sum it up perfectly, but we will discuss some of the secondary narrative lines further in this article.

In The Carry On Companion, Robert Ross explains that the un-success of Carry On at Your Convenience was because the main Carry On public was part of the working class and turned out not being so amused by the treatment of the unionists portrayed in the film. (2) I think Carry On films worked better when laughing at higher institutions. In a way, I can understand why. Of course, the reasons why Vic Spanner always decides to go on strike are completely ridiculous, but this one remains mistreated by people like his own mother (Renée Houston) who doesn’t do much with her life except playing strip poker with Charles Coote. The film definitely presents an interesting contrast between the social classes, and none seems better than another. The opposition between Lewis and Vic represents this quite well. We don’t necessarily root for one of them in particular as they both have their flaws deriving from the milieu they come from. Carry On at Your Convenience only won back its production costs in 1976 after the film was distributed internationally and broadcasted on television. (3) But, honestly, if we forget the reason why it wasn’t a success and if the Carry On public was less susceptible, I don’t see why it couldn’t have been a success. 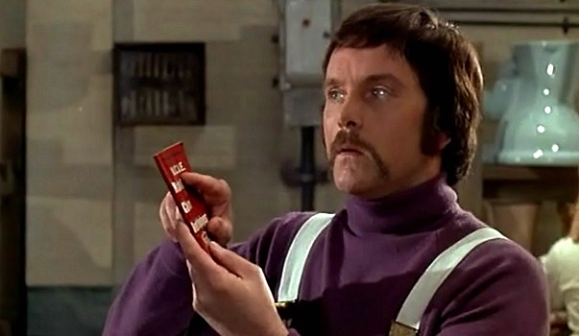 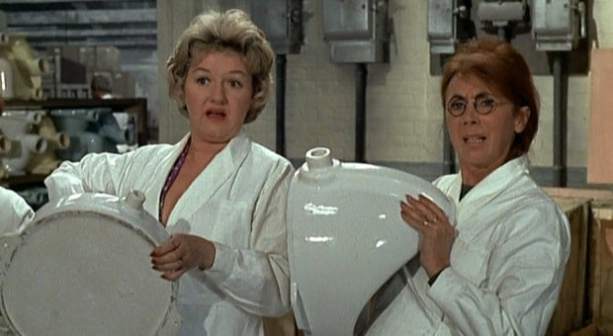 A bit like it was the case with Carry On Henry, we can easily associate the actors, and their characters in pairs or trios. It’s one of these Carry On films where the chemistry between the actors had to be strong for the story to work. In my opinion, it did.

Carry On at Your Convenience introduced Kenneth Cope to the series (yes, another Kenneth!). He then only starred in Carry On Matron, which is too bad because I thought he was quite a good addition. Kenneth Cope also played an extra in Carry On Jack years before. Cope and Bernard Bresslaw embody the leader and his follower in a delightfully caricatural way. Spanner leads everything by mostly thinking about his own interests. He uses Hulke as a tool for his own achievement. Bresslaw is hilarious as the guy who tries his best to help but who turns out to be completely clumsy. 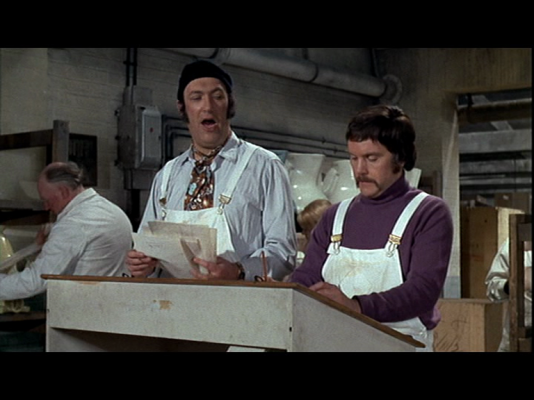 After his role in Carry On Loving, Richard O’Callaghan was back in an equally unforgettable but very different role. If he was a rather innocent and friendly guy in Loving, this time, he was mostly the rich man’s son who thinks he can do whatever he wants. At the same time, he plays a rather delightful version of his father played by Kenneth Williams. Of course, O’Callaghan doesn’t use the nasal voice that was so proper to Kenneth Williams, but he borrows some of his famous expressions such as “charming”, which help us remember he plays Williams’s son. On his side, Kenneth Williams was well-casted as the CEO of this toilet company and never stop amusing us with his unique mannerisms. 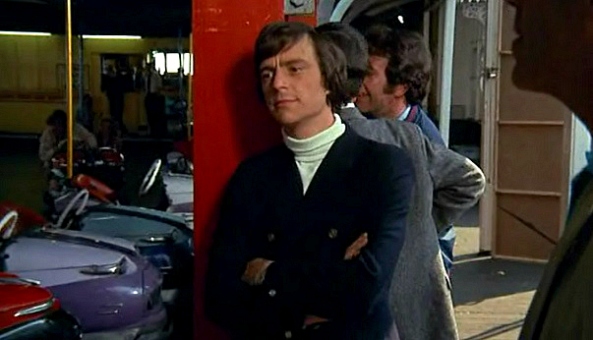 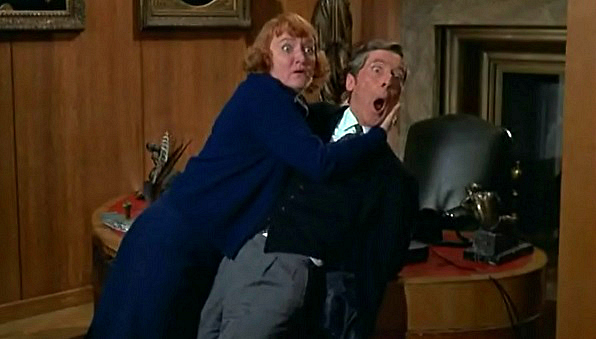 It seems that Richard O’Callaghan was more or less please by his role. At least, that’s the impression this testimony gives us:

“For Carry On At Your Convenience we were in Brighton for about three of four days and as far as I could tell all these films were made on a terrible shoe-string. Most of the location work was done on the Pinewood lot. So when we actually got a trip to Brighton most of the regulars were saying- “Oh? Are we actually going to somewhere away from Pinewood!?” They were quite amazed that they had decided to spend some money and go off down to Brighton where we were all put up in hotels. I saw the film about three or four years after it was made and I personally was very embarrassed by when I was doing. It was all so right wing and presenting the unionists as complete asses. I crept out of the cinema hoping nobody recognized me-fortunately they didn’t However, due to regular television showings, I’m still approached now by children pointing at me and saying – ‘You were Lew Boggs!'” (4)

Poor Richard. He obviously kept a good memory from Carry On Loving but not from this one. This might explain why he didn’t appear in the series after.

Perhaps the highlight of the film in terms of humour is the relation between Sid Plummer (Sid James) and his wife Beattie played by Hattie Jacques. Their relationship is challenged by a bird that is like their child, well Mrs Plummer’s child at least. She spends her days talking to it, hoping it will eventually reply something. It’s not a very expressive bird, as it never sings. However, Mr Plummer starts having a real interest for it when he discovers that this bird is more clever than it seems to be and is actually able to predict the results of horse races. 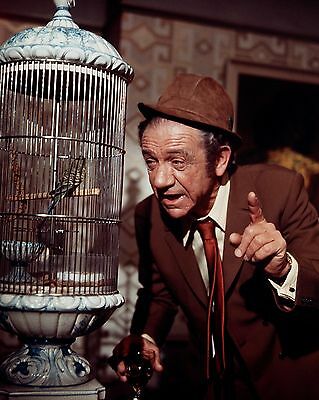 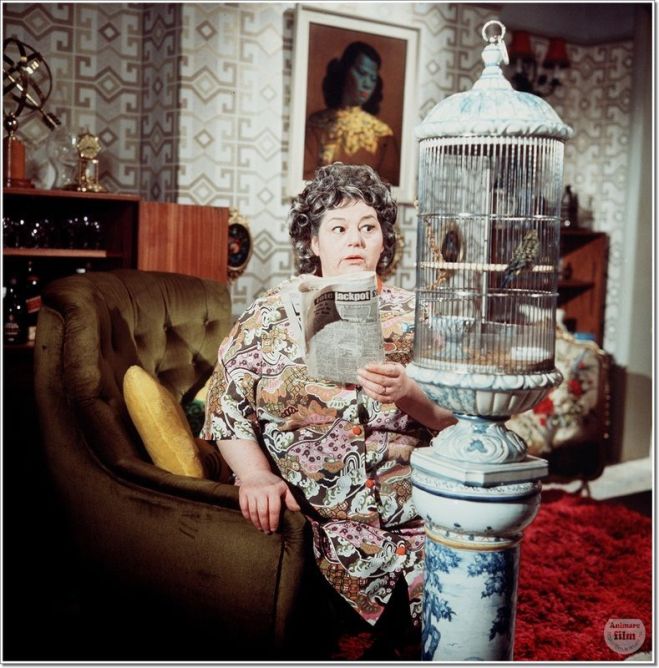 I thought Sid James and Joan Sims had tremendous chemistry which makes us realise that their respective characters are really made for each other. This is not only presented with humour but also in more serious moments, such as the one where Chloe Moore (Joan Sims) cannot invite Sid for tea because people might suspect something. You can see that they regret having to avoid each other that way because, when they are together, moments of joy are obvious, not just for them but also for the spectators. Actually, this scene about the tea is kind of sad which is not something that often happens in Carry On films. 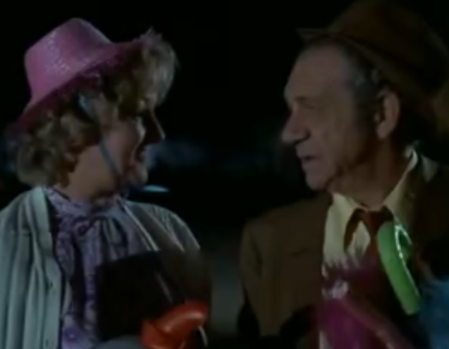 This was not the first Carry On film in which Renée Houston appeared, but it’s the first one where she has a relatively important and memorable part, this time, as Kenneth Cope’s mother. She and Charles Hawtrey make a hilarious team as partners in crime and strip poker players. This gives another side to their regular personality, the one they show in society. Mrs Spanner is an obviously strong woman who knows what she wants and takes no-nonsense from the opposing sex. Carry Ons weren’t necessarily feminist films, so this is done awkwardly, but we understand the somehow attempt to represent the liberated woman of the 60s-70s. Charles Hawtrey plays a quite likeable character and one that you could probably only find in a Carry On film. I mean, the guy designs toilets! If they present themselves as respectable people of the society, they get more free-spirited when they spent time together playing that curious card game. 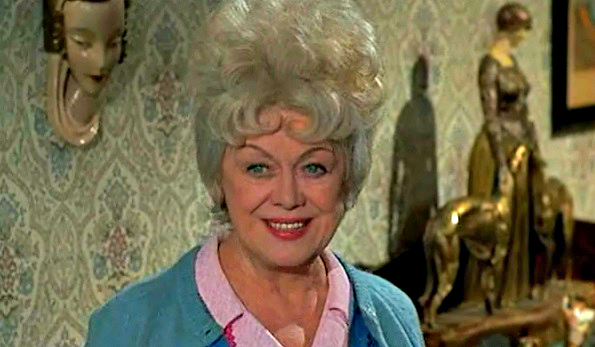 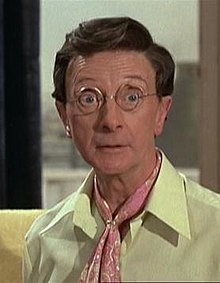 I have to admit that it took me time to understand that the character played by Jacki Piper was the daughter of the one played by Sid James. They aren’t often seen together, and not many clues are given about the matter. Was it intentional? I really don’t know. We understand that Myrle is part of the working class and that her father wouldn’t approve of her having a relationship with a man from the superior class (Lewis) but, since Sid seems to be in good connection with Mr Boggs, I only understood he was Myrtle’s father when it was explicitly said. Jacki Piper plays the usually lovely and dynamic girl that spectators can easily appreciate. 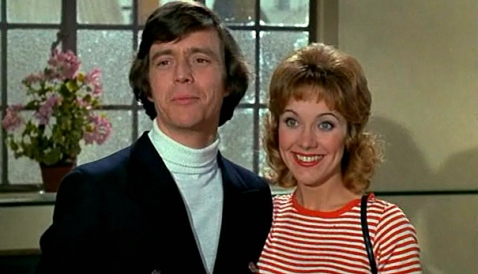 Carry On at Your Convenience does a good job in establishing some memorable lines and dialogues thanks to the always appreciated work of Talbot Rothwell. I’ve noted a few while I was watching it:

2- [Sid Plummer tries the toilet seat with a newspaper]:

Plummer: Yes, I don’t think I can stand it for more than half an hour.

Coote [insulte]: It was hardly designed for a reading room!

3- Plummer [to Mr Boggs, Lewis, and Coote]: Shhh! Can you hear anything?

Mr Boggs [surprised by the question]:…No.

Plummer: Neither can I!

4- Mrs Plummer [talking about the bird]: I thought he was going to talk just now. His beak opened and closed.

Mr Plummer [sarcasticly]: Fancy that! A bird opening and closing its beak. We’ll have to write to the newspaper about that.

5- [Coote opens the door only wearing undewears due to playing strip poker]:

Coote: Oh, that’s alright! I was just having a game, of course.

Coote: Would you care to have a game?

Coote: Oh oh oh! We’ll soon get those off you! 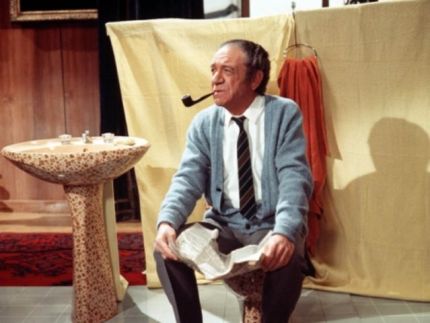 This is not an aspect I’ve discussed so often in my previous Carry On reviews, but I absolutely loved the costumes worn by Jacki Piper. Those are very 70s retro but in a way that could cross the ages and be easily worn today. They are super pretty but kept simple at the same time. These are clothes that creates an obvious contrast with the more traditional British clothes worn by Richard O’Callaghan and Kenneth Williams, very fancy and sober (and very British when thinking of the derby hat worn by Williams). Courtenay Elliott designed the costumes for  Carry On at Your Convenience. 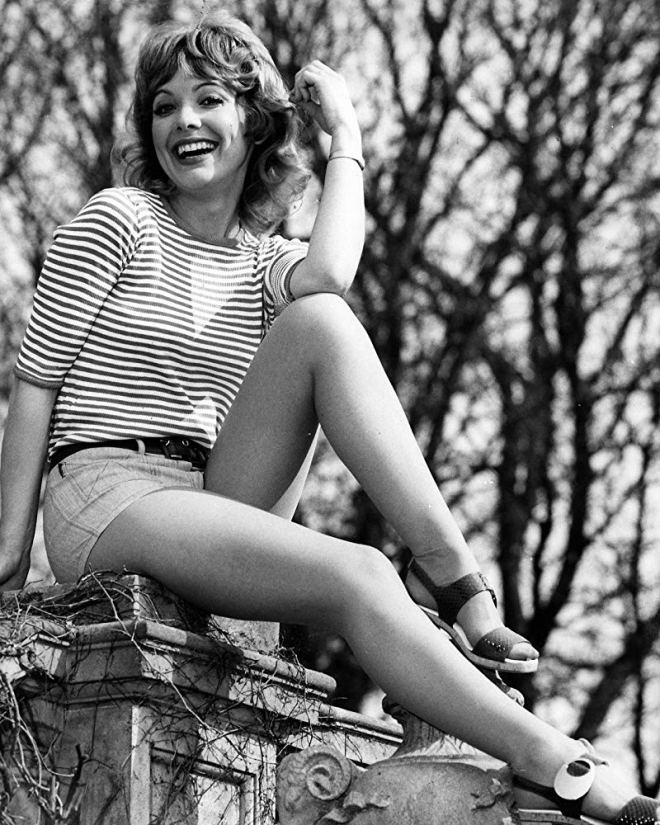 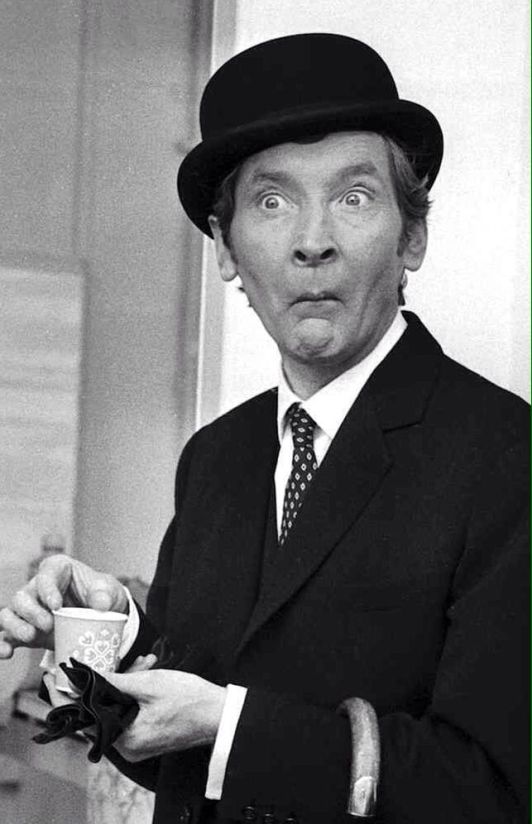 Carry On at Your Convenience could be classified among the good films of the series, even if it didn’t work too well on its original release. Yes, it was a bit too political and unfair to the working class but, except for that, it contains a lot of humorous moments that make it perfect Carry On material. 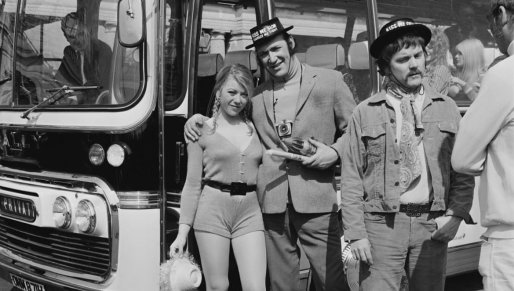 I’ve got to admit that, while I immensely enjoy going through the Carry On films, I feel I have less inspiration for my reviews especially since these films remain very similar from one another (even if the stories are different). I hope it’s not felt too much through my reviews, but those might start to get a bit shorter. I also feel that, at this point, we weren’t in the golden age of Carry On films anymore so it might explain why the films might not present so many interesting elements for discussion anymore. Well, we’ll see how it goes for the rest!

The next one I’ll review will be Carry On Matron, which was the 4th film of the series to take place in a hospital!

Carry On Up the Jungle 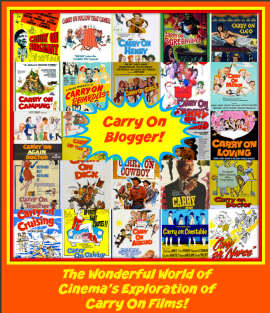 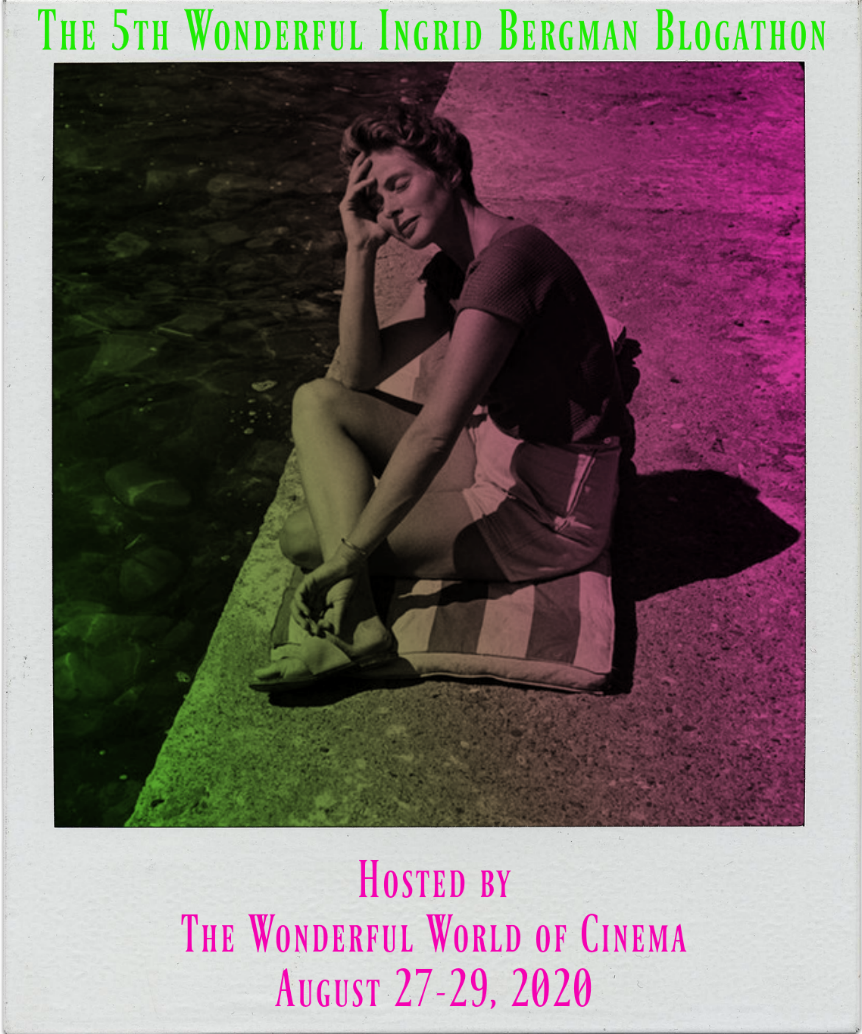