A few days ago, I watched what marked Talbot Rothwell’s last participation in the famous British comic Carry On franchise: Carry On Dick (Gerald Thomas, 1974). Before watching it, I honestly had no idea what to expect. I knew that the Carry Ons I had left to see were far from being the best. However, critics never really labelled Carry On Dick as being the worst or being among the worst. And it’s pretty much the way it felt when I watched it. It’s just one Carry On among many, BUT it’s a good one, easy to enjoy. Part of the reason why I liked it is because it reminded me of Don’t Lose Your Head, which is a Carry On that I immensely enjoyed.

Carry On Dick didn’t only mark Rothwell’s last contribution to the series, but be shocked to learn that it was also the farewell film of Sid James, Barbara Windsor, Hattie Jacques, Margaret Nolan, and Bill Maynard, an important group. Most of these actors had projects afterwards. However, for Hattie Jacques, this was her before-last film, and it was Sid James’s last film. The South African-born actor passed away two years after when he had a heart attack during a stage representation of  The Mating Season (Sam Cree, 1969). (1)

Although she officially stopped acting in the series after this one, Barbara Windsor was one of the co-hosts for That’s Carry On alongside Kenneth Williams. She, Sid James, and Hattie Jacques also all appeared in the 1975 TV series Carry On Laughing. However, from what I gather, these were not the same as the film. Proof: it only ran for two seasons while the films were expanded on 20 years with a (not very good) revival in the 90s.

Carry On Dick takes place in England in the mid-18th century. Dick Turpin (Sid James) is a notorious highway robber whom the authorities have never unmasked. He works with his acolytes Harriett (Barbara Windsor) and Tom (Peter Butterworth). King George has order Sir Roger Daley (Bernard Bresslaw), Captain Desmond Fancey (Kenneth Williams), and Sergeant Jock Strapp (Jack Douglas) to find this highway thief and stop him. But of course, Dick Turpin and his friend have more than one trick in their bag and aren’t so easy to catch. When he’s not robbing, Dick has a totally different occupation: he is Reverand Flasher, a respectable man hosting the mass every morning in his church. Who would suspect a clergyman of being a criminal? It’s a perfect cover. Harriett and Tom work and live at the church also, as well as Martha Hoggett (Hattie Jacques), the housekeeper (who’s unaware of Dick’s criminal activities). One of Turpin’s victims who will take an important place in the story is Madame Desiree (Joan Sims) and her “Birds of Paradises” who arrive at the village to perform at the Old Cock Inn, an HQ for many criminals. Kenneth Connor plays a constable and another of Dick Turpin’s many victims.

It’s easy to see why Carry On Dick is so similar to Don’t Lose Your Head. Sid James plays a “criminal”, someone going against the state laws, and Kenneth William tries to catch him. Both Dick Turpin and Sir Rodney Ffing are extremely cunning men that are quite hard to catch and masters of disguises. And both Captain Fancey and Citizen Camembert are stupid enough to fall into the traps that the men they are chasing put on their way. We also notice a resemblance between Joan Sims’s characters since she played a woman named Desirée on both occasions. In the first one, she’s a real French lady. In the second, she’s a faux-French. Finally, both Carry On Dick and Don’t Lose Your Head take place in the 18th century, more precisely in 1750 for Carry On Dick and in 1789 (during the French Revolution) for Don’t Lose Your Head. There is also a minor detail that brings us to compare Carry On Dick to Carry On Jack: the names of the pub/inn. One is Dirty Dicks (Jack), and the other one is The Old Cock Inn (Dick). Such charming names! 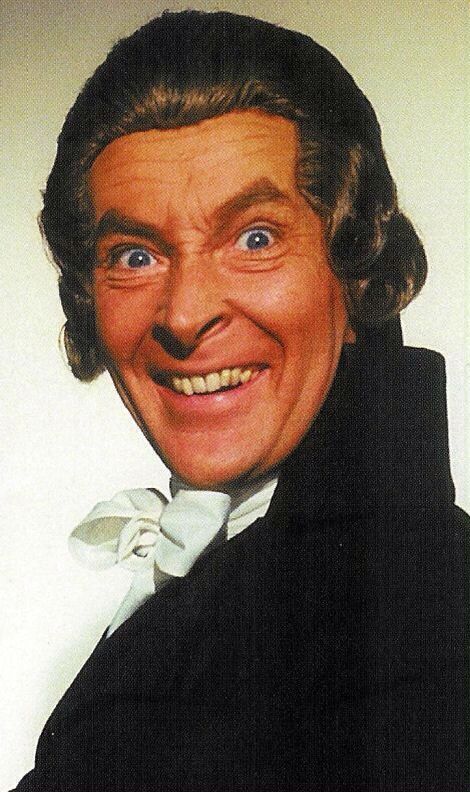 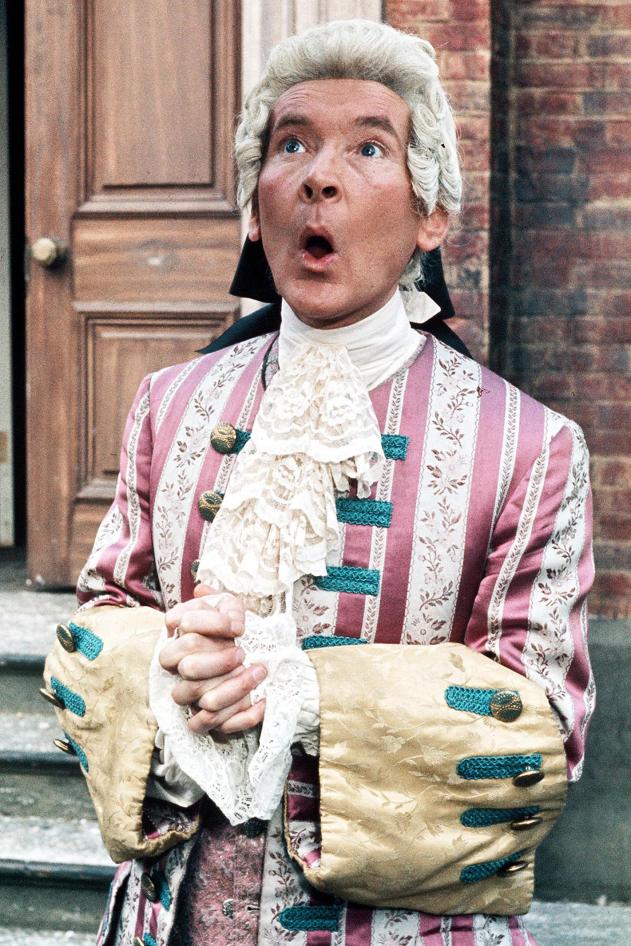 We know that Carry On films have parodied other films, directly or indirectly, on several occasions. When I was watching Carry On Dick, the first film that came to mind was The Wicked Lady (Leslie Arliss, 1945), which stars Margaret Lockwood and James Mason as lovers and dangerous highway robbers. I don’t think Dick‘s creators directly aimed it to be a parody of this film, but if there’s an English institution the Carry On team had to add on their list, it certainly was The Gainsborough Melodramas. After all, if we can name three significant series in the history of British cinema, it would be The Gainsborough Melodramas, The Hammer Horror films, and the Carry Ons. These were all successful series with recurrent actors but with very different themes and styles. In a way, we can sort of compare Dick Turpin to Barbara Skelton (the characters portrayed by Lockwood in The Wicked Lady): Respectable members of society during the day, criminals at night. 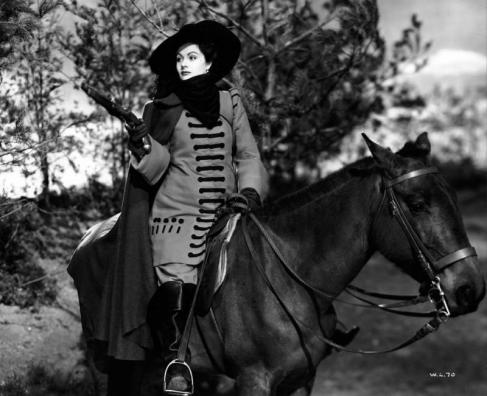 Dick Turpin was, as a matter of fact, a highwayman who truly existed (2), just like it was the case with Katherine Ferrers, the highwaywoman that inspired Magdalen King-Hall for the main character of her book The Life and Death of the Wicked Lady Skelton.  So, the film would be a parody of his life. Of course, the Carry On team took many liberties just like they did with Carry On Cleo (another film featuring real-life people). For example, Dick Turpin was, in reality, much younger than Sid James, who portrays him (he died at 33). And the life of the true Dick Turpin ended dramatically with his execution. Well, this is unlikely to happen in a Carry On – or humour has to set the tone. Of course, Sid James is excellent in the role, and, as I didn’t know he was playing a real-life person, the age difference is not something that bothered me during my viewing. Actually, from what I understand, Dick Turpin seems to be a quite important figure into British culture or history, so I feel a bit bad I had never heard of him before (I’m not British, but I’ve always been very interested in British culture). 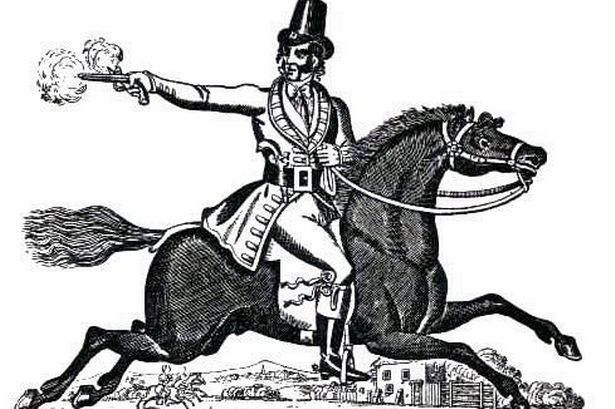 An article on RadioTime also compares Dick Turpin to Doctor Syn (3). Dr. Syn is the hero of a series of book by Russell Thorndike. There were three adaptations. I’ve seen the first, Doctor Syn (1937) which stars Leslie Arliss (and also Margaret Lockwood) in the title role. It’s not a film that marked my memory so well, so I didn’t really remember what the story was about. I checked a little summary, and the comparison makes sense. Dr. Syn is a philanthropic Vicar whom, just like Dick Turpin, only uses this role as a cover since his real occupation is to be the leader of the smugglers of the parish.

The last Carry On film scripted by Talbott Rothwell contains a ton of delicious innuendos which allowed the writer to bid farewell to the series in perfect Carry On-esque fashion. The first one we notice surely is when the narrator explains that Dick Turpin’s nickname is “The Big Dick” and that is due to “the size of his gun”. Hum! His “gun”. Jokes about Dick Turpin’s gun don’t stop here. When he is about to rob Desirée and her girls, he shows her his gun and says: “Excuse me, madame, I don’t think you’ve noticed what I’ve got here”. To what she answers: “Hum! That doesn’t scare me. I’ve seen bigger ones in my time!”

There are a lot of good performances in this film, but, in my opinion, Sid James and Kenneth Williams are the ones who stand out the most. I like the strong contrast that Sid James establishes between his two personas: the reverend and Dick Turpin. When he is Reverend Flasher, he is very calm, very wise, and then he becomes that fearless thief who is impossible to catch. He plays the role of the reverend so well that it’s no wonder why he fools so easily Kenneth Williams and the others who try to catch him! I think he could fool us too! I loved Kenneth Williams because he, once again, showcases some of his best facial expressions. He was excellent as the “enemy” in Don’t Lose Your Head, and so he is here. I couldn’t imagine someone else in the role. Barbara Windsor also delivers a lovely performance which makes us regret it had to be her last (in the series). 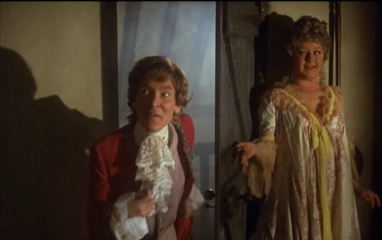 Even if Carry On Dick is not the most well-remembered film of the series, it goes without saying that it’s an important one as it certainly marked the end of an era. As I’ve said before, I had no idea what to expect,and, in the end, I quite liked it. So, it’s I would recommend you to see it!

I only have five Carry On films left to watch and review! The next one is Carry On Behind which marked the return of the much appreciated Liz Fraser!

Carry On Up the Jungle

Carry On at Your Convenience