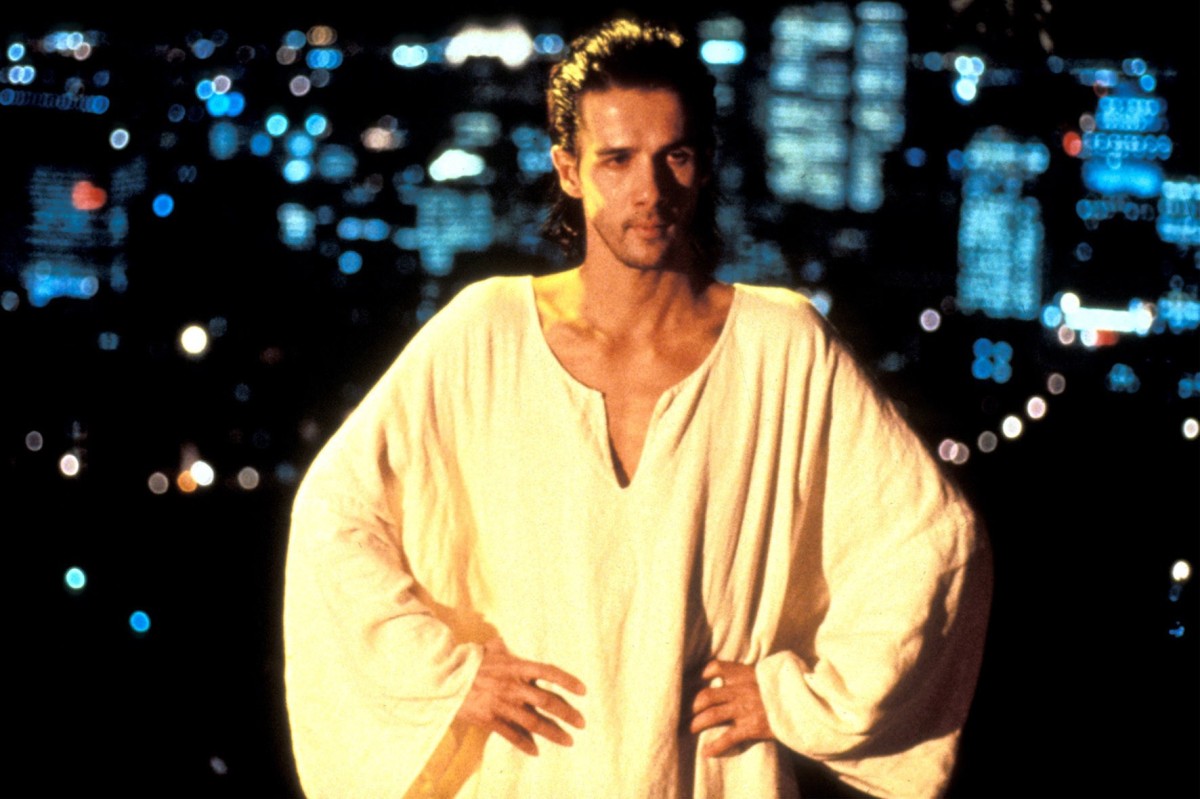 It seems like it’s been ages since I’ve written anything for a blogathon! Luckily, March is a month that has a lot of them in reserve, the perfect way for me to get back in business. And one of these blogathons is one of my very favourites; the O Canada Blogathon hosted by two amazing ladies, Ruth from Silver Screenings and Kristina from Speakeasy. After having told you about Glenn Ford’s hometown, actor Paul Dupuis, my favourite Quebecker film, C.R.A.Z.Y., I’m back with one of my best discoveries of 2019: Jesus of Montreal (Jésus de Montréal, Denys Arcand, 1989) that I watched for the first time last Fall.

Jésus de Montréal is a film I had heard of long before seeing it, especially because Denys Arcand is one of our best-reputed movie directors here in Quebec but also internationally. He won several awards, including the Oscar for Best Foreign film in 2004 for The Barbarian Invasions (Les Invasions Barbares, 2003). Among his most successful films are also The Decline of the American Empire (Le Déclin de l’empire américain, 1986), Days of Darkness (L’âge des ténèbres, 2007), and today’s subject, Jésus de Montréal. With that being said, the film in question had never really been on my to-see list. Not because I didn’t want to see it, but mostly because there are a ton of great films to see and this one wasn’t necessarily among my priorities. It’s thanks to my parents that I actually decided to watch it. They caught it on television last summer and sort of realized what a great film it was. Anyway, they sold it to me perfectly, and I then made sure to watch it as soon as possible.

Jésus de Montréal takes place… In Montreal (!) and tells the story of a group of actors who are in charge of staging a play on Jesus’s crucifixion. A Catholic priest, Father Leclerc (Gilles Pelletier), hires young actor, Daniel Coulombe (Lothaire Bluteau) to modernize the Passion play that had been presented at the sanctuary for more than 30 years. Daniel is to play Jesus, but he needs more actors to help him re-write the play and incarnate the various biblical characters. He finds them within various milieux. One of them is Constance (Johanne-Marie Tremblay), a graduated from the theatre conservatory, like Daniel and who has appeared in the play before. Martin (Rémy Girard) does dubbing for porn movies. René (Robert Lepage) narrates projections at what might be Montreal’s Planetarium (it’s never said explicitly), and Mireille (Catherine Wilkening), is a young French actress whom, so far, mostly had success playing sexy girls in TV commercials but who will prove the worlds she’s worth better than that. The play is successfully attended by an attentive public but doesn’t please Father Leclerc. The thing is, Daniel and his friends might have modernized it a little too much, by including arguments stipulating that Jesus was  the son of a Roman soldier and other surprising theories.

The main reason why this film is brilliant is that one doesn’t need to be Christian or believe in any gods or religions to appreciate it. I’m the living proof! It’s not a religious film like the ones people watch during Easter. It’s just a film using one of the oldest stories ever  told to build around it a rich development. Jésus de Montréal is a film with a lot of sensibility, symbolism (the connection between Daniel Coulombe and Jesus himself become, at one point, quite strong), and undeniable humour. It successfully explores the emotional extremes, the tragic and the comic, resulting in a captivating viewing. The film combines the actor’s life in 1989 as well as scenes from the Passion of the Christ re-enacted by those actors. The reason why they manage to attract such a public is not only because they re-interpreted it, but also because they know how to use their talents to tell a story in a surprising way even tho pretty much everybody knows how it ends. They write a play that gives a lot of nuances to historical facts and, therefore, makes it credible since,it’s true that it is difficult to know exactly what happened more than 2000 years ago, even with the numerous advancements in science and technology.

And Jésus de Montréal is also a film giving us a beautiful lesson of friendship and compassion. Those five actors are here for each other from the beginning until the end. They share Contance’s place and support each other during difficult moments and share their joys during happy ones. Daniel Coulombe remains at the centre of this quintet, and it’s perhaps because of him that they all become better persons. Like Jesus, he guides them without having to make a lot of efforts. He’s a rich character who sees people for more than what they are. One of the best examples would be this scene where he accompanies Mireille to an audition for a beer commercial. Before starting her audition, the crew members ask her to remove her pants and her top so they can see her body. Mireille has forgotten to bring a bikini and doesn’t wear anything underneath her sweater. She believes that she has no choices if she wants to be cast for the commercial, but Daniel begs her not to do that. He knows that she’s worth better than that, especially since she was able to prove it during the first representation of the Passion play. Enraged after those who exploit her, he gets into a violent rage and destroys the set. And, as much as the damages are big, they kind of deserved it. At the trial, he refuses to be represented by a lawyer and pleads guilty because he’s able to assume his acts. That’s wisdom for you. 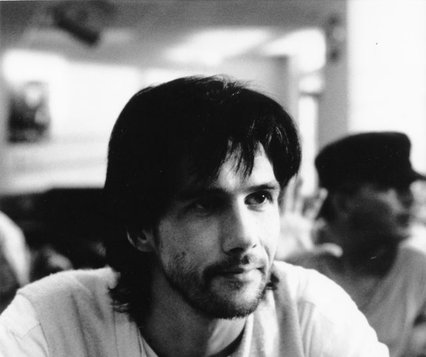 Jésus de Montréal also remains particularly memorable for its casting. Indeed, it regroups a bunch of famous and highly talented Quebecer actors in the main roles or smaller ones: Lothaire Bluteau, Johanne-Marie Tremblay, Rémy Girard, Robert Lepage, Gilles Pelletier (who, interestingly, also played a priest in Hitchcock’s I Confess (1953)!), Yves Jacques, Claude Léveillé, Marcel Sabourin, Paule Baillargeon, Véronique LeFlaguais, Monique Miller, Pauline Martin, Gaston Lepage, Marc Messier, Andrée Lachapelle, Roy Dupuis, etc. You might be familiar or not with this bunch of actors, but I can assure you that’s what we call an all-star cast. And Denys Arcand has always been great for those. 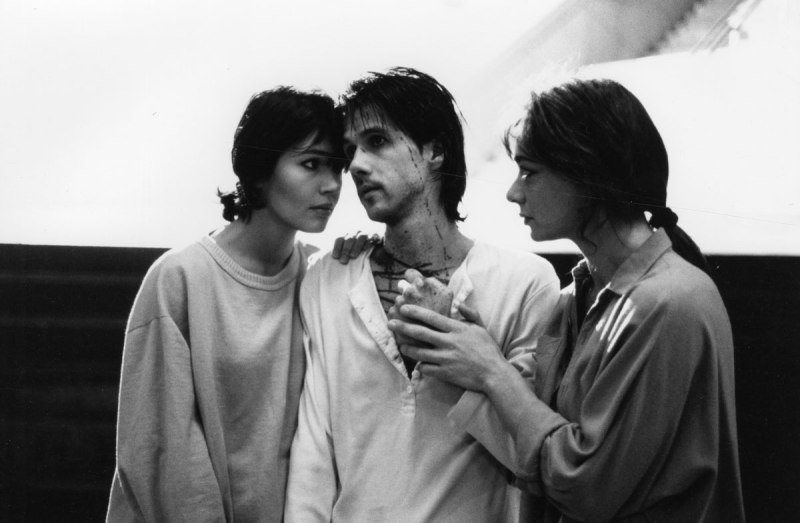 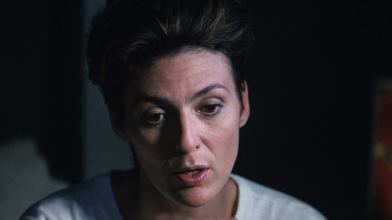 If I can tell a little life anecdote… As you know, I used to work in a movie theatre in Montreal and on some occasions, I had the chance to see some of these actors. I saw Rémy Girard twice and was very intimidated as he is one of my favourite actors. I saw Yves Jacques twice as well, and he seems to be a very adorable person.

The screenplay was also brilliantly executed, not only because Denys Arcand knew how to use a biblical story and make it attractive for anybody, but also simply for being worthy of the best cinema that we make here in Quebec. I love how it caricatures all types of people, one of the best examples probably being the radio columnists and TV hosts played by Pauline Martin, Véronique LeFlaguais and Jean-Louis Millette. They are always  so emotional and uses the exact same words to prove that they know how to appreciate art. We can also think of this couple of conspirators who tell Martin and René about their numerous encounters with Jesus, a very amusing scene due to the contrast between the spiritual and quite zany couple and the more down-to-Earth comedians. It’s a film with too many memorable scenes to name them all.

Jésus de Montréal was shot on location, in Montreal, using the best of its institutions, including Churches, the luminous interior used for Constance’s house, and the archive library. Interestingly, the city is often shown in a bird-eyes point of you which sort of symbolizes God’s gaze on the world. (1)

If you have never seen this film, the good news is that it’s available on YouTube with English subtitles! It’s not one of those Quebecer films that might be hard to seize for international audiences so, give yourself a favour and don’t wait too long before seeing it! It’s not HD quality, but it’s pretty fair!

And, hopefully, my review, as well as this trailer, will encourage you to watch it.

Many thanks to Kristina and Ruth for hosting this long-awaited event and for allowing me to discuss the memorable film that Jésus de Montréal is. It’s always a pleasure for me to make my fellow bloggers discover films and actors from the beautiful province of Quebec!

Make sure to read the other entries: