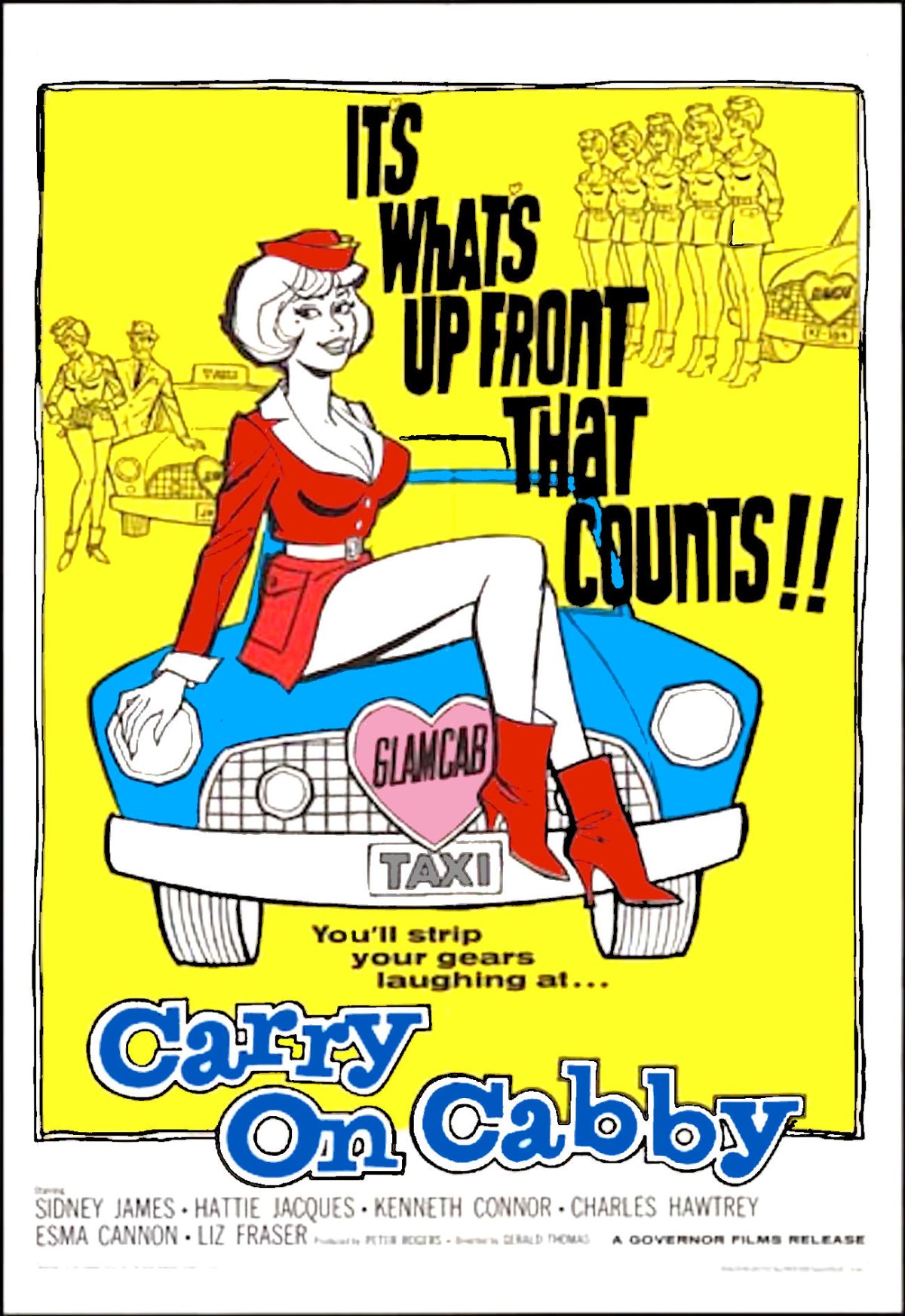 We’ve already been through a week of Carry On films! To end this in beauty, we’re back with a more simple film of the series, leaving the colour of Carry On Cruising behind, with Carry On Cabby. Released in 1963, Carry On Cabby had the particularity to have a new screenwriter, Talbot Rothwell, instead of the usual Norman Hudis. The film was still produced by Peter Rogers and directed by Gerald Thomas. Did it suffer from such a replacement? Hum, not necessarily. I think Thomas and Rogers were here to handle things correctly and make sure it would remain a good old Carry On, just the way we like it. Rothwell became the regular writer of Carry On films (but a few exceptions), and we know that some of the post-Carry On Cabby films such as Carry On Cleo, Carry On Camping, and Carry On Up the Khyber are considered among the best of the series.

What will mark us more about this film is probably the absence of Kenneth Williams, whom we usually expect to pop up one way or another as he was so central to the Carry On humour. However, Charles Hawtrey was back after his absence from Carry On Cruising and so was Hattie Jacques. As a matter of fact, Carry On Cabby is pretty worth watching for the simple reason that Jacques plays a central character in opposition to the previous Carry On films where she mostly played supporting roles or did very short one-scene appearances. The film also featured the first appearance by Jim Dale who also became a regular Carry On actor. Carry On Cabby might not be the one people remember best, but it’s an agreeable film with inventive gags that make it a highly appreciable entertainment.

Carry On Cabby mainly revolves around the taxi driving business. Charlie Hawkins (Sid James) is the owner of a taxi company, Speedee Taxis. His wife, Peggy (Hattie Jacques), feels he neglects her and only thinks of his work. Which is, let’s admit it, true. On their wedding anniversary, he almost forgets the occasion but redeems himself by buying her a fur coat. However, Peggy also wishes to go out with her husband to celebrate. On his way home, Charlie is stopped by a man (Jim Dale) who’s in state of panic in the middle of the road. His wife is expecting a baby, and they desperately need a cab to take her to the hospital. Naturally, Charlie cannot leave them here with their troubles, so he accepts to take them. When they arrive at the hospital, the husband declares that it was just “a false alarm” so they go back, to Charlie’s great annoyance. But, back home, the expectation of a baby seems real once again. So, they do these roundtrips a few times until the baby is finally born. Of course, it’s now late at night, and Charlie has completely missed his evening out with his wife. 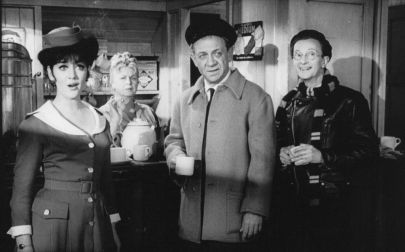 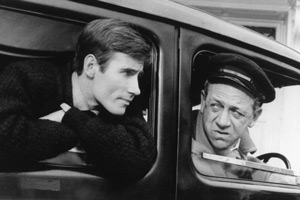 But Peggy hasn’t said her last word. She decides to get revenge, first by declaring that she’s going to “get a job”, wish doesn’t please her husband so much. She goes further by creating her own cab company, GlamCabs, with sexy girls as drivers. She’s helped and supported by Flo Sims (Esma Cannon) and Sally (Liz Fraser). Because of their secret weapon (attractive women), GlamCabs becomes much more successful than Speedee Taxis. Charlie Hawkins declares war, although he doesn’t know yet that his wife is beyond all that. It will be more difficult than he thinks! 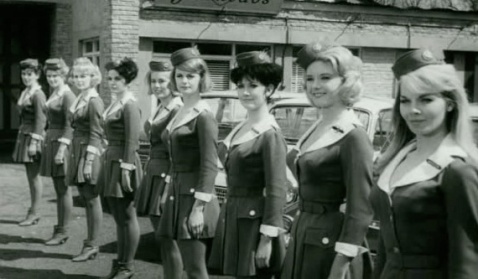 Aside from that, Charlie also has to train a new driver, the much clumsy Terry “Pintpot” Tankard, who is, not surprisingly, played by Charles Hawtrey! Kenneth Connor and Bill Owen are also part of the Speedee Taxi team as Ted Watson and Smiley Sims. That, however, would be the last Carry On film to feature Bill Owen, to our biggest regret.

It certainly felt like a breath of fresh air to finally see Hattie Jacques in one of the main roles. This woman could be authoritarian and impressive, but her characters also had that big heart and sensibility that made them highly appreciable. I’m also impressed by the ability she had to change her voice according to the character she was playing. It always fit well with the mood she intended to create. Her voice is low and serious in Carry On Teacher as she needs to inspire respect among the students. In Carry On Cabby, it is softer and higher but still has that assurance proving to us that Peggy is  a strong woman who has more than one trick in her bag. Actually, according to IMDB, Jacques was called “Mother Superior” by her fellow cast members of the Carry On films. That was due to “her compassionate nature and willingness to help other cast members with their personal problems”. (1) That is precisely how I would imagine her, and I think that made her perfect for the kind of characters she was playing in the series. Hattie Jacques was a woman with a golden heart! 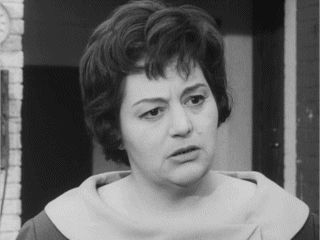 I’m glad also that she and Sid James finally played a couple in this film. I thought their chemistry was just perfect in Carry On Constable, so that was a highly expected match. Of course, he’s not the most attentive husband, but, if we consider the acting teamwork first, they completed each other pretty well. They were able to give another magic vibe to this Carry On film. The female friendship chemistry that she has with Esma Cannon was also one of the best aspects of the film. Sadly, this was one of Cannon’s last films. 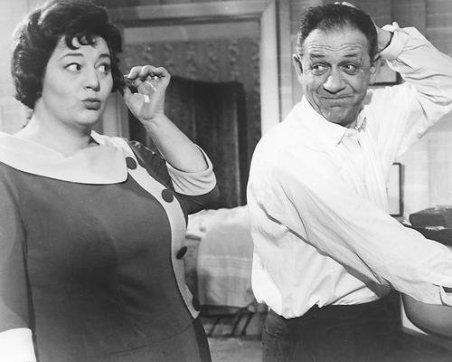 As I said earlier, this was Charles Hawtrey’s return, and his character might have been one of my favourites among those he played (so far) because he’s more random than ever. In Hawtrey’s case, that’s a compliment because that’s how we like him! Also, his outfit with the leather jacket and the scarf was kind of stylish, which is not something we would normally say of Charles Hawtrey! But then, I’m just mad about scarves. A moment that made me laugh a lot is when Sid James is calling him on the cab radio but, in reality, he’s just behind him in the office. Of course, there’s a whole context to that, but I’ll let you watch the film to discover it. 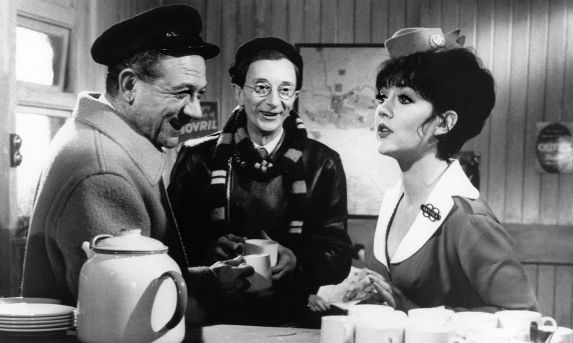 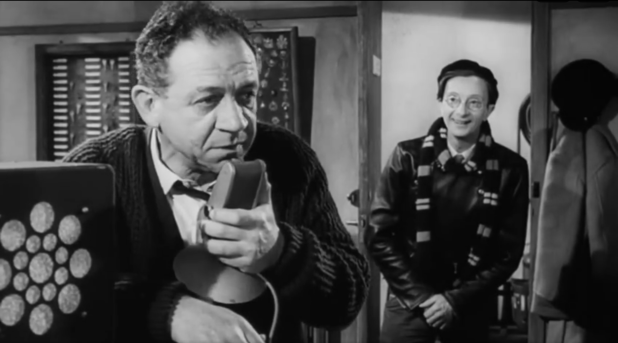 Kenneth Connor was still here and, although he’s a huge favourite of mine among the Carry On actors, this wasn’t necessarily his most memorable performance. Well, if you compare it with Horace Strong from Carry On Sergeant anyway. But, his presence was still appreciated.

One last observation I would like to make about the casting is the presence of Renée Houston, who plays a barmaid! Actually, I hadn’t realized it was her until I looked at the distribution on the internet. Well, that makes the casting even more interesting. Houston is also in another favourite film of mine, A Girl Must Live, but that was released in 1939. So, she was much younger at the time.

What I also particularly liked about Carry On Cabby is the fact that, at one point, the cabs become little characters. The film creators knew how to use them and give them the proper dimension because, after all, the film revolves around them. I more precisely think of that stressful and suspenseful final when [SPOILER] Peggy and Sally are hijacked by bank robbers in one of the GlamCab cars. Clever, Peggy manages to communicate with her husband with the cab radio, and this one organises a trap with his taxi driver to capture the bad guys and save Peggy and Sally. [END OF SPOILER] Visually, this leads us to images where the black cabs create a pretty visual composition and become an important part of the action. 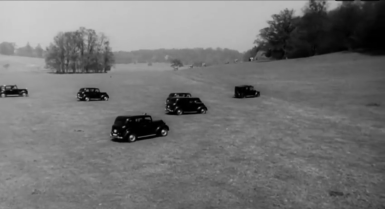 Interestingly, the film was initially not meant to be part of the Carry On series and was to be called Call Me A Cab. But, eventually, it  joined the six previous films that had composed the franchise so far and was released as Carry On Cabby. And, despite the absence of Joan Sims and Kenneth Williams, we agree that it pretty much had all the ingredients  to be one.

Carry On Cabby, I believe, deserves more attention than it gets. I would call it an underrated Carry On and would invite you to see it if you’re, once again, in the mood for some crazy Carry On fun!

Tomorrow, I’d be discussing Carry On Jack. It is not known to be the best of the series, but it reserves us some good surprises!