The following review of Journey to Italy has been written by Carole MacLeod, guest at The Wonderful World of Cinema, for the 3rd Wonderful Ingrid Bergman Blogathon.

Thank you for letting me be part of the third annual Ingrid Bergman blogathon.

I’ve been intrigued by Ingrid since I was ten, and was given a book Called Screen Goddesses. It was about many actresses: both the Hepburns, Audrey and Kate, Kim Novak, Mae West, the incomparable Rita Hayworth-and, of course, Ingrid Bergman.

The profile for Ingrid stated,” she didn’t need a ton of goo on her face…” needless to say, it’s a book that’s typical of its time, and doesn’t go into great deal about the nuances of her films. But it did have a complete filmography of her work and some really beautiful pictures. I didn’t quite appreciate Ingrid’s beauty then-I was more interested in Garbo, dressed in outrageous lame, or Jeanne Eagles, being chased by Jeff Chandler.

Fortunately I reread the book when I was a few years older and became intrigued by Ingrid. There was no TCM and no internet, but when CBC announced it would be showing Casablanca as a late night feature I was on the case. I stayed up late and was rewarded by seeing Ingrid’s work on film. I was hooked by her beauty. Her grace, her poise, her accent, her ability to make a scene come alive. How was it possible she only had two men interested in her? Everyone should have bowed down to worship her!

In November of 1946 Ingrid brought her interpretation of Joan of Arc to the stage. One evening there was a small technical problem and she thought the audience would laugh at her, because she fell while wearing a suit of armour. She writes, “ I learned at that moment that the audience doesn’t want anything to happen to you-they’re sorry for
you; they’re on your side; they don’t laugh at you; they weep for you. Yes, they laugh when it’s funny-when you ask them to laugh-but when it’s serious they hold their breath waiting for you to take hold again.”

With this attitude in mind I can understand how perplexing the rest of the 1940’s and 1950’s must have been to her. Ingrid approached the director Roberto Rosellini, suggesting they could find a project to work on. The project was Stromboli, and the two began an affair that shocked the world. Their marriage produced three children, and lasted for years. For the readers who are interested in this part of Ingrid’s story I recommend the Criterion Collection “ Ingrid Bergman In Her Own Words” which was made to mark the 100th anniversary of her birth. It has extensive home movie footage and long interviews with all four of Ingrid’s children. They describe their parents’
relationship, both in life and on film, better than anyone can-plus, this post is about Journey to Italy.

Journey to Italy came to life in part due to financial need. The Bergman/Rosellini family needed an income, and the film world seemed reluctant to accept them at that time. Liana Ferri, Rosellini’s translator, describes him as a person who showed different character traits to different people. He was, in her words, shrewd, foxy, and had a lot of problems: money problems, contract problems, and women problems. If he lived in peace, he was dead. (see Ingrid Bergman autobiography, p 205).

Journey to Italy begins with Alex and Catherine ( George Saunders and Ingrid Bergman) travelling in Italy in style. He’s wearing a perfectly cut jacket with four button holes at the cuff: she’s wearing a tightly belted leopard skin coat and beautiful maquillage. They’re in Italy to settle their uncle Homer’s estate. Right away there is a sense of tension between them : of uncomfortable silence and the need to fill the air with sound. The problem with speaking is that they use words as weapons. After eight years of marriage they know each other’s weak spots and choose to use this knowledge to hurt each other. They cannot be alone together, not even to have a quiet drink. They have developed a sophisticated method to hurt each other with words.

In the bar they’re joined by a vivacious group of young people. Catherine watches her husband light a cigarette for an attractive, younger woman. She sees her husband as he appears to others and she is jealous. The next day she tells him as much, as he is just waking from a deep sleep. Partly to pique his jealousy, and partly because of their beautiful surroundings, Catherine chooses to remind Alex of a young man they both knew-a poet named Charles. Charles fought in the war and died before his work could be published. He had been exposed to gas and his lungs were destroyed.

The next day there is a swift quarrel between Alex and Catherine. Catherine leaves the villa to tour a museum that may have meant something to Charles (he had been stationed there in the way). Catherine wants her husband to be punished for his pride and his self assurance. Immediately upon entering the museum the music changes, suggesting Catherine’s inner turmoil. There are many long, lingering closeups of the sculptures, including the Venus the guide likes the best. The guide says this is his favourite Venus because she’s not as young as the others-she’s more mature. Catherine claims to not understand what the guide means. The closeups of the statues of the young men disturb her. They remind her of Charles, and the image she has of him in her mind. She has aged while her memory of him has not. She knows she has changed mentally too and has become bitter and cynical.

When she arrives home Alex is genuinely interested in what she has seen and experienced, but she snaps at him. George Saunders, as Alex, does an excellent job of letting the pain of the attack show in his face. His features twist in pain but he is used to this sort of interaction with is wife: it’s both painful and expected. There is a tiny flutter of emotion which he is quick to shut down, and his face returns swiftly to his suave mask. It’s a beautiful piece of work.

A commotion outside causes them to come to the window. A couple who are engaged have been fighting. Alex wants to know how anyone can be jealous before the wedding, and Catherine explains the time before a wedding is a very tentative time. Alex looks at his wife with a glimmer of understanding. He has just gained an important insight into his wife’s past and her present.

That night they attend a small party. Catherine’s beauty and grace make her the centre of attention, and she laughs, throwing her head back, showing her beautiful teeth. All the men openly admire her elegant beauty, and again Alex is jealous. He shows his jealousy by ignoring her. The next day Catherine visits a temple where people pay homage to a Sybil who can tell them what their future has in store for love. Catherine is still angry with her husband and she moves through the shrine with Charles’ poetry echoing in her ears. She tries to retain her cynical carapace as a coping mechanism but the beauty of the Temple of Appollo is too great for her to succeed. She leaves the temple and sees couples and children everywhere. There is a reference to death as a feeling of being abandoned and alone. It is clear Catherine can relate. She returns to her empty room to play solitaire, and wait for her husband to return.

Once Alex returns she waits for him in the dark of her room. She knows his routine and his habits and it’s clear that she loves him. As she tries to express any tenderness he rebukes her cuttingly. Her pain is now evident in her face and she cries in frustration. This couple really knows how to hurt each other.

The next day she fails to wake him at the hour he had asked her to. She visits another shrine and is overcome with emotion. Later in the day they visit Pompeii just as a couple’s body are excavated. Catherine is so over come she has to leave. Alex does not offer her his arm for support. They have decided to divorce as they are forced to wait for the ceremonial passing of a saint. It is a feast day and this saint has the power to perform miracles. One follower holds up his crutches-she has caused him to walk again. Does the saint have an affect on Alex and Catherine? If you have not seen this film stop reading here: yes she does! The ending is hopeful for our characters. 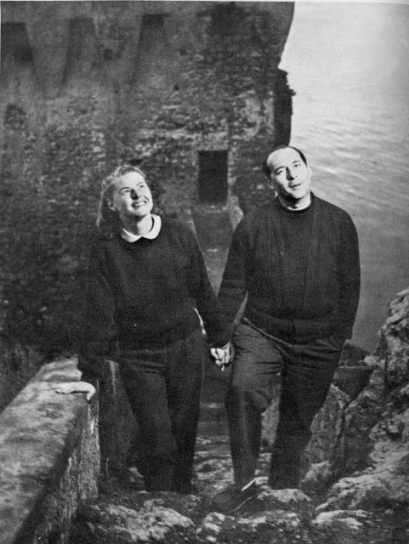 Rosellini did a beautiful job of directing this film. There are gorgeous closeups of Ingrid throuout and her wardrobe is elegant. The dialogue is swift and the plot flows well. When I first saw this film I wasn’t moved by it: I thought he was trying for a Hollywood Douglas Sirk like effect. Now I’ve hanged my opinion. Rosellini was used to juggling several relationships at once and even left Anna Magnani for Ingrid Bergman. I think his neorealism had developed to the point where he could now express a whole panoply of emotions in his films. Both Ingrid and George were frustrated by the seeming lack of planning for this film: the dialogue was changed every night and the shooting was
constantly interrupted. Perhaps Rosellini used this to add to the tension in the first part of the film.

Ingrid understood at the time that the public simply would not accept her in the Rosellini films. She took responsibility for brusing the career of one of the fathers of neo realism. Her Holllywood career was simply to big for Italian cinema at that time. Privately she hoped that in time the films might better be appreciated. Her sentiments are echoed by Isabella Rosellini, in the short interview that accompanies the Criterion collections version of Rosellini’s Generale della Rovere. Isabella says the films failed commercially because at that time no one wanted to see Ingrid Bergman in a Roberto Rosellini film. I believe that over time they’ve held up remarkably well. I recommend that fans of Ingrid’s work take the time to watch this film and appreciate it. It’s not Casablanca, for sure-it’s to be appreciated on its own merits. Journey to Italy is as unique as Intermezzo and represents an important part of Ingrid’s cannon of work.