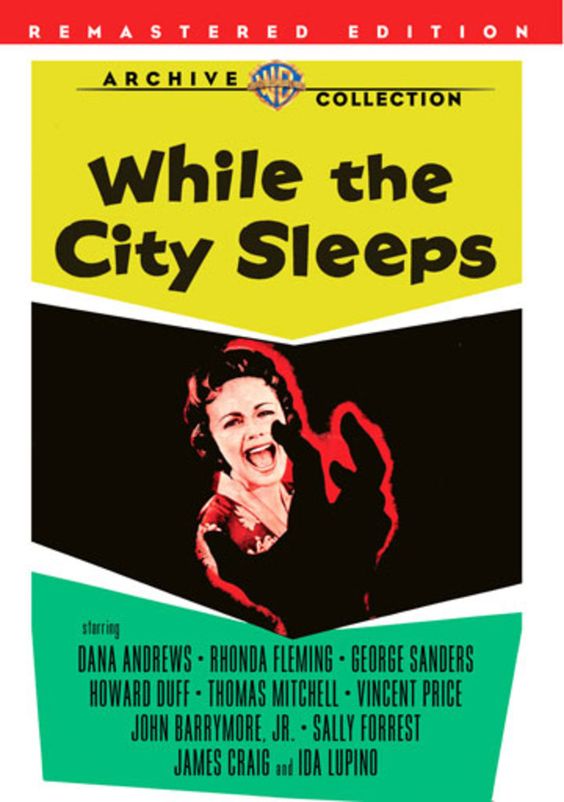 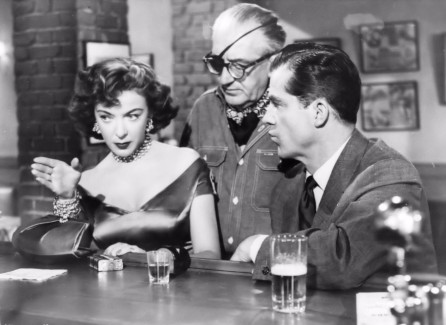 When Gill from Real Weegie Midget Reviews announced that she was co-hosting a blogathon with Cinematic Catharsis honouring the one and only Vincent Price, I first went through his filmography to see which film I could review. My attention was dragged to Fritz Lang before-last American film: While the City Sleeps (1956). I have a strange “relation” with that film because I somehow couldn’t say if I had seen it or not. I have no idea why! Spoiler: I had not seen it (prior to this blogathon). Anyway, since Fritz Lang is a favourite, and that I’m rarely disappointed by his work, I decided to give it a go. As usual, I loved the picture. Another reason that drove me to watch it was the fact that one of my teachers mentioned it in class. I thought his ideas and comments on it were pretty interesting.

While the City Sleeps is a film noir that revolves around the murder of innocent women by a young man, Robert Manners (John Drew Barrymore), known as the “Lipstick Killer” (ps: this is not a spoiler). The TV and media society Kyne Inc. is made aware of the first (or first-discovered) murder. Not long after, the head of Kyne, Amos Kyne (Robert Warwick) passes away, probably due to a long illness. He dies while he’s discussing the faith of the society with news presenter (and the main character of this story) Edward Mobley (Dana Andrews). After the passing of Kyne, his son Walter (Vincent Price) becomes the new CEO. Because he doesn’t know much about the job and doesn’t want to hold all the responsibilities, Walter decides to open a new executive director post. To choose who will be assigned to this important task, he decides to challenge the heads of Kyne three divisions: Mark Loving (George Sanders), the head of the wire service; Jon Day Griffith (Thomas Mitchell), the head of the newspaper division, and his supposed friend Harry Kritzer (James Craig), who is having an affair with Walter’s wife, Dorothy (Rhonda Fleming). The challenge is the following one: to discover who is the Lipstick Killer and catch him. The productive executor job will go to the first one to solve this mystery. 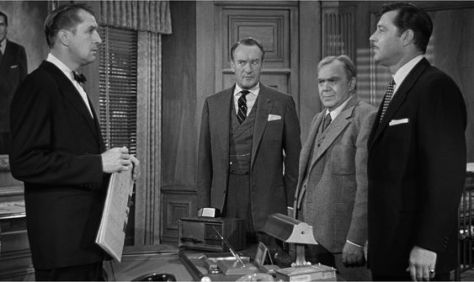 To do so, Griffith decides to work with Mobley (who is resistant at first since he doesn’t want to get involved in that business). That is convenient since Mobley happens to be the friend of a detective, Lt. Burt Kaufman (Howard Duff). Loving works with star writer Mildred Donner (Ida Lupino) and, of course, Kritzer has the chief‘s wife at his disposition.

Sally Forrest plays Loving’s secretary, Nancy Liggett, and Mobley’s girlfriend. The two eventually get engaged, and Sally will play an essential role in the catching of the criminal.

I’m surprised people don’t talk more about While the City Sleeps. I mean, have you seen this casting!? Brilliant actors and character actors seem to make an entrance every minute. The film was my introduction to John Drew Barrymore (the son of John Barrymore and Dolores Costello and Drew Barrymore’s father). He was still fairly young when he made that film (24). And then, we have those already well-established Hollywood actors that have graced many classics before to this one.

Vincent Price was quite perfectly cast as Walter Kyne. He first gives a sort of austere tone to his character with his long black coat and hat. He then moulds himself into the man whom his father didn’t exactly admire, kind of lazy and selfish. We know from the first minute that he won’t exactly be the character we’ll be rooting for, probably because he’s far different from his good-hearted father. It’s not a character we hate, just one that doesn’t necessarily attract our sympathy. Vincent Price, in all due respect, was great at playing these roles.

Thomas Mitchell is, well, Thomas Mitchell. Always that little man that brings humour and a sort of light dynamism to a film even when it’s a noir. He works well with Dana Andrew. This one was apparently drunk during most of the production (1). Andrews had alcohol problems that he was, luckily, eventually able to solve. Ironically, his character is drunk half of the time, so his condition added a sad realism to his performance. Nevertheless, his acting remains credible in the sober scenes, and he has great chemistry with the other actors.

Although Howard Duff, who was very good as the detective, and Ida Lupino were married at the time, they don’t have any screentime together. Lupino, with her low voice, elegance, and self-assurance makes the perfect gossip columnist. About George Sanders, I would not say that this was necessarily his most memorable role, but he’s convincing nonetheless, and his scenes with Ida Lupino have a lot of potentials. Rhonda Fleming, just like Lupino, sort of plays a femme fatale role (without really being one) and she does it well. Finally, James Craig’s is the only one who truly doesn’t impress. That is probably because his character is rather dull and, unfortunately, not one that has a lot of development. 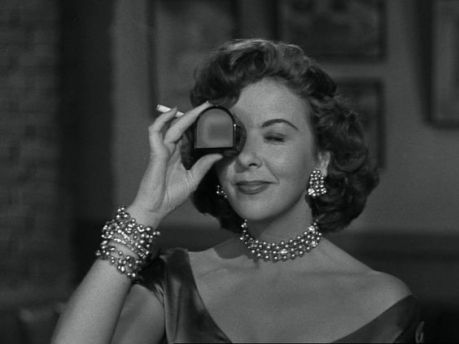 I absolutely loved the way While the City Sleeps begins. It starts with the murder of young Judith Felton (Sandy White) by the Lipstick Killer. We don’t see him killing her, but the shadow covering her face and her scream are good enough clues. Then, after the scream, the opening titles start with the score by Herschel Burke Gilbert, and that really puts us in the mood.

I love how a television vibe is given to this film. It matches well with the milieu in which the characters evolve. And this beginning is a good example, not only because the opening credits appear after the scene, but also because Gilbert was a prolific music composer for television in the 50s and the 60s. (2) Gilbert also composed the score for Fritz Lang’s last American film, Beyond a Reasonable Doubt. (3) One will also notice the significant presence of screens throughout the film, which gives place to some interestingly composed shots, such as this one:

In one scene,  Edward Mobley also uses his role as a television man to address himself to the murderer. He doesn’t know yet who he is, but it turns out that he has a pretty good idea of what type of man he could be. As he describes him as a “young man” with “dark brown hair”, a “mama’s boy”.  He tells him that he reads comic books and who are his known victims. That is done during one of the news bulletins, and Mobley uses the second person pronoun to talk as directly as possible to the murderer. While watching the news report, Manners becomes more and more upset that his identity might be discovered. It’s probably one of the best scenes, in my opinion.

The fact that we also know who is the murder from the very beginning of the film gives a noteworthy dimension to the way screenwriter Casey Robinson developed the story. Since we initially know more than the characters about the identity of the murderer, the story is not so much about who the murderer is but how the characters will unmask him. It’s similar to the Columbo formula.

If you watch While the City Sleeps, the Lipstick Killer will probably remind you of another on-screen killer. Yes, there are a lot of similarities between him and Bruno Anthony (Robert Walker), the villain from Hitchcock’s Strangers On a Train (1951). They are both young, mama’s boys, don’t seem to like their fathers, and use their hands as a mean of killing. However, the main difference is that Bruno is portrayed as a more sympathetic and social person. Robert Manners is none of that, and the fact that he doesn’t have any direct interactions with the main characters prevents him to create a meaningful connection with them like Bruno Anthony does with Guy Haines (Farley Granger). We do feel sort of sorry for Anthony, but not so much for Manners.

Fritz Lang’s film was based on the novel The Bloody Spur by Charles Einstein which, as a matter of fact, tells the story of the real Lipstick Killer,  William Heirens, a man who confessed to three murders in 1946 and spent 65 years in prison. He received such a nickname for writing messages with lipstick on the scenes of the crimes just like it is shown in the film when the first victim is found. 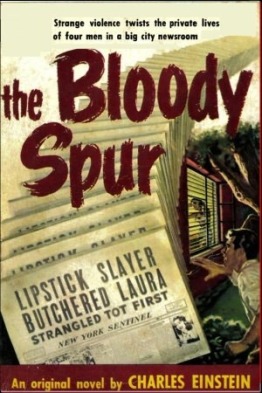 If you have yet to see While the City Sleeps, I encourage you to do so as soon as possible. With such a cast and a thrilling story, you are in for a treat.

Many thanks to Gill and Cinematic Catharsis for hosting this blogathon in honour of the iconic Vincent Price. Make sure to check the other entries here: 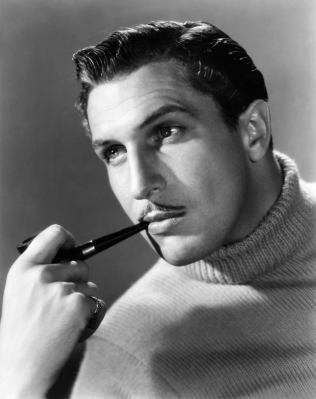