I don’t remember when was the last time I read a book so quickly. Indeed, I read Gene Tierney’s autobiography Self-Portrait in about a week. It’s not very long, 300 pages but small pages. But most of all, I read it quickly due to its greatness. I read the French version, which is well-translated and has a lovely title “Mademoiselle, vous devriez faire du cinéma” (“Miss, you should be into movies”). This is something movie director Anatole Litvak told her as she was visiting Warner Bros. Studios with her family when she was 17 and back from two years of school abroad in Switzerland (which explains her ability to speak French). Imagine! This didn’t happen to me when I visited Paramount Studios a few years ago! But times have changed. In the 30s, if you visited a studio, you’ll see it in full action. Now, its pretty empty. That same day, Gene wasn’t only invited for a screen test, but she also assisted to the shooting of a scene of The Private Lives of Elizabeth and Essex with Errol Flynn and Bette Davis. 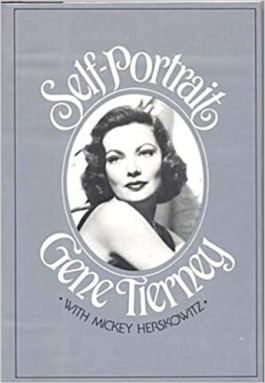 Gene’s father was a bit reluctant that she should pursue a career in cinema but her mother was more enthusiast and became an important part of Gene’s life. Gene decided to do things the right way and started on stage in order to develop her talent and not only be hired in films because of her pretty face. Her first films weren’t very successful and Gene wasn’t too happy with her voice that sounded like Minnie Mouse (that’s what she claimed) which pushed her to start smoking to change her voice. Her real break was with Tobacco Road, a 1941’s John Ford picture. But Gene’s most iconic role is probably the mysterious Laura from the film of the same name directed by Otto Preminger and released in 1944. Gene was also seen in beautifully unforgettable films such as Leave Her to Heaven (her only Oscar nomination, which she lost to Joan Crawford for Mildred Pierce), Heaven Can Wait, The Ghost and Mrs. Muir, The Razor’s Edge, etc. Like many people probably, I discovered her via Laura while I was traveling to San Francisco (I watched the film on the small screen on the plane). But I would say that my favourite film of hers is Heaven Can Wait and my favourite performance might be the one in either Leave Her to Heaven or The Ghost and Mrs. Muir. Two lesser-known films, Secret from Convict Lake and Close to My Heart are worth watching too.

But let’s focus on the autobiography itself. If you love Gene, by all means, read that book. It’s a charming, touching and somehow upsetting piece of writing. Upsetting because sweet Gene didn’t have an easy life. She spent time in mental institutions after giving birth to a mentally disabled and deaf little girl, Daria. Her second daughter, Christina “Tina” which was also the daughter of her first husband, fashion designer Oleg Cassini was in good health. Gene does something admirable by discussing it in her book because this is probably not something easy to talk about. She gives us a true vision of what it is to leave with a mental illness which is more interesting than something written by a doctor. It’s a true testimony. She doesn’t try to embellish the thing and she doesn’t try to play the victim. For instance, she didn’t believe in this theory that the lack of maternal love or too much of it could be the cause of mental illness. She also talks about the electroshocks and doesn’t praise them at all. This was a time where these were very much used in mental institutions but Gene, in hindsight, was able to realise that these were more harmful than anything else. They give you an illusion of well-being but this is often only temporary and what I just said: an illusion.

This photo of a pregnant Gene is one of my favourite ever. She looks fresh and beautiful like a rose!

I think what I liked the most about this book is how Gene talks about the people around her. She was a very sensible and intelligent woman and had a lot of good things to say about her peers. She rarely talks about someone in wrong terms (the only one I remember is when she calls Margaret Sullavan a “snob” but she doesn’t really develop the subject). But for most of the parts, Gene said beautiful things about the people with whom she worked. She didn’t have that unhealthy spirit o competition. For example, when she was nominated for Leave Her to Heaven but Joan Crawford won instead, she saw the good side of things and was glad she had received at least a nomination because that means a lot in the life of an actress.

Gene’s tell us about her relationships with John F. Kennedy and Prince Ali Khan but always in a modest and humble way, just like she talks about the difficult relationship with her father. Gene is not one of those biographers who only focuses on her and I liked the book for that. What I particularly admired is how she developed a friendship with people who had a lot of “enemies” in Hollywood. I’m thinking, of course, of the “elusive Howard Hughes” as she calls him or Otto Preminger whom, from what I’ve heard, had this reputation to be a very difficult movie director. But I think Gene knew how to be appreciated and also respected. She tells us her faults and how she could have been odious during and disagreeable during the shooting of a film due to her mental illness. But she actually never blame anybody for that. She considered herself the only responsible. When it was happening, I don’t know, but at least it was the case when she was writing her book.

We also understand another beautiful thing thanks to Gene’s autobiography. She was one of those actresses who loved her profession. The fact that she decided to develop her talent on Broadway instead of immediately going in the Hollywood business is a good example, but we can also think about the fact that she often says that acting made her felt better and that it’s when she was herself that she had difficulty to interact with people. There are a lot of actors for whom it was the case and this situation totally made me think of Ingrid Bergman who was a very shy person but incredibly comfortable at playing a multitude of characters.

Gene was also close to everyday people. She didn’t live in Hollywood (which was seen as an “odd” thing for a movie star). After a stay in a mental institution, she worked in a clothes shop for a time before going back to acting. This is not something you see often (especially not for such a glamorous movie star). And I loved the idea, how Gene chose to live a more “quiet” life for a moment. And this was totally a good decision because, from what I’ve heard, life in Hollywood is hard. 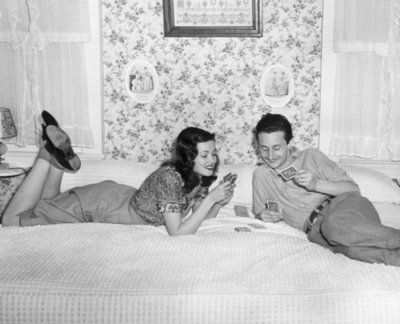 When I was reading reviews on Goodreads about the book, some people accused it of being a bit monotonous but I don’t think it was the case. Gene Tierney had the ability to write in a very elegant way and to punch the writing with fun, sad and thoughtful stories. She makes us live many emotions via her autobiography and, I must admit, that’s one of the rare books where I almost shed a tear while reading it! Her life was a sad but fascinating one at the same time. I was reading the book the way I would be watching a film, with a lot of visualisation in my head. I don’t know why, but I imagined her mother like Mrs. Morehead in The Women (George Cukor, 1939)!

Self-Portrait is a delightful book that gives you close access to a star that could seem inaccessible when you see her in Laura or Leave Her to Heaven, but who was, in fact, not so much. I give this book a ***** because I don’t really have anything negative to say about it.