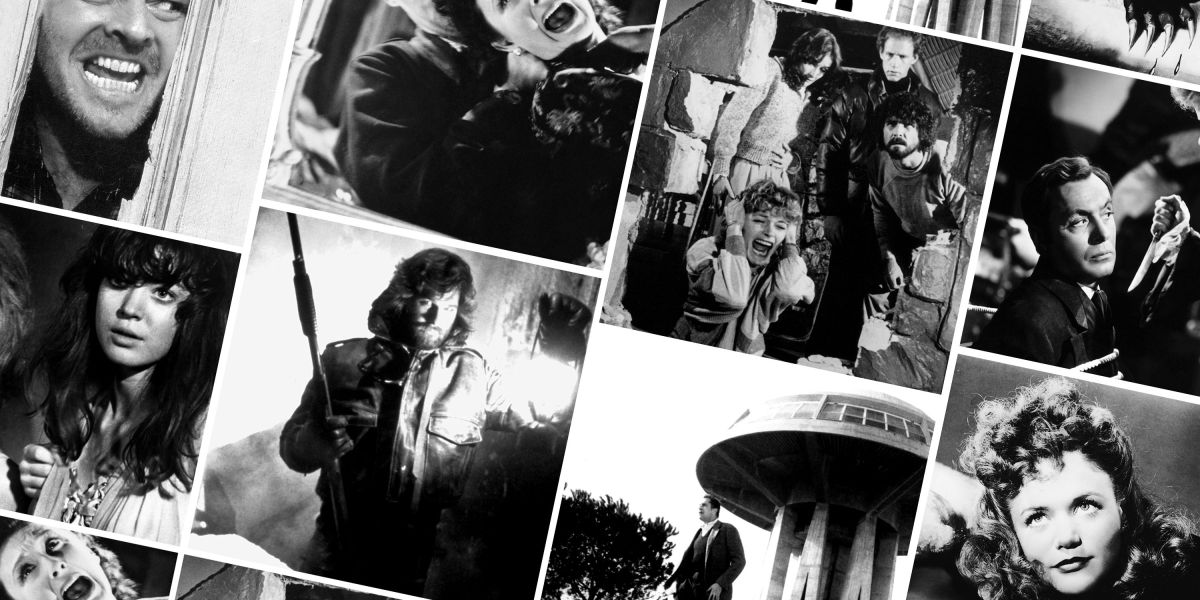 In 2016 and 2019, I used my blogging platform to give people ideas of films to watch during the Halloween season. I’ve decided to repeat the concept this year as I always love writing these blog posts. Plus, I’m killing two birds with one stone by making this an entry for Kristen’s 1st Annual Spooky Classic Movie Blogathon that she is hosting on her blog KN Winiarksi Writes.

I thought it would be nice to publish that a bit earlier than October 31st to give people time to choose a film if they ever decide to watch one (or many) on Halloween day (or before).

Before going further, here are a few disclaimers:

Without further ado, here we go!

If this list has to have a silent film, why not starting with a good old Buster Keaton comedy? Here, the comic star explores a house where all strange things are happening. However, there is an explicable reason behind that.

On one side, you have skeletons doing an epic dance. On the other side, you have the ghost of a walrus singing with the voice of Cab Calloway. What more can you ask? Of course, these are two short films, so even as a double feature, it wouldn’t make a very long Halloween movie night, but you can always watch them as an introduction to a feature film.

Like most of the films on this list, I watched Dracula quite recently (about time), but I have to admit, it didn’t become my favourite Universal Monster picture. However, it certainly is an essential Halloween film to see, and Béla Lugosi is so iconic in that role.

If you want to see Carole Lombard a pre-Twentieth Century (Howard Hawks, 1934) role, this film could be a good place to start. It’s not her best film, by far, but it’s an interesting one and proves Lombard’s range as a dramatic actress.

I watched this film last year just after publishing my 2019 list. First of all, I recommend you to read this review by Carol from The Old Hollywood Garden as it is really what made me want to see this film. Not long ago I watched its sequel, The Curse of the Cat People (Robert Wise and Gunther von Fritsch, 1944), thinking it would maybe make a good double feature. However, it isn’t so much the case. Don’t get me wrong, The Curse of the Cat People is great too, but it doesn’t really have a Halloween or scary vibe like Cat People (except for a few scenes). I would say it’s more a fantasy film than a horror film. Plus, part of it takes place during Christmas, so yeah, not so proper for Halloween!

That is another film I watched last year after publishing my recommendations and, OMG, I just LOVED IT! Dead of Night is a British anthology film directed by various people. Different spooky stories are linked to a unique base. Oh, and Michael Redgrave stars in it. This reason only should be good enough for you to watch it.

There have been many film adaptation from Oscar Wilde’s novel, and this is far from being the first one nor the last one, however, it’s maybe one of the best known ones. What I like about this film is the subtlety in which the main character, Dorian Gray, becomes a “monster”.

Creature from the Black Lagoon is a Universal Monster film that rightly belongs to the 50s. There’s just a feel to it.

Before watching Village of the Damned, I was not expecting much (just creepy children with flashy eyes like you see on this gif). However, it turned out to be much more eery that I would have thought! The introduction of the film where the village is pretty much “dead” is beyond great and really sets you in the mood. But I’ll let you watch it to live the experience!

Well, here German actor Karlheinz Böhm was pretty far from his role of young emperor Frank Joseph in the Sissi trilogy. Here, in a British trailer directed by no-other than Michael Powell, he plays a creepy psychopath who films his victims for a strange kind of revenge. The film is an underrated masterpiece AND features Moira Shearer (The Red Shoes) in an epic dance scene.

These two films were my introduction to William Castle, who is certainly an interesting director. Among the two, I would say that I prefered Homicidal, but Strait-Jacket is worth your time as well. Interestingly, Strait-Jacket was written by Robert Bloch, who also wrote the novel Psycho which was adapted by Alfred Hitchcock and became one of the most iconic horror films of all time.

Carnival of Souls is proof that you can do wonders even with a small budget. I liked the “simplicity” of this film and its complexity at the same time since many parts are the definition itself of mystery. And I really liked the main actress, Candace Hilligoss. However, it seems that her film career was pretty small. Too bad since she showed a lot of potentials.

Don’t Look Now was based on the short story by Daphné DuMaurier who, overall, liked this adaptation of her work. I liked the film much more than I would have thought and it allowed me to see another Julie Christie film. I had only seen her in one film prior to this one. It’s more a thriller than a horror film, but there are some pretty striking scenes and a glimpse of supernatural. The film was shot on location in Venice, which is another good reason to see it.

Thirteen years after BUtterfield 8 (Daniel Mann, 1960), Elizabeth Taylor and (the handsome) Laurence Harver were reunited in this thriller. Once again, this was not the best film of either actor’s career, and it’s a bit campy at time, BUT it has a fair amount of ingredients to make it worthy of a Halloween night: a creepy house, mysterious visions, actress Billie Whitelaw, a strange neighbour and a great plot twist!

I started this list with a comedy, so why not ending it with a comedy as well? Ok, that’s a total coincidence explained by the chronological order of the list, but still. Young Frankenstein is perhaps among the most famous films of this list, but if you haven’t seen it, I guarantee you’re in for a good laugh!

Well, that’s it for now! I hope this list will inspire you for a great spooky Halloween night!

I also invite you to check my recommendations from the previous years:

And you might get even more inspire by checking the other entries written for the blogathon, here.

Many thanks to Kristen for hosting!