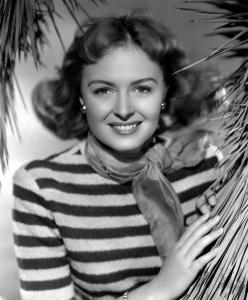 Today, on January 27, we celebrate the 94th anniversary of the late Donna Reed. Even if I have only seen three of her films (It’s a Wonderful Life, From Here to Eternity and Eyes in the Night), Donna Reed is one of my very favourite actresses. Well, for those who have seen my top 10, she is at the ninth position.

Like many people, I’m sure, I first discovered Donna Reed in the marvelous movie It’s A Wonderful Life (Frank Capra, 1946), a Christmas Classic that the American Film Institute considers to be the most heartwarming movie of all times. It’s true that it is a beautiful feel-good movie, a very human one, just like many Frank Capra’s films are. In this gem, Donna Reed plays the role of Mary Hatch, a young girl who falls in love with George Bailey, the protagonist of the film. They get married and Mary becomes a caring wife, always helpful when her husband has troubles. It’s a Wonderful Life was not Donna Reed’s first film, but it’s this movie that puts her on the path of glory. Mary Hatch, the character played by Donna Reed, is a sweet, funny and gentle girl, the kind of character that everybody loves. And Donna Reed performed this role with a great sensibility. What I also love about Donna Reed in this film, is that she seemed to have a very good chemistry with the leading actor, James Stewart. Some scenes show that perfectly: the dance at the gym, the lasso’s moon scene, the phone scene,  the wedding night scene, the ending and more.

In From Here to Eternity (Fred Zinnemann, 1953), Donna Reed plays the role of Alma “Lorene” Burke, an escort who falls in love with a soldier (Montgomery Clift) in Pearl Harbor (Hawaii), but also a woman who deeply wants to live a better life. This war movie won eight Oscars, including Best Supporting Actress. Of course, Donna Reed won this one! This was a very well-deserved award because it was a truly fantastic performance. You can see many subtleties in Donna’s acting and that’s what makes this performance so great. For example, I just love her tone of voice when she says to Montgomery Clift: “You’re a funny one!” This performance also shows us that Donna Reed was a very versatile actress, which always is a good privilege. That year, her co-star Frank Sinatra also won an Oscar for Best Supporting Actor. 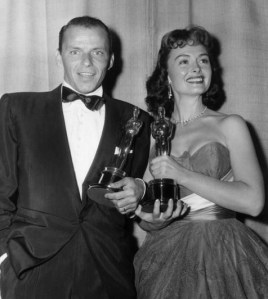 The last Donna Reed’s film I saw (today) was Eyes in the Night, also directed by Fred Zinnemann. In this 1942’s film also starring Ann Harding and Edward Arnold, Donna doesn’t have a big part but we notice her. She plays the role of Barbara Lawry, a 17 years old girl having a romance with Paul Gerente, the leading man of a theater play where she also works. But this man is the last husband of her stepmother. This one tries to stop her step-daughter because she believes this is not good for her. But one night, the man is killed and Lawry discovers the dead body. She first accuses her stepmother, Norma, but Norma’s uncle will help his niece and try to find out who is the murderer. That was another very different role for Donna Reed. She played brilliantly a very insolent teenage girl, but someone who, fortunately, still has a heart when she discovers that her stepmother didn’t kill Paul. This movie was made before It’s a Wonderful Life, where she played her first leading role

Of course, I may have seen only three of her movies, but let’s not forget The Donna Reed Show. This was Donna at her best. I discovered it not a very long time ago, but I watched several episodes and I can say, without hesitation, that this is one of my very favourite TV shows. And Donna has much to do with it! This is a sitcom telling the story of the Stone Family: the mother, Donna Stone, is played by Donna Reed; the father, Alex Stone, is played by Carl Betz; the daughter, Mary Stone, is played by Shelley Fabares and the son, Jeff Stone, is played by Paul Petersen. Here, Donna Reed plays the perfect mother. You know, the mother everybody would love to have: sweet, funny, gentle, comprehensible, calm, etc. This TV show was kind of Donna Reed’s come-back, because she didn’t really make any memorable pictures after From Here to Eternity. Donna Reed will, obviously, always be remembered as Mary Hatch, Lorene Burke, and Donna Stone. The Donna Reed Show lasted for a total of eight seasons and, in 1963, Donna won a Golden Globe for Best TV-Star Female.

So, as you can see, you don’t need to see much to admire the great Donna Reed. Of course, I would love to see more of her films. Fortunately, I found some of them on YouTube. So the next ones I’ll watch are They Were Expendable, They Rode West and The Last Time I saw Paris. And, of course, I plan to see much more episodes of The Donna Reed Show! Donna Reed was a wonderful actress, but also a wonderful person. During the Vietnam War, she became a peace activist and co-chaired Another Mother For Peace, an advocacy group with this slogan: ” War is not healthy for children and other living things.” Donna Reed, unfortunately, left us too soon at the age of 64. There will always be a place for her in my heart. Happy birthday beautiful! 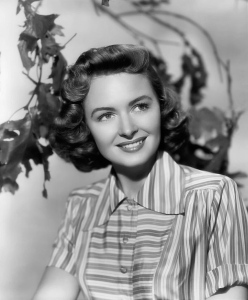 6 thoughts on “Donna Reed: What a Star!”