The Importance of Being Earnest. I never saw this famous Oscar Wilde’s play on stage, only on film and only one version: the 1952’s one directed by Anthony Asquith and starring Michael Redgrave, Michael Denison, Edith Evans, Joan Greenwood, Dorothy Tutin and Margaret Rutherford. Even if I haven’t seen all the on-screen versions of this comedy, I’m pretty sure this one is considered to be the best. Well, in general, movies that are part of the Criterion Collection are masterpieces.

The reason why I’m talking to you about this film is that, today, I have the great pleasure to participate in The 2nd Annual British Invaders Blogathon hosted by my friend Terence Towles Canote from A Shroud of Thoughts. As you may know, I love British Cinema, so this blogathon is a much enjoyable event for me. I had many ideas for films to write about, but I decided to go with The Importance of Being Earnest. Before I made my choice, I had only seen this film one time in my life but kept a good souvenir of it. It’s a film I enjoyed from the beginning until the end, and Michael Redgrave is part of the distribution. I love him. Actually, after The Lady Vanishes, this is my second favourite Michael Redgrave film and performance.

The Importance of Being Earnest takes place in the high society of the Victorian British era. The subject of this film is a double mistaken identity. Jack Worthon (Michael Redgrave), an aristocrat from the English country, pretends to be a certain Ernest when he is in London. During a journey in the capital, it’s under the name of Ernest that he’ll propose to his dear Gwendolyn (Joan Greenwood). This one has a fixation on the name “Ernest” and only want to marry a man with that name. Unfortunately, her mother, Lady Bracknell (Edith Evans) is not too motivated by the idea. When he is in the country, Jack pretends that he has a brother in London called Ernest. After his escapade to London, where he proposed to Gwendolyn, Jack is back to his place the country and announces to his ward Cecily (Dorothy Tutin); her governess, Miss Prism (Margaret Rutherford), and Canon Chasuble (Miles Milestone) that his brother Earnest has died. On his side, Algernon “Algie” Moncrieff, a friend of Jack and cousin of Gwendolyn, also “plays a game” like Jack. He pretends to have a friend named Bunbury that he often has to visit. But let’s get back to Ernest’s death. Algie, who is curious to see Jack’s life in the country decides to come to his place. Things get mixed up as he introduces himself to Cecily as Ernest, Jack’s brother! Of course, when he learns that, Jack is trapped. Algie, who falls in love with Cecily, wants to marry her. Happily, for him, she told him that they are already engaged thanks to a long correspondence. Just like Gwendolyn, Cecily thinks Ernest is a fascinating name and will only marry a man named Ernest. Things get even more complicated when Gwendolyn decides to come to the country. Her and Cecily both think they are engaged to the same man… 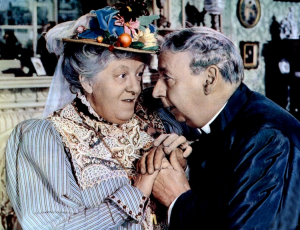 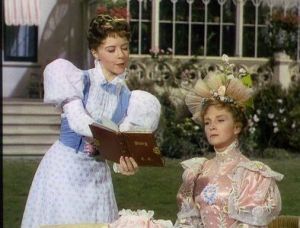 Well, I think this gave you a good overview of what The Importance of Being Earnest is. Moral of the story: be careful when you decide to have a double identity or create fictional relatives.

What I especially like about this film is that it’s SOOO British. Of course, with Oscar Wilde, you can’t go wrong concerning British style. The amazing distribution is one of the first things that makes this film a model for British cinema and theatre. All the actors play their character with a great theatricality that would not be suitable for all kinds of films, but, for this one, it’s perfect. The fact that it takes place in the aristocracy also helps it. They all talk with a very clear elocution and using many “pretty” and well-spoken sentences. Of course, Joan Greenwood and Edith Evans excel at elocution. Joan Greenwood’s voice makes me think a little of Deborah Kerr’s one. Of course, Edith Evans’s accent in this film is kind of funny because it’s too exaggerated. Let’s not forget her famous line “A handbag?!” when she learns that Ernest (Jack) has no parents and that he was found in a handbag as he was a baby. Anyway, I truly love the British accent, so, I was pleased with this film.

I also often enjoy movies that take place during the 19th century, such as this one, Gone With the Wind, The Heiress, The Innocents, The Man in Grey and some other. I guess I like this era. People’s good manners always fascinated me in these films and their costumes too. The ones in The Importance of Being Earnest are very colourful and eccentric, without being necessarily pretty. Let’s remember Edith Evans horrid purple dress and butterfly hats when she makes her first entrance. This kind of costume is here to symbolise a certain extravagance that was part of the high society during this century. In my opinion, the prettiest outfit is the white and blue dress worn by Cecily (Dorothy Tutin). It’s a lovely dress, but it remains simple. Cecily is 18, she’s more innocent than Gwendolyn, for example, so won’t look for attention so much. That makes me think: there’s something in Dorothy Tutin’s face that makes me think of Gloria Graham. Do you agree? 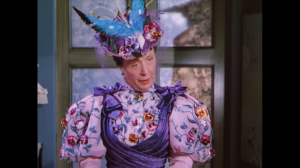 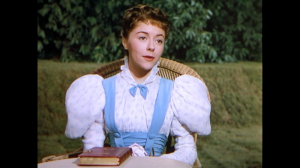 Four O’Clock tea, cucumber sandwiches, good manners, typical accent and a Rank Organisation Production are all the ingredients to make this film a great BRITISH comedy just the way I like it. The screenplay also plays a great role concerning the style of this film. All the credits first go to Oscar Wilde’s genius. Anthony Asquith participated to the screenplay for the on-screen version, but this one is largely faithful to the original play. Some great lines are ought to be mentioned and not forgotten once you have seen the film:

1- Miss Prism: The good ended happily, and the bad unhappily. That is what fiction means.

3- Lady Bracknell: Do you smoke?

Jack Worthing: Well yes, I must admit I smoke.

Lady Bracknell: I’m glad to hear it. A man should have an occupation of some kind.

4- Algernon Moncrieff: All women become like their mothers. That is their tragedy. No man does. That’s his.

So snobbish, but probably my favourite line of them all. That’s what I like about these dialogues: their absurdity.

Finally, what’s also interesting about this film is the fact that’s it’s seen through the eyes of spectators in a real theatre. At the beginning of the film,  A man and a woman, very well dressed, arrive at a chic theatre and sit in their theatre box. The man opens his program and that takes us to the opening credits. Then, the red curtain rises on Michael Redgrave taking his bath. The woman adjusts her golden binoculars. So, through them, we saw a bigger shot of Michael Redgrave. The binocular circles disappear and that’s how the play becomes a movie for us.

So, if you like British cinema or want to know more about it, this film is certainly not to be missed. First time I saw it, I didn’t know what to expect and was watching it for Michael Redgrave. Happily, I immediately enjoyed it and that was an occasion for me to discover other fantastic actors, but also an Oscar Wilde’s play. I had heard of him a lot but didn’t know much about his work. Well, that’s a movie, but I would love to see The Importance of Being Earnest on stage one of these days. Actually, not long before I saw the film, the play was staged in a Montreal. Too bad I missed it!

I want to thank Terence for hosting this amazing blogathon and giving me the opportunity to write about another British film. You might like to check other reviews of British Films: Please Turn Over, Murder!, The Lady Vanishes and Madness of the Heart.

Also, if you love British cinema as much as I do, I invite you to join my Facebook group: Classic British Films and Stars.

Of course, don’t forget to read the other entries written by many talented bloggers for this blogathon: 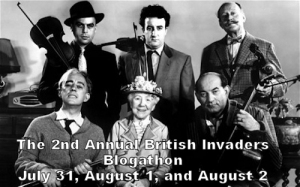 8 thoughts on “The 2nd Annual British Invaders Blogathon : The Importance of Being Earnest”