We have a smithy at our country house. Yes, yes. We don’t use it anymore as no one alive in my family is a graduated blacksmith (!) but the woman who gave us this house (my grandfather’s cousin) was the daughter of the village’s blacksmith. She was quite a character and would put posters in front of her house written “damn flower thieves!”.  The smithy is a real Ali Baba’s cave in here. There are plenty of horseshoes or any type metallurgical tools you can take as a souvenir if you even visit. The chimney is still here and the pigeon loft too, but, fortunately, without the pigeons.

So, with a blacksmith ancestor, movies with blacksmith characters are, of course, of a great interest, especially when the dynamic Buster Keaton plays the role.

With The Blacksmith, a 1922 short he co-directed with Malcolm “Mal” St. Clair, Keaton makes twenty minutes of screen appear like 2. From the very beginning until the end, we never get bored.

The story is simple. Buster Keaton is the assistant of a cartoonish-looking blacksmith (Joe Roberts). After a fight with Buster, this one is brought to the police station for a short time. Meanwhile, Buster receives various customers but all he does in his attempt to help them is to create several catastrophes. They eventually seek revenge, as well as the blacksmith who eventually gets back to work.

Buster is introduced to us next to a palm tree. And that’s how the first gag of the film is installed. The camera makes a pedestal up from the base of the tree to the top. It goes up and up and it seems it’ll never read the top. Then, an extreme wide shot allows us to see how short Buster is in comparison to this tall and thin “top model” tree.

The smithy is a picturesque place where strong men are needed to forge metal. Buster is only an apprentice here. His superior unfortunately takes advantage of his strength to be brutal with the poor Buster.

It’s interesting how the film is basically a succession of gags and new encounters. Ah! Customer service…

With physical or visual comedy, Buster amazingly knew how to make everything on the movie set participate to the gag. For example, toward the beginning of the film, Buster is outside the smithy with a wheel we suppose has to be placed somewhere. But, suddenly, it “flies away”. The same soon happen with the sherif’s gun and star. What is that mystery? With the help of a wide shot, the public is actually the first one to know (and to laugh at the confused characters). And then, clumsy but smart Buster realises that the lost metallic objects were in fact attracted by the giant horseshoe that decorates the smithy: this one is magnetic! Don’t ask me why! 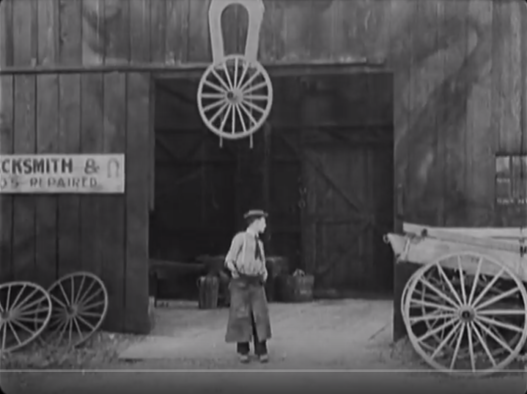 While watching The Blacksmith, I realized that one of Buster’s main quality in his acting game was his confidence. He indeed seems very sure of himself in what he does, even if he has to play a confused man. Every gesture is made with an incredibly calculated precision and with an impressive tact. Because of this, his acting game remains very natural but yet necessarily expressive for a silent film. Remember when Kathy Selden (Debbie Reynolds) mocks the exaggerated mimics and facial expressions of silent film stars in Singin’ in the Rain? Well, Buster is the total opposite of this and that’s what makes him unique.

Buster Keaton shows this assurance perfectly well in the white horse scene. A woman has arrived with her horse who needs “shoes”. We suspect the horse’s name probably is “Pâte à Choux” or “Lord Danderfeet”. The animal is a very capricious one and it’s hilarious. Buster shows it various pairs of horseshoes and basically asks it what it thinks of them. Several times, the horse nods with disapprovement. Eventually, the horse finds what he likes and expresses a sweet happiness as he admires his new feet in the mirror Buster has brought him. “He” knows what he wants! But it doesn’t stay pretty as Buster eventually dirty it with some tar. But as the horse owner is very supercilious, Buster let her go without saying anything. Serves her right!!!

Eventually, another lady arrives with a black horse. Her back hurts so she needs a new saddle and the one Buster gives her is impressive. It’s a high bouncing saddle and it takes the woman all her energy to climb on it.

There’s a situation that I won’t ever understand in this film. What is Buster doing with his pocket watch? Does he wish to fix it with these big blacksmith tools?? While he goes about his business, an alternative montage allows us to see the woman with the bouncing saddle riding in the country. She goes fast and seems quite satisfied with her new toy.

The irony of Buster Keaton’s humour continues in this scene where he has to take care of a rich dandy’s car. But clumsy Buster completely ruins it. The irony resides in the fact that, while he is fixing a ridiculous looking car, the beautiful car loses all its value. Well, it’s never a good idea to use a fancy car to nail a nail. Oh, Buster…

I mentioned before my appreciation of Buster being able to give us just the right dose of facial expressions to his acting. While I was watching the film again yesterday for the blogathon, I noticed a moment in his acting in which I had never paid attention before (ok, I hadn’t seen the film 10 times before either) and it’s just a priceless moment. The horse with the bouncing saddle comes back to the smithy but without the lady on it… In the frame created by the silly object, we see Buster noting the situation. And his facial expression is just perfect. You know that confused “what the f***” type of face, with eyes moving from left to right and from right to left. Well, Buster does it perfectly. Yes, Buster Keaton indeed was a silent film actor who knew how to use his eyes in his acting game and created amusing situations with them only. 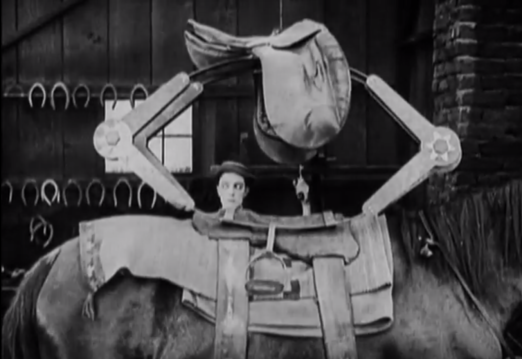 As always, there are too many things to say about Buster Keaton’s films, even with a 20 minutes long one. But I don’t want to spoil all your fun and will let you watch it before I hope my big mouth and tell you the ending!

This post was written for the Fourth Annual Buster Keaton Blogathon hosted by the amazing Lea from Silent-Ology. It’s always a pleasure to discuss the silent film icon’s films! Their details make them worthy of very interesting discussions and reflections!

Don’t miss the other entries!