It’s that time of the year again! One of my very favourite blogging events, The Annual Buster Keaton Blogathon is back for the 6th time! Hosted by the Lea over at Silent-Ology, this is the occasion for Keaton fans like me to share all kind of thoughts about this genius and his prolific on-screen career. To tell you the truth, I almost missed the announcement for this year’s edition, but I’m glad I was able to catch it just on time! For my contribution to this year’s edition, I’ve decided to re-explore one of Keaton films that I hadn’t seen in a long time: Day Dreams, a 1922 short comedy co-directed by Buster Keaton and Edward F. Cline. The film stars Keaton himself (well, of course, it does) and features Renée Adorée and Joe Keaton in supporting parts. The last time I watched Day Dreams was in a film history class in CEGEP, so approximately seven years ago. I didn’t remember much about the film, but I remembered liking it.

Day Dreams introduces Keaton as a young fellow daydreaming about his love life. He goes to his girlfriend (Renée Adorée)’s place to ask her father (Joe Keaton) for her hand, but this one is resilient and doesn’t seem to trust Buster much as he hasn’t got a job. Buster makes a bargain with him: If he succeeds to start a working career, he would have permission to marry his beloved one. If not, he would have to shoot himself (the father volunteers to lend him his gun – so generous..!). Keaton then goes on job exploration, and the film is a series of scenes showing Keaton doing all kind of un-reputable jobs. However, he sends letters to his future fiancée telling her about the great things he’s accomplishing, from a being surgeon to a Wall Street businessman to a great Shakespearian actor. Of course, all this consists of a bunch of white lies. For example, when he writes to his fiancée-to-be that he’s “cleaning Wall Street” he doesn’t give many details, which let her assume that he indeed works as a businessman solving economic problems. Well, he’s, in fact, REALLY cleaning a street (that doesn’t look much like Wall Street), with his broom and his garbage can. Not as glorious as we would have imagined. Keaton doesn’t only attract low-rated jobs, but also a ton of troubles, including being chased by a bunch of policemen. 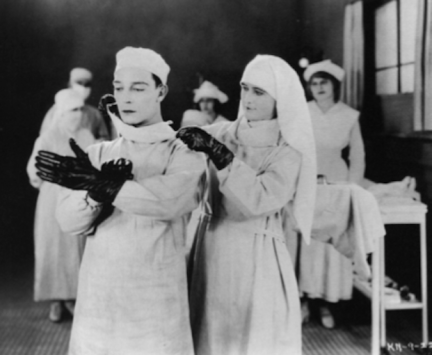 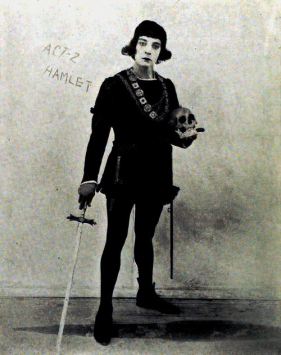 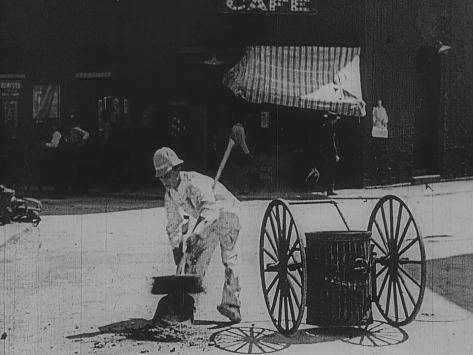 Sadly, Day Dreams, and this is something I didn’t remember, is now considered a partially lost film. Therefore, a few original scenes are absent from the film, many of them being those presenting Buster as the successful man he claims to be in his letters. Luckily, the restored version I watched on YouTube replaced these lost footages with a quickly written description of the scenes and still images allowing us not to lost track of what is going on. Lost films are, unfortunately, something that happened too often during the silent era. This could be explained by the care for preservation (or rather, lack of it) that people had at the time. Fires caused by nitrate films were a major problem but not the only one. I myself did little researches on film preservation and how it changes with the arrival of digitization. Writer Richard Butsch explains in his book Screen Culture: A Global History how the care for film preservation is only quite recent in cinema history, mainly because films were, first and foremost, seen as entertainment and something produced rapidly, not yet as an art. (1). That care for preservation indeed become more present when cinema reached a status of art. Therefore, there has been a lot of negligence, but now, Keaton films are considered masterpieces and important pieces of Silent Film History. Sometimes, prints are just lost, not destroyed and are then found decades later in unsuspected places. 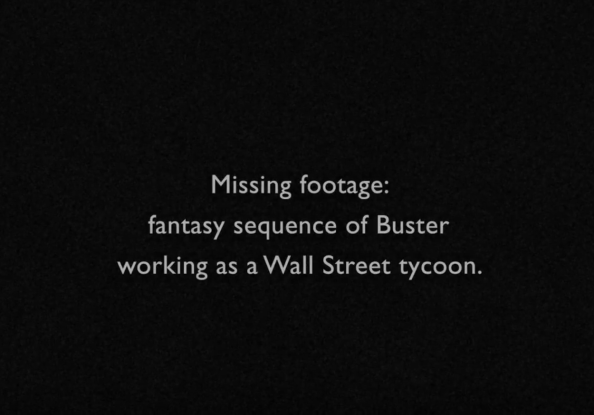 I would not say that Day Dreams is necessarily Keaton’s best film. The story works well and is perfectly scripted for 20 minutes but, I wouldn’t say that it made me laugh or amused me as much as other Keaton films. Memory playing tricks, I believe I probably appreciated more the first time I saw it. That being said, it remains worth watching for featuring some unique gags. There isn’t a handful of them, but some are quite unforgettable. For example, I had completely forgotten that this was the film featuring the famous daredevil moment showing Keaton running after a cable car and managing to get into it while it is still rolling. Ah! The things this little man did for our own entertainment, risking his life numerous times. I raise my hat to him. There is also a scene where Keaton gets on a boat while he is trying to escape the policemen chasing him. When these manage to get on the boat as well, Keaton goes hiding on one of the paddle wheels of the boat. When it starts moving, Buster is trapped in it, like a hamster in its wheel. I wonder what were Buster’s ways of relaxing after a day of shooting. It feels like this man had all the energy of the world concentrated in every inch of his body, but it’s a way of life that probably demanded a lot of self-reflection in order not to get completely exhausted by it, mentally and physically. Finally, in terms of gags, one that amused me a lot, and that I thought was executed in perfect Keaton-fashion, was the one where he pretends to be a mannequin in order to escape the cops. It’s simple but efficient and a hilarious sight for the viewers who become his accomplices. 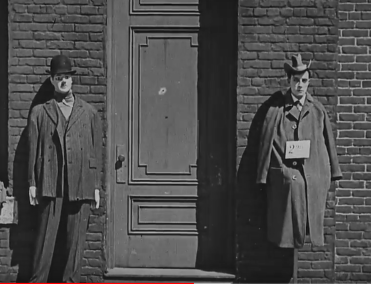 Because yes, we always take Keaton part while watching this film! Who wouldn’t!? When he runs, trying to escape the policemen, we root for him, thinking “run Buster, run!” When he looks for money pants’ pockets, we are hoping he would find some. And [SPOILER ALERT] at the end of the film, when he tries to shoot himself with the revolver, we are glad he misses because he couldn’t have done so much in such a short amount of time to end his life in such a brutal way. [END OF SPOILER] As usual, Keaton’s acting remains impressively natural for the period. That’s one of the things I like the best about his films and him; the acting was well-calculated and the actors, not just Keaton, managed not to be too theatrical. Buster was the man with the solemn face, and it was all to his advantage,  and I believe a good way for contemporary audiences to appreciate his films and relate to them despite being made decades ago.

Interestingly, the film also features Joe Keaton, Buster’s father as well as Joe Roberts in a small scene. I think Keaton fans would recognize Roberts’s face everywhere as he appeared in Keaton films more than once. He was more precisely in 16 of Buster short films. (2) Joe Keaton also shared the screen with his son a few times. Renée Adorée, who plays the girl, was a French actress who worked as a dancer and became reputed before becoming an actress. (3) Day Dreams was only her fourth film. She managed to successfully make the transition to the talkies but, unfortunately, starred in only two full-talking films before her premature death in 1933 at the age of 35. (4) 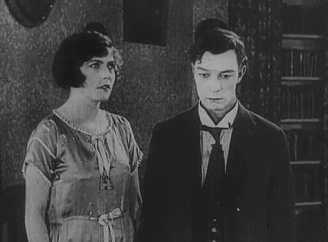 While I was watching Day Dreams, I was reflecting upon the fact that we never really know where Keaton films take place. Of course, it is sometimes easy to guess, but it’s rarely explicitly said. In Day Dreams, we assume that, at one point, he might be in New York during the street cleaning scene, but then, during the chase scene, he seems to be in San Francisco if we look at the inclination of the streets and the presence of cable cars. IMDb indeed confirms that the chase scene was shot in San Francisco (5). So, we assumed that, according to this list of shooting locations, he probably used LA studios to portray the other exteriors. If we only consider the fact that his character moves from New York to San Francisco (regardless of the shooting locations), this adds a bit to the irrealism of story. First of all, his girlfriend believes he can become a reputed surgeon-businessman-Shakespearian actor in a short time and without any apparent university background. Well, each time she reads the letter, she’s mostly seen sighing. We are never really sure that she does because she misses him or because she can read between the lines and is just sighing out of discouragement. Then, if the film takes place in New York and San Francisco, well, Keaton certainly moves places in such a short amount of time! Well, we guess his jobs last only one day, although it is never really explicitly said either. 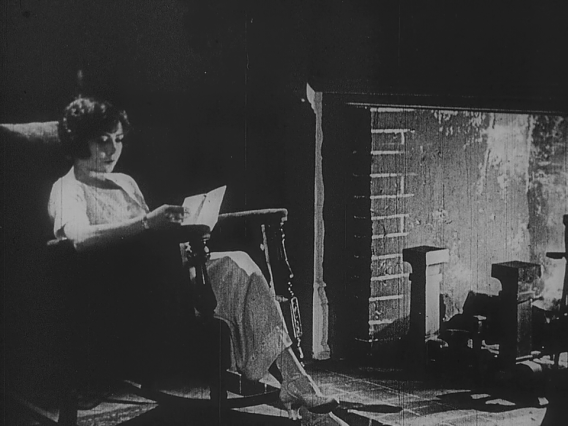 I think one of the qualities of this film and one that Keaton managed to often add to his work is the presence of interestingly-composed shots. Silent films were indeed very visual, so these had a good reason to be. One of my favourites is the one where two policemen are chasing Keaton and eventually get trapped on a precariously-placed ladder. The camera shows an ensemble shot of them on the ladder and Keaton on the ground looking at them. I love the contrast between the character’s dark clothes and the white and very squared building. This scene also makes us realise that, for once, it’s not only Keaton who gets involved in some dangerous and acrobatic stunts!

And talking of visual aspects, I liked how one of the shots of Keaton next to the theatre where he’s been “working” let us see a poster of silent actress Constance Talmadge, sister of Norma and Natalie Talmadge who was, at the time, married to Keaton. It’s not something everybody will notice, but it’s a fun little detail!

It was fun watching Day Dreams again even if it didn’t necessarily reach my expectations. But then, regardless of the film, I always find it fascinating and stimulating to discuss Keaton’s work and learning more about it!

And if you want to watch the film, it is available on YouTube!

Many thanks to Lea for once again hosting this blogathon celebrating my favourite silent film star! You can read the other entries here.