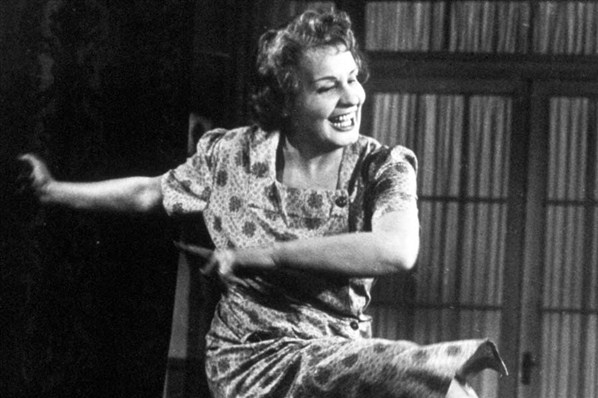 Movie heroines are not always princesses waiting for a prince to rescue them, they are not always victims or damsels in distress. Female movie characters can be strong, they can have guts, determination, and many other wonderful qualities. GIRL POWER! Is it clear? Well, because of movie business, a group of stereotypes was created around women, but these are only prejudices. Why am I telling you all this? Because, today, I’m participating in the Anti-Damsel blogathon hosted by Movies Silently and The Last Drive-In. This is a blogathon created to defy those stereotypes and honour the powerful women of cinema, those who really existed or simple movie characters. For the occasion, I’ve chosen to write about Lola Delaney, Shirley Booth’s character in Come Back Little Sheba ( Daniel Mann, 1952). Lola Delaney seems, at first, to be a weak lady, but I’ll prove you she’s not. 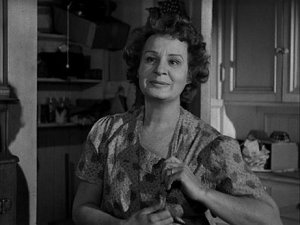 Lola Delaney (Shirley Booth) and her husband Doc Delaney (Burt Lancaster) are married and haven’t got any children. Doc Delaney is recovering from alcoholism but is still irritable. He is a member of the AA. Lola Delaney suffers from loneliness as her husband constantly has to go out. She has decided to rent a room for a student in need. The room is rented by the young Marie (Terry More), an art student. Marie is engaged to a certain Bruce (Welter Kelley). She is a young girl full of life and is greatly appreciated by both Lola and Doc. However, Marie sees another boy, Turk (Richard Jaeckel). Doc, feeling he has a great responsibility over Marie, can’t stand that she’s seeing another man when she is already engaged, especially a boy like Turk who, according to Doc, is probably no good to her. Doc will take this too personal and will return to the old deep darkness. Lola will have to handle the situation the best she can. The Delaney once had a dog, Sheba, who unfortunately escaped one day and never came back. Lola is always hoping it will be back. That’s why the title of this film is Come Back Little Sheba. As they have no children, Sheba was probably like her child. 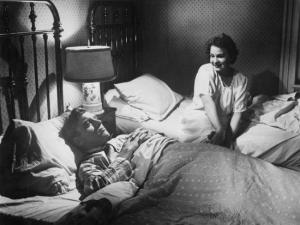 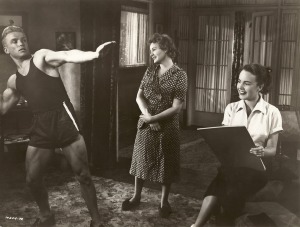 Lola Delaney is not the typical beautiful girl. She seems, at first, quite ordinary. She is a bit fat, she doesn’t comb her hair, she wears ordinary clothes. Anyway, she doesn’t seem to care that much about her appearance, but her beauty resides in her heart. Lola once was a beautiful lady, in her young years. She still has a certain charm but in a different way. Physically, the most beautiful things about her are her smile and her eyes. Eyes full of emotions: joy, sadness, fear, and hope. Lola Delaney is a woman full of compassion, for her husband, but also for the young Marie. Most of the time, when she’s having these emotions, she is feeling them for the ones she loves. She is happy for Marie, who will get marry soon, she is sad for her husband who seems unhappy. She knows how to share her emotions with others, and that’s the first great thing about her. Lola Delaney is a woman who will do everything she can to please someone. She always thinks of others before thinking of herself. These can be very simple, but appreciated actions, like giving a glass of water to the postman or organizing a dinner for Lola and Bruce. 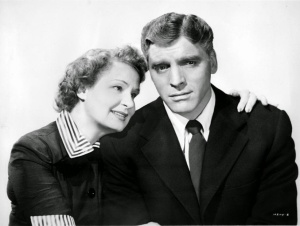 Some might think she’s doing too much. For example, Turk thinks she’s too invasive and even her husband sometimes seems tired to see her always around and will eventually ask for some peace. That’s because they don’t see everything she’s doing for them. Lola doesn’t cook the breakfast for her husband like typical women these days, but she’s doing much more. More subtle things, but those remains more important and significant than cooking a simple breakfast.

Lola Delaney is also a strong woman and she has a great courage, mainly because she has to live with an alcoholic husband. Of course, this one hasn’t touched a bottle for a year, but he is still fragile. As I said in the plot, he will return to the old deep darkness. [SPOILER ALERT] Yes, this is a metaphor to explain that he will drink again, unable to face the situation concerning her too protective feelings toward Marie. In one of the scenes, around the end of the film, Doc is back home. He wasn’t here for two days and Lola was terribly worried. He is back and completely drunk. He is terrible at this moment of the film, saying awful things to Lola and being very violent. He grabs a knife and it seems that he wants to kill her. She calls a friend of Doc, Ed (Phillip Ober), also a member of the AA, to come help her. Just when he grabs her throat, Ed arrives and Lola is trying to bring him back to reality, saying to him “That’s me, Lola!”. When he “seems” to realize what terrible thing he’s doing, Doc lets Lola go and faint. He is then taken to the hospital, for a cure and, when he’s back home, he tells him that he doesn’t really remember what he did, but whatever he said, he didn’t mean it. [END OF SPOILER]. 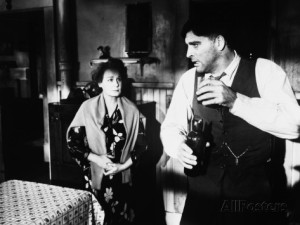 Lola is strong because she has to face a violent husband in this scene, but she doesn’t give up her love for him. She won’t stop loving him or won’t divorce him because of that. Why? Because she knows her husband better than that. She knows he can be cured and she knows that, when he’s not drunk, he is a lovable person. Because of her great love for him, she is able to see over his alcoholic problems and, as she knows him well, deep in her heart, she knows that he will always belong to her. Lola’s first objective concerning her husband’s problems will be to help him the best she can, not to reject him. At the beginning of the film, when they go together to the AA meeting for a special celebration: his first “anniversary” of non-alcoholism, Lola is very proud of her husband who hasn’t touched a bottle for a whole year and has a great feeling he can become the man he once was, before he started drinking too much. 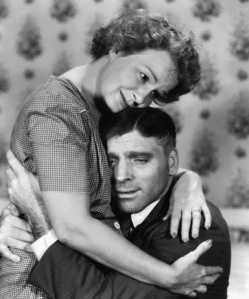 As I wrote at the beginning of my review, Lola is a woman who suffers from a great loneliness. Most of the time, she’s alone at home and seems to be bored. So, when Marie decides to rent the place she is very happy. That’s why she will do everything to please the persons walking into her home. She doesn’t want to lose them. Lola is generous, she really is. Another scene where she both proves her courage and her generosity is during the dinner scene with Bruce and Marie. She has cooked a delicious dinner for Marie, Bruce, Doc and herself. However, Doc is not at home and she hasn’t heard from him. She really worries and is unable to swallow anything. So, she decides to let Marie and Bruce eat alone together. She lights candles for them and serves them the dinner like if they were in a chic romantic restaurant. However, when she’s alone in the kitchen, we see her distress. She is afraid something bad happened to Doc. She doesn’t want to spoil the two lovers’ dinner by exposing her anxiety and smiles when she’s with them. 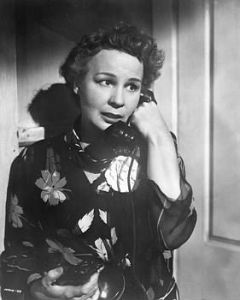 Finally, what I like about Lola is that she is a woman full of pep. She loves to listen to music and loves to dance. During one of the most beautiful scenes of the film, she dances with Doc in the living room just like in the good old days. He then sits on the coach and claps his hands while she is dancing with a great energy. They both smile and they both seem sincerely happy. That’s THEIR moment. Nobody can’t steal it from them. Unfortunately, this instant is abruptly stopped by Marie and Turk entering the house. Doc loses his smile and Lola comes back to reality. Too bad it doesn’t last… Doc certainly doesn’t appreciate Turk, but Lola knows how to forgive him. She knows he’s not the one Marie will marry. Fortunately, another beautiful moment like this will come at the end of the film, but I’ll let you see it by yourself. All I can say about this scene is that we KNOW Doc and Lola really love each other. In this final scene, Doc seems very proud of his wife and that’s beautiful and very touching. 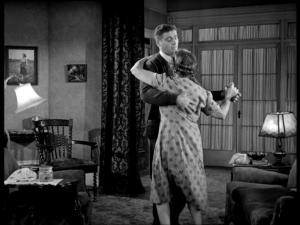 Shirley Booth was beyond incredible in this film. She won the Oscar for Best actress and that was certainly very well deserved. I must say, it is one of my most favourite performances by an actress. She plays the character with a great energy and is capable to share many emotions. She was perfect for the role and certainly can be admired by those who enjoyed the film like me. Burt Lancaster was also great as Doc Delaney, despite the fact that he was maybe too young for the role. Well, he was 39 at the time. That’s not THAT young, but he plays a 50-years-old man. Anyway, he still looks younger than Shirley Booth so that’s probably why people say that he looks too young for the part. On my side, I kind of agree, but, however, I really appreciated the fact that he was in this film, too young or not because he really is one of my most favourite actors. I enjoy all his performances. He truly was one of a kind. And let’s admit it, he aged pretty well. I would certainly like to see more Shirley Booth’s films because that’s the only one I saw so far. She is a less known actress than Burt Lancaster, but I’m sure it would be interesting to discover her. The film was also nominated at the Oscars for Best Supporting Actress (Terry More) and Best Editing. 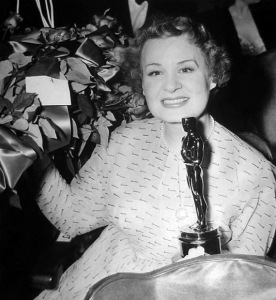 I must admit, when I started writing this article, I wasn’t sure I’ll have that many things to say, but I was wrong. Many ideas came as I was writing. Well, that always happens to me. I hope this article made you understand how Lola Delaney can be considered an anti-damsel and that you now see why we can highly admire her. Of course, don’t forget to read the other entries of this wonderful blogathon:

Thanks to Movie Silently and The Last Drive-In for organizing this amazing event! 😀 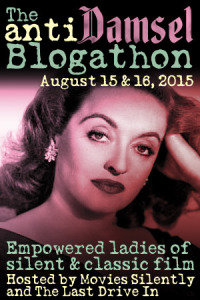 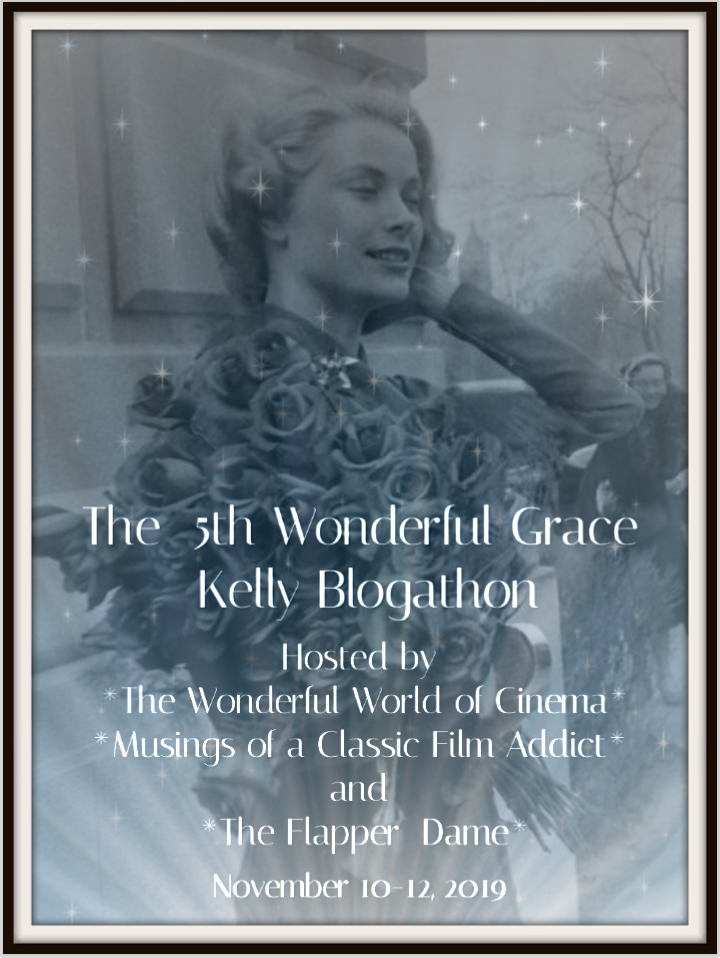 reflections on a golden era

You're ten seconds from watching an amazing film...

A smile — and perhaps, a tear.