Last year, in 2015 (which was not a long time ago), I made some great film discoveries, but, overall, I might have discovered what would be for me the best French movie of all times: La Grande Illusion. I watched the film thrice in a short time period and even had the chance to see it on the big screen in class (an unforgettable experience). So, of course, when Summer from Serendipitous Anachronism announced that she was going to host the France on Films Blogathon, this had to be my choice!

La Grande Illusion was directed by Jean Renoir, son of the great painter Auguste Renoir, and released in 1937. It stars Jean Gabin, Pierre Fresnay, Erich Von Stroheim and Dita Parlo in a short, but significant role. This film has the particularity to be the first non-American film to be nominated for Best Picture at the Oscars. Best Picture, not Best Foreign Film as this category actually didn’t exist back in 1937.

Jean Renoir’s film takes place during the First World War. The film starts when Lieutenant Maréchal (Gabin) and Capitaine de Boëldieu’s plane is crashed by Commandant Von Rauffenstein (Stroheim). By coincidence, the commandant happens to know Boëldieu’s family and invites both men to share a dinner. They later are transferred to a German POW camp. There, they meet a gang of nice French soldiers, including Lieutenant Rosenthal (Marcel Dalio) and Cartier (Julien Carett), an actor. They have a project: to escape from the jail. At night, they dig a big tunnel, often risking their lives. One day (before they had time to escape) they are transferred to another camp… Here, Boëldieu and Maréchal discover that Von Rauffenstein is in charge of the prison… Even if they have a privileged relationship with him, their idea to escape still occupy their minds.

I have to thank my grandmother for having talked to me about this film. She didn’t say much about it, except that it was a great film, but it made me curious to see it and I don’t regret I did. It’s simply one of the most beautiful films I’ve ever seen. It has the particularity, not only to be a war movie (or a POW movie) but, overall, to be an anti-war movie. This is expressed with all the film’s visual and narrative poetry. World War I and World War II were pretty different. In this film, we feel that no one had the desire to fight against the enemy, the French soldiers just like the Germans soldiers. They had to because it was their “duty”. Remember this scene when the German prison guard, Arthur, says that the war is lasting too long? Of course, this is just a movie and the reality might not have been exactly like this. The film also has the particularity to have been released only two years before the beginning of the Second World War. The world was feeling that something serious was about to happen, particularly due to the rise of the Nazism. Another great anti-war film released in the 30’s was All Quiet on the Western Front.

In the film, a flower is the symbol of this desire for peace.

La Grande Illusion amazed with its visual quality. The work of cinematographer Christian Matras) makes the film quite impressive. The clarity and the purity of the images are in harmony with some memorable camera shots and camera movements. There would be many to mention, but some grabbed my attention more than some others:

A camera shot that I particularly like is the one when the group of French prisoners is looking out the window. This one is first introduced to us with a  traveling showing us each of their faces. There’s something very strong about this shot. It sort of tells us that, as a gang, they can resist the enemy.

Finally, the final shot is one of the most beautiful I’ve ever seen. Without spoiling anything, it’s a long shot where we see Rosenthal and Maréchal walking in the snow. The contrast with their black coats and the immaculate snow is interesting and beauty is added thanks to the mountains in the background. 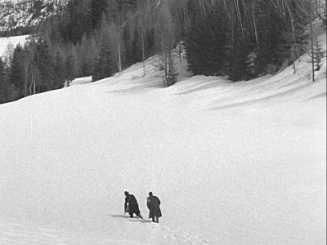 Except for its visual dimension, one of the strongest aspects of the film is its screenplay, and particularly its dialogues. I was watching the film and would have liked to note every line. There’s something so clever about them. One can say something very simple, but because of the way it’s said, it becomes unique, poetic, and quotable. The film makes an interesting contrast between drama and comedy. This is embodied by the characters and also by the screenplay.  Here are some examples, I’ve written them in their original language (French) and added an English translation. It might not be exactly accurate, but it’s just to help you understand:

This last quote is a direct reference to the movie title: La Grande Illusion. What is this title telling us? One of the most probable hypothesis is the fact that the war lasted much longer than what people would have thought. It was too long. I remember, in my history classes (a subject I excelled at), teachers often told us that, when the war started, people thought that the soldiers would be back home at Christmas. Of course, this didn’t happen and the war lasted 4 years and was devastating

La Grande Illusion allowed me to discover some great French and German actors. Of course, I had already seen Erich Von Stroheim in Sunset Boulevard, but in this film, he is different. He plays an “enemy” (as he is German), but, overall, a man with a great heart. He is less “cold” and more sensible than Max.

I also saw Pierre Fresnay before in the original version of The Man Who Knew Too Much, but this film allowed me to notice him more as he has a major part. I have to say, Pierre Fresnay’s performance is my favourite one in this film. He makes acting look easy and I absolutely love his character’s attitude:  very suave, debonair and clever. All this adds a great charisma to him. We believe in him.

Jean Gabin’s performance doesn’t disappoint either. I’m glad I’ve seen my first film starring this legendary French actor and I intend to see more. Gabin can be quite comic in this film or explode of anger. This proves his great versatility and adds a lot of “pep” to the film.

The only actress in this film is Dita Parlo, that we see during the last 20 minutes. This isn’t a lot, but it’s enough to notice and appreciate her. She first seems to be a serious woman, but it turns out that she’s only sad. Her joy is back, thanks to Rosenthal and, especially, to Maréchal. With her, life during the war seems lovely and the spoken language doesn’t seem to be a barrel to understand each other feelings. She has an absolutely lovely smile.

Of course, many other actors have to be mentioned for their unforgettable performances, such as Julien Carett in the funniest and craziest role of the film, Marcel Dalio as the man who is proud of its high society blood, Jean Dasté as the most innocent man ever, etc. 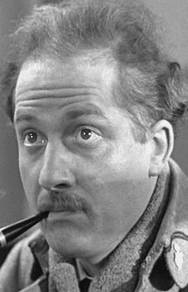 Finally, we can not talk about this film without mentioning its great score composed by Joseph Kosma. It dramatically adds a lot to the story and makes the film even stronger. Unfortunately, I couldn’t find an extract on YouTube, so I guess you’ll have to see the film. (Wait, if you haven’t, well you HAVE to).

One of my next Criterion’s purchase will definitely be La Grande Illusion‘s DVD. It’s a movie I believe I’ll never get tired to see. It’s brilliant and beautiful. I want to tank Summer for hosting such a nice blogathon and giving me the occasion to write about one of the most marvelous films of all times.

Here is the link to read the other entries:

The France on Films Blogathon

19 thoughts on “The Great Beauty of La Grande Illusion”